A Million Miles Away

A Million Miles Away

The shack sits like the hollowed-out shell of a dead insect. The inner walls bleed with rotten wallpaper, and the floor is a gray slab, with a single window overlooking a black sea. Emma’s face is pressed against the glass, and her youthful hair, white as freshly fallen snow, marks the difference in all that surrounds us.

“It’s always cold,” she replies, staring at something a million miles away.

She reaches a hand toward my face, and I take it with my own. Her hand is so delicate, as if it were made of papier-mâché. I brush it against my lips, but I can’t remember it ever feeling so weightless before.

I inspect her hand closer, feeling at the bones and knuckles. I squeeze her fingers. I exam her wrist and elbow, her arm, but it is just the hand. Then I look her in the eye. “It’s hollow.”

A week later and Emma is sitting between my legs on the hard floor, my arms embracing her. She’s staring out the window once again.

“Do you think there’s something out there, on the other side?” she asks.

“On the other side of the sea?”

“I like to believe there are flowers,” she continues. “Hundreds, thousands, millions of flowers. A sea of flowers, with different colors. A sea of colors.”

“That would be nice.”

“More than nice. That would be heaven, Joe. I could spend forever walking through those flowers.”

From the corner of my eye, I see a thin smile linger on her lips. She holds it for a minute before it melts away, like heated tallow.

“It always hurts.” She pulls at my arms, pulls them tight around her. “Except when I’m with you.”

I sit quietly, and listen. The breath of the sea wheels through the air like birds in flight. A large wave crashes onto the rocks below, and there is salt on the wind. I can taste it.

Sometimes I creep at night. I creep to Emma’s house, and listen to the sounds of that building, with its sprawling porch, yellow siding, and alabaster trim. There’s a three car garage and a fancy boat on the side, and Emma has a good life…

But it’s always raining at that house. There is always the sound of water trickling off the roof, and down the gutters. It’s always wet at Emma’s house, wet like the sea, when I stand there in the night, in the bushes, listening, and creeping. I try to hear the muted undertones inside, beyond the liquefaction and the restless wind, and sometimes, when I strain my ears, I think I hear Emma’s cries.

She hasn’t said much on this night, in the shack. She’s listening to the sea and the wind, and everything around us is black, and hollow. Everything is wrapped in darkness.

“What about the police?” I ask.

“The police?” The tone in her voice says as much.

“But he needs to stop. He’s killing you.”

She looks away. I have said too much, so I shut up and listen. I hear the wind outside, and inside, whistling through cracks and holes, pushing through vacant space. I think of her arms, how they are now husks of flesh—cracked and brittle, fragile to the touch. They would collapse into dust if she were to bear her weight onto them.

There are nights when Emma’s mother works the graveyard shift. These are the nights when the sky pours down rain. When sewers turn to rivers, embankments disappear, and the entire land becomes a deluge of madness. I can never hear what goes on inside Emma’s house on those nights, but I know. I know that this is when he drills her, pulls her insides out and replaces them with darkness.

It is after one of these nights when I see Emma again, at our favorite coffee house. She is sitting across from me, smiling for the company, but there is a world of emotion swimming in her eyes. Parts of her face twitch, and there is a slight tremble to her lips. She’s having a hard time breathing. It looks as if her whole body is on the verge of collapsing into dreadful tears. As if she is a cancer patient who has been living three weeks past her expected death date.

And she is hollow now, so terribly hollow. I suspect that it has spread beyond her shoulders, into her chest cavity. Perhaps down to her waist. Soon, it will advance into her legs, her skull, and then I will lose this poor girl of whom I love most dearly.

I decide right then to put a stop to it, damn Emma’s advice. At night, I wait outside the house, and catch the bastard as he’s taking out the trash. I have a lead pipe, and I hit him with it. I hit him real hard, as hard as I can, and the man grimaces. But then he hits me back, and he takes the pipe and starts to beat me with it. And suddenly, the world becomes a galaxy of supernovas. Then a black hole.

When I wake up, sometime later, I am lying in the rain-swept gutter with my bloody mouth, and my broken teeth, and a body of searing pain. Darkness and a heavy, heavy rain surround me, but even so, I can still hear Emma’s cries.

“You should have listened to me,” Emma says. Her voice is razor thin, and her eyes are on the verge of vacancy. They too are becoming hollow. Now, her whole body is trembling. She’s like a dead and brittle leaf tumbling against the wind.

“But you should have listened to me.” She looks out at the sea, while I look at her empty body. I had to carry Emma here, to the shack, as she cannot stand on her own anymore.

Fear plunges into my gut like a red-hot knife.

“Take me…I don’t want to be in the darkness anymore.”

Hands trembling, I pick Emma up and stagger outside.

“Over there,” she says, pointing.

I carry her to the cliff then set her down. I sit behind her, she is between my legs, staring out at the sea, and it doesn’t take long before Emma begins to flake away. Each gust of wind takes a small piece of her body. I am panicking, but try to remain calm.

“I think I can see the flowers now, Joe. Lots and lots of colors. So many colors.”

I don’t see anything, other than the great, black sea. But I believe her. I believe Emma. And by the time the night has bled the day of its light, all that is left of her is her head. She doesn’t say anything, just looks at me one last time with those vacant eyes. Then a final wind sweeps the dust out of my hands, and carries Emma to a place full of light and beautiful, colorful flowers. Some place a million miles away.

This story was originally published in 2014 in Nightblade Magazine. 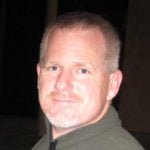 Chris Riley lives near Sacramento, Cal., vowing one day to move back to the Pacific Northwest. In the meantime, he teaches special education, writes cool stories, and hides from the blasting heat for six months of the year. He has had over 100 short stories published in various magazines and anthologies, and across various genres. His debut novel, one of literary suspense, titled The Sinking of the Angie Piper, was published in 2017 and his debut short story collection is forthcoming with Mount Abraxas Press. For more information, go to ChrisRileyAuthor.com.