It was late, he was tired, and focused on completing his bookings. The BestDeal4U screen kept timing out. All that typing of his name and home address and travel dates and conference title and passport number and guest preferences and dining options would be lost if he couldn’t remember the name of the damn hotel he wanted. He could picture the lobby as if it were in front of him, but the name just wouldn’t come. And she’d know, because she always knew, could always figure out what he was asking; she always seemed to have the answer front of mind to whatever it was he couldn’t remember this time. So, from long habit and without conscious thought, his hand had reached over, punched the code to unlock his phone, tapped the phone icon, her picture on speed-dial, the speaker icon …

Abruptly, as he heard it start to ring, he remembered why that wasn’t going to work this time.

The shock of it froze him in place while the ringing continued, no one there to answer. It took a long moment to collect himself, to reach over and stab at the hang-up icon. But before his finger reached it, there was a soft click, and a voice said, “Hello?”

He started to mumble, sorry, wrong number, but stopped, realizing he hadn’t dialed a number; he’d just tapped her image on speed-dial. They couldn’t have reassigned the number already, could they? Three days? That was cold.

“Pocket dialed, eh? Well, whatever. I have a minute, if you want to talk.”

“Sorry?” The offer startled him. Who talks to wrong numbers?

“Well, I already came all the way over to pick up,” the voice said. “Might as well make good on the effort.”

The voice was eerily familiar. Could that be her sister? He hadn’t thought to ask anyone what happened to her phone, so maybe her sister had taken charge of it.

“You okay?” The voice — which was very like her voice — sounded concerned.

“Um, yeah. Sure. Just didn’t expect anyone to answer. You know?”

“I used to get that sometimes when I’d pull the phone out from my purse.” She sounded bemused. “I guess digging around for it banged enough virtual buttons to dial a number. Got a guy from Brazil once.”

He closed his eyes for a moment. It was the sort of thing she would have said. Relate to validate. Show them you’ve been there, that you get it, that it’s no big deal. Put the person at ease; move on.

He couldn’t breathe, though. Reaching out to her, and her not being there … She would never be there again; he couldn’t ask her anything, ever again …

He took in a big, tremulous breath through his nose, as if to sniff back the tears. Half choke, half gasp—the sound of it was so stupidly dramatic that he snorted the breath out again, mocking himself. Three days of grieving, of struggling to get his head around what had happened, and one moment of absent-mindedness had made it real.

“So if you had meant to call me,” the voice said, “what were you going to ask?”

“I just wanted to know the name of a hotel. Couldn’t remember for the life of me. I just did what I’ve always done, and phoned.”

“The conference hotel? The one with that crazy lobby? It’s the Greenbay.”

“If that’s all you wanted to ask me?” the voice said. “I should be getting back. I’m not sure if I’m even supposed to be on the phone.”

“No, it’s okay,” he said, wanting to reassure her. “Somebody should answer it, to tell people what’s happened.”

It should be him, he thought. It was his job. This must be hard on the sister too, even if she’d been away for years. He should step up.

“Wait!” he blurted, sensing she was about to hang up. “Who is this?”

“But.” He shook his head, feeling terribly foolish as he heard himself say, “How is that possible?”

“No, wait! I have so many questions!”

“Your hotel’s the Greenbay,” she said again. “I’m glad I was able to answer that for you.”

“No! That’s not what I would have asked!”

And all at once, all the questions were there:

Why was she grossed out by dim sum, when she’d had no problem eating fried insects at the science center?

Where had she been the two weeks she disappeared after grad school?

The time the turkey had gone bad and they’d gone to the diner, was that their first Thanksgiving together, or the second? Because wasn’t the incident with the cranberry sauce the first year?

Where was his old Star Trek T-shirt? Did he even still have it?

The stories in that binder—were those . . . hers?

When they’d bought that wooden fish for their mantel from that woman in the plaza, had that been in Jamaica? Or was he getting that mixed up with the Bridgetown trip?

But the phone was fading to dark, a disc of light receding into the center of the screen until it was a single point, and then gone. 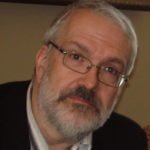 Robert Runté is senior editor with Essential Edits where he primarily edits speculative fiction. A retired professor, he has won three Aurora Awards for his literary criticism. His own fiction has been published in over forty venues and five of his short stories have been reprinted in best-of collections.