Zdenek had never seen an asteroid like this one. And he had seen a lot. Thirty years as a free miner, more than a dozen star systems, satellites, planets, asteroid belts, the Oort Clouds… But this was something new.

Sarika, too, was staring at the screen, leaning forward. Zdenek noticed tiny drops of sweat on her olive skin — on her forehead, cheekbones, and upper lip. He knew it wasn’t about the heat. The adrenaline rush in her bloodstream always made Sarika sweat.

Zdenek looked at the screen again. The asteroid was about fifty kilometers across and looked like an irregularly shaped hemisphere, flattened on the convex side.

“Shall we get closer?” Sarika asked. “I think we should scan it, but we are out of range here.”

Zdenek checked the distance. Six hundred and eighty kilometers. The effective range of the neutron scanner didn’t exceed two hundred clicks. Radar, of course, reached much farther, but radar couldn’t look inside this strange asteroid. But the radar indicated that it was safe to approach the hemisphere. The space was empty as if it had been vacuum-cleaned. Not a pebble, not a speck of dust, not to mention larger debris. Considering that they were technically in the outer ring of a gas giant, that was surprising.

Sarika looked directly at him, narrowing her eyes.

“Don’t you have any curiosity?” She asked sharply.

“I do,” Zdenek said, flicking the switches on the console. “I just don’t get paid for it.”

The ship shuddered gently as the geosectors kicked in. Zdenek touched a few more sensors and felt the acceleration gently push him into the anatomical foam of the berth.

Sarika was staring into the screens. They were almost at the needed position. After five minutes of braking, Zdenek again put the ship adrift, leaving inertia to slowly eat up the remaining distance.

The hemisphere’s surface, which seemed almost smooth from a distance, was littered with gigantic “warts,” each nearly two clicks in diameter. There were hundreds of them, a chaotic pile-up covering almost the entire hemisphere, leaving only a narrow space at the edges.

The edges of the hemisphere were decorated with many long protrusions. Despite Zdenek’s reluctance to make an analogy, his mind stubbornly tried to associate them with tentacles, especially since most of them either “dangled” or were “squeezed” under the hemisphere.

“Rika,” Zdenek called softly to the girl. The girl shook her head sharply, keeping her gaze on the screen. “Rika,” Zdenek repeated. “Warm up the scanner. We’re getting closer.”

Sarika nodded, and her fingers traced over the keyboard of the terminal. The ship was already coming within the scanning beam range.

“Synchronizing at one hundred and ninety-six,” Zdenek said, activating the geosector braking mode again. “Three, two, one… lock!” He switched the engines to autopilot.

Zdenek flinched at her loud cry.

Zdenek felt confused. He had thought a moment ago that one of the “warts” on the hemisphere had moved, but he put it down to a visual glitch. But they couldn’t have seen the same glitch simultaneously, could they?

There was no doubt. Now Zdenek saw it for himself. One by one, the “warts” began to move, to wiggle, smaller protrusions appeared and disappeared, as if… As if something was trying to get out of them.

“Zdenek, they are being born! This thing is alive, and it gives birth!”

He stared at the girl incomprehensibly.

“Back home on Ganymede, we had a large library of educational films from Earth,” Sarika said. “We used to watch them when we were kids. There was an animal, the toad, with such a strange name… Pipa! She carried her eggs on her back, and then her babies hatched from there… Zdenek, that’s her! They’re being born! LOOK!”

One of the warts burst, parting with uneven petal edges, and a “small,” only one kilometer in diameter, half-sphere with “furry” edges — a miniature copy of what they had recently thought was an asteroid — sprang out into the icy cosmic vacuum. It was followed by another, and another, and now the whole swarm of hemispheres gathered in a flock above the surface of their “mother.”

Something beeped loudly in the stunned silence.

“It’s a scanner! The beam is on!” exclaimed Sarika.

But it was too late. A beam of high-energy particles, accelerated to hyperlight speed, stabbed into the very center of the flock of freshly hatched “jellyfish.”
“Jellyfish” jumped in different directions, but not all of them. Several hung lifelessly, slowly settling onto the large hemisphere, drawn by its gravitational field. The hemisphere’s surface also rippled faintly, but the center, the part that had been struck by the neutron beam before Sarika hit the “off” button, remained perfectly still.

Zdenek and Sarika stared at the screens in silence. After a few moments, Sarika said:

“It’s a nest. Do you understand now why there isn’t even dust here? She cleaned the space because it’s a nest. A birthplace. And we…”

Zdenek opened his mouth to reassure her, but suddenly the mass detector started screaming. Something with a monstrous mass, several times the estimated mass of the mother jellyfish, was closing in on them, closing very fast.

“I’ve seen those school movies, too,” he said. “I don’t know about toads, but in many other species, the male often takes care of the female and her offspring. A big, strong male.”

Suddenly all the viewscreens went dark all at once. A giant shadow covered the gas giant, the mother with her offspring, and the entire sky.

The male came to protect his family. 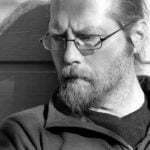 Nik Hein lives in Tallinn, Estonia. He started writing in high school almost thirty years ago, although until recently he wasn't too interested in publishing. Find out more at Nik Hein on Medium and Nik Hein on Vocal Media.