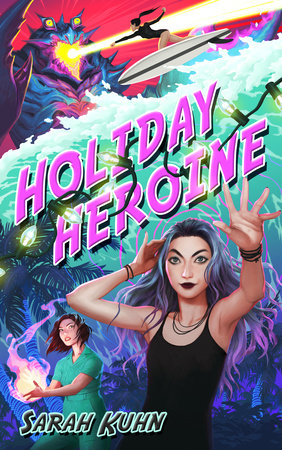 I remember, many moons ago, seeing a review of one of the Princess Diaries books that described it as “like reading a note from your best friend.” I didn’t happen to agree with that assessment, but it pretty much describes my feelings about Holiday Heroine, the sixth and final book of Sarah Kuhn’s acclaimed Heroine Complex series. Bea Tanaka, the titular heroine, is a chronically chaotic superpowered young Asian-American queer woman hailing from San Francisco — go Giants! — who has recently transplanted herself to Maui so that she can prove to herself and her found family/superhero team that she can run her life like a mature adult. We meet her as she struggles over whether she’s doomed to become a supervillain after an unexpected power-up at the end of book 5. Not only is it a believable and compelling internal conflict, but it’s also still clear that Bea has come a long way in her emotional growth since the start of the series. The fact that this is clear even though she wasn’t the viewpoint character for several of the earlier books only makes that more impressive. Refreshingly, this is not a story of Bea “growing up” and getting less chaotic: in fact, her ability to come up with off-the-wall plans becomes an important tool over the course of the book. But part of the trouble is that Bea knows herself well, and in a neat little twist, doubts herself more because she understands just how erratic she can be. Recognizing that others view the characteristics she perceives as weaknesses as strengths is an important, and satisfying, part of her development.

With every long-form story involving superpeople, you have to talk about power crawl. Short version: it’s good here. Often in long-running series, the main character’s ever-improving abilities end up making it difficult for the villains to realistically threaten them. While Bea starts the book as quite a powerful heroine with a good roster of victories under her belt, her own fear of and confusion about her newly upgraded abilities is what provides the tension, rather than the direct threat from the supervillainess — though there is a serious threat, don’t get me wrong. Her powers, her improvement, and especially her attitude about them are handled realistically, even while being fantastical superpowers.

Aside from its structural and character strengths, there were many smaller aspects about the book which I enjoyed as well. The sheer off-the-charts Christmasness? Fantastic. The sex scenes, which centered female pleasure and didn’t take over the narrative or get awkward to read? Excellent. The tiny cute kaijus? Phenomenal. The time travel? Stellar (seriously, far from getting bogged down in paradoxes and causality, Kuhn acknowledges those things and then goes haring off to do her own thing, and it’s great fun).

Do I have a few reservations? Sure. Characters are prone to giving emotional speeches about how much they care about each other without a trace of self-consciousness, and the supervillainess does, indeed, monologue about her evil plan. A bit of my brain spent a good amount of this book yelling “People don’t talk like this!!” but the rest of my brain sat on that part and yelled back, “I don’t care, I like it!!” Bea faces a moral quandary that didn’t feel at all like a quandary to me — though it is resolved in a manner that felt appropriate. There were stretches that felt too info-dumpy, even allowing five books of backstory to incorporate. But on the balance, even these cumulative elements weren’t enough to change my overwhelming appreciation for this book. It’s cheesy in the best, most Christmasy way, all the characters — on the side of goodness and justice, anyway — love and support each other 100%, and Bea herself has a marvelous arc to understanding and accepting her own chaotic, joyful, loving way of being. It helps that Kuhn’s prose is energetic and engaging, the supporting cast is large and well-fleshed out without being overwhelming, and Karens and supervillainesses alike are taken to task with great aplomb. The fact of the matter is that this book is fun, packs an emotional punch that caught me quite seriously off-guard, and is a tremendous finale on the Heroine Complex series.