An officer with a square-set jaw greeted us at our front door.

“Daddy, who is this man?” Myra asked.

“Oh, this kind gentleman is from the army,” I crouched by her side, “He’s here to take you to space camp.”

She stared at me with wide, innocuous eyes; the eyes of a firstborn whose lawful duty was to serve for five years off-world in the military. More importantly, the eyes of a daughter who does not wholly believe the truth, nor understand it, but cannot help but trust the word of her loving parents.

“Have a fun holiday, pumpkin,” I said, choking on tears.

Myra squeezed me as tight as she could while her mother passed her backpack to the serviceman. He smiled, dutifully. She sniffled, clutching Myra. They wept together, until the officer gently led our child down the pathway to the curb.

Over the tops of the neighborhood gleamed the upper struts of the launch pad, towering over rows of spotless prefabricated houses. Unified Earth flags stood sentinel on countless lawns, blowing mockingly in the breeze.

I watched Myra join other innocent faces in the convoy, all prepared for their holiday.

Fury bubbled under my flesh as her pale face pulled away from our street, the row of black SUVs fading to dots in the distance, like a chain of ants as they rounded the corner and climbed the hill to the launch pad.

This day was one I was dreading for seven years. Ever since I held the waxy black and white stills of Nora’s womb back then, a concoction of pride and anxiety swelling in my stomach.

My foreman rang the house earlier, giving the all-clear for my absence today; such is the way of the world now when your eldest is called up.

And that evening I stared heavenwards as the craft’s retros fired up and it ascended into the misty dark blue. I settled on the edge of the porch, watching it soar free of suburbia.

Every night I sit and impatiently await its return, as others do.

I did not anticipate the acidic sorrow that would fill my veins, casting red eyes over Myra’s room, a dark museum to her memory; a baseball bat slunk in the corner, her dolls arranged as she had left them, having a tea party. Her plastic crossbow with foam darts; her little brother Ryan has one too, but he is too young to understand why they are never played with anymore.

The Mathesons from No.10 pass me tonight, waving and smiling their sympathetic greetings. I’m perched here every night, and the neighborhood knows it. The neighborhood likes to discuss it.

“Conscription Day,” sighed Emmett Matheson, the last time they’d invited us for dinner, “It isn’t easy. But it’s our duty to the planet, and that’s something worth the sacrifice.” He’d led me into the study, and we’d shared a Scotch. I’d positioned myself near the window so I could watch the skies. “We can’t fight it, and nor would I want to— no, sir.” My gaze had wandered to the photo of him and his lad, a picture a decade old.

Tonight, I blow a kiss to the dying embers of the day as the milky yellow glow from the living room presses out against the gloom of the porch.

I just hope, pray even, that she had a brilliant day.

In the dusk, the spotless homes lining the street light like fireflies.

This was what we sacrificed for. 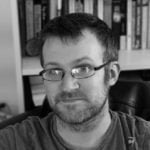 S.R Malone is a writer living just outside Edinburgh, Scotland. He has been published in Synthetic Reality Magazine, 365 Tomorrows and Entropy-Squared. When he is not writing or reading, he likes to spend time with his family and their dog, going for walks in the Scottish wilderness. Get in touch on Instagram: s.r_malone