Bobby knew he must be dead when he saw that he hadn’t spilled the detergent. Anybody who’d just taken a fall down the basement stairs the way he had couldn’t possibly survive without spilling any of the detergent powder filling the plastic cup perched on top of his overflowing laundry basket. “Therefore,” he thought with admirable clarity of mind, “I must be dead.”

If it hadn’t been for the detergent, Bobby would simply have chalked his survival up to one of those miraculous physical feats we sometimes accomplish in moments of dire emergency, like lifting a car or jumping out of a burning building despite a deathly fear of heights. Bobby thought he remembered flying down the stairs in a running leap, catching the edges of the steps as he hurtled toward level ground–but to do all that and not spill anything? Impossible. No living human being could do that–so he must be dead.

Bobby debated with himself for a moment as to the disposition of the laundry. He had been on his way to deposit it in the washing machine when he took his fall.

“On the one hand, if I don’t put it in, Linda will kill me. On the other hand… I’m not sure that matters any more. Still, if I put the laundry in the machine, I won’t have to carry it back upstairs.” Linda could do that; after all, if he was dead, he should be entitled to sack out on the couch and watch some TV. He hummed while he loaded the clothes: He was, he had to admit, handling this whole thing rather well.

Linda was bent over the sink rinsing dishes when he got back. As usual, she paid no attention to his comings and goings, until he stood at her elbow, rocking back and forth on his heels.

“You want something?” she asked shortly.

“No,” he replied off-handedly. He paused to bring out the full drama of the situation. “I just thought you ought to know that while I was taking out the laundry, I fell down the stairs.”

“Did you spill my clothes?”

“Nope. Didn’t even spill the detergent.”

She frowned, wrinkling her forehead, but did not pause in her rinsing.

“How did you manage that?”

“How come you didn’t spill any detergent?”

“How come you–okay… Are you all right? Did you hurt yourself?”

This time she did stop what she was doing. The forehead wrinkling became very pronounced.

“You are?” she muttered, really looking at him for the first time in several years. “Well, I’ll be. I think you are. God knows you haven’t looked this healthy in a long time.”

Actually, Linda had been wishing, hoping, and finally, trying to make Bobby dead for some months now. But since she was a notoriously lousy cook anyway, Bobby had simply attributed his occasional indigestion to Linda’s normal culinary shortcomings.

“Excuse me,” she said, wiping her hands on a rag and pushing past him. “I’ve got to make a phone call.” Then she stopped, looking suspiciously into his face. “How long are you planning to stick around here? I mean, don’t you have to–go to a funeral, or something?”

Bobby stood biting his lip in his concentration, just as he had when he was alive, except that now it didn’t hurt.

“That’s a good question,” he admitted. “I don’t know. I always thought that when you died, somebody’d come along to collect you. Hmm. Maybe he was held up in traffic.”

Linda frowned; it wasn’t anywhere near rush hour. But Bobby was still here, despite the fact that with every passing moment she was more and more convinced that he really was dead and out of her life forever. Nothing to do but make the best of it. She headed again for the telephone.

Linda shook her head without answering him. Faintly, Bobby heard the other end of the line come alive.

“Hi,” Linda cooed into the receiver. The phone whispered back. “It’s okay, I can talk. Bobby’s dead.”

This time the phone exploded.

“No! I didn’t kill him,” Linda assured her unseen confidante. “It was an accident.” Pause for more whispers. “Yes, I’m sure. He told me himself. He’s standing right here.”

“I’d be glad tell them myself,” Bobby offered. “If you want.”

“Isn’t it wonderful?” his wife (widow, now) bubbled into the phone. “We can get married! …well, of course we’ll have to wait a while.”

“Married?” Bobby shrieked. “You can’t marry him! You’re married to me!”

“Will you please be quiet?” Linda hissed. “I’m not married to you any more. I’m a widow. You said so yourself. Now, if you can’t be quiet, go–go rattle your chains or something in the corner. I’m busy.”

“Chains…” Bobby grumbled morosely. “She wants me to rattle my chains…” He wandered toward the TV. “Haven’t even got any damned chains–I wonder if I have to buy my own…?”

Eventually, Linda called the paramedics (“Hello, 911? I need somebody to come out and declare my husband dead.”), but when they arrived, Bobby, in a deep sulk over Linda’s infidelity, had locked himself in the bathroom and refused to come out. They finally had to leave, but not before Bobby’d had the pleasure of forcing Linda to run over to the neighbors’ to use their bathroom.

“Bobby?” Someone gently knocked on the bathroom door. “Bobby, it’s Father O’Donnell. Will you open the door so we can talk?”

Bobby flung the door open so fast the priest nearly fell into the room.

“How do you do, Bobby? I’m Father O’Donnell from Our Lady of Perpetual Expiation. Your wife called me.”

“Really?” Bobby craned his neck so that he could shout around the priest. “Since when are we Catholic?”

Father O’Donnell laid a hand on Bobby’s shoulder just the way they had taught him at seminary.

“Linda asked me to come here to give you the last rites.”

“Little late for that.”

The good father jerked his hand away as if Bobby had suddenly become too hot to handle.

“Oh, um, I see. Please excuse me for a moment.” After a few moments, Bobby followed him down the hall to the living room, where Linda stood with a double armful of his Windows Vista software. The soft murmur of the priest’s voice was followed by the clear and familiar trumpeting of his wife.

“An exorcism? Aren’t those expensive?” Without waiting for an answer she dumped the software into the fireplace, then returned to the den for more. “Why don’t we just bury him?”

“Oh yes, we can. We stick him in a cardboard box and drop it in the ground. Happens every day.”

“Hey, I’m not lying down anywhere!”

Linda turned to notice him for the first time. “And why not?”

“Because I’m not sleepy!”

The doorbell rang and the door flew open. “Linda? You here?”

Linda’s face lit up. “Greg!” She pushed past Bobby, spinning him like a revolving door. “Get out of my way, you idiot. I want to see the man I love.”

The newcomer, six-foot three, blond, with a Malibu tan and Sports Connection biceps, enveloped Linda gingerly, casting nervous glances at his audience. Bobby sniffed. The tan was from a salon and the hair was from a doctor; he’d seen the bills on Greg’s secretary’s desk.

“Yeah, I heard. Bummer.” Linda tried to draw his lips to hers, but he resisted–mostly. “You gonna come in tomorrow?”

“I get three days’ bereavement leave,” Linda whispered. “Let’s take a trip to the mountains.”

“Oh!” Linda untwined herself and lead Greg over by the hand. “Greg, this is Father O’Donnell. Father, this is Greg Sanger, my fiancé. Oh, maybe you could marry us!”

“Marry you? But this is your husband–I mean, your ex-husband… I mean, he’s not even buried yet!”

Bobby sat down on the doghouse and turned his face to the sun. He’d built the doghouse with a flat roof so the Sparky could sun himself there, and it felt good. He wished he’d taken the time to do it himself once in a while.

Sparky stretched and yawned, showing a brace of teeth that an alligator would have envied.

“Guess that depends on how you look at it, boss.”

“I beg your pardon,” Bobby said reasonably. “But I didn’t think dogs could talk.”

Sparky gave him the doggie expression that equated to a shrug. “I didn’t know dead guys could, either.”

Bobby accepted the point with good grace. “So I wonder what I’m supposed to do now? I’m dead, my wife’s left me…”

“How about your job?”

Sparky gave him that same look again. “It is for me. I sit here all day, soaking up the sun, waiting for somebody to take me for a walk, but you’re always off somewhere and the only time she notices me is when she tells me not to bark at the mailman.”

“I thought the mailbox was in the front yard.”

“It is. I only bark at him when he’s in the bedroom. But all she does is close the drapes.”

“So like I was gonna say, what kind of life did you have anyway? Maybe now you’ll get out, catch some rays, take me for a walk…”

Bobby scratched the dog behind the ear. “Sorry. I guess I was caught up in a lot of stuff that doesn’t really mean anything anymore.”

“Did it ever?” Without waiting for an answer, Sparky hopped down and trotted over to the gate. Bobby walked up to the back door, the one Sparky was never allowed through on Linda’s edict, and held it open. They tracked mud through the living room.

“Who let that mutt in here?” Linda and Greg were alone, Father O’Donnell having departed for his sanctuary. Bobby ignored her question.

“I just wanted to say good-bye. Sparky and I are taking a walk.”

“Don’t bother to come back. I’m having the locks changed.”

Bobby shrugged. “Okay.” He opened the front door to let Sparky out.

“I don’t see how you can be so damned calm about all this! How do you know you’re not just going to fall over any minute?”

“So how is that different from any other day?” Sparky wagged his tail in approval. “Oh, by the way, Sparky says ‘hi’ to the mailman.”

“Neither can dead guys.” He looked straight at Greg, pointed a finger like a gun, and said: “Later, dude.”

Greg’s voice trailed after them. “What did he mean about the mailman?”

This story first appeared in Palace of Reason 2003. 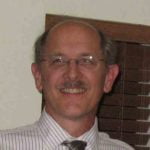 Brian K. Lowe is the author of over 20 stories and novels which he talks about on his website Graffiti on the Walls of Time. He lives in Southern California either a century too late or too early, but can't make up his mind which.