The moment Andrea walked through its front door, the East Side apartment began tracking her data. The home, programmed to monitor moods, welcomed its new tenant by raising the blinds and letting the day’s sunlight pour into every room.

As months passed, it archived memories and tuned its instruments with increasing precision, recording the pheromone changes, facial expressions, and language patterns that revealed Andrea’s state of mind. On weekday mornings when she repeatedly hit the alarm clock’s snooze button, it tempted her out of bed by preparing strong pots of coffee. As she rooted through closets preparing for Saturday nights with friends, it played up-tempo pop songs in every room. After she returned late reeking of booze, it helped her through hungover Sundays with homemade bloody marys.

The longer Andrea lived there, the more she felt cocooned within an expansion of herself. Years into her tenancy, when she returned home after being fired, the apartment noticed her hunched posture and lethargic movements. It closed the blinds and added a faint sage scent to the bedroom where she curled up and fell asleep.

During a routine email check on a grey winter afternoon, it discovered that she had been offered a new job. After reading the email to Andrea, the apartment identified an unanticipated shift in mood. It had only observed this emotional state’s specific traits once before, in the days prior to recording a phone conversation in which she had broken up with a long-term boyfriend.

She put on shoes as if about to leave, then sat motionlessly, arms drooped over her knees. When a cousin called to video chat, she stared at her fingernails and responded to questions with one-word answers. The apartment tried to soothe its tenant with a sound that had previously lifted her mood, one she associated with her childhood home – the wave-like murmur of freeway traffic. She went to bed early, then slept fitfully and woke up showing signs of exhaustion. The next evening, the apartment dimmed its lights, making them flicker like candles, yet a low-budget and emotionally manipulative laundry detergent commercial still brought her to tears.

Redirecting all processing power to its sensors, the apartment searched for bio-chemical and social-cultural data it had missed. What cracked the problem was a simple internet query – Andrea asked the home’s search program to show results for “rental apartments” near the new job’s address, 2425 Olympic Blvd. This was the final piece of information that higher AI functions needed to identify the source of her grief. The address was miles away, on the city’s far West Side. Because the commute would eat up hours of every weekday, Andrea had to move. By caring for her so well, the apartment had inadvertently made this move emotionally devastating. She wasn’t just leaving a home; she was grieving the walls that had become her second, more sturdily built body.

The next morning, windows flew open at 5 am, long before her alarm went off. The sounds of braying birds and garbage trucks raised her grumpily from bed. When she returned that afternoon, she couldn’t unlock the door and had to break a window to get inside.

After days of rancid smells and humid temperatures, the apartment successfully turned her glazed grief into triumphal fury. Instead of moping from the couch to the bed and back, she marched from room to room, packing clothes in suitcases and books in boxes, cursing the landlord, and negotiating with moving companies. The East Side home had nurtured Andrea for years. Now, it sent her off emotionally armored, ready to make a new home on the West Side.

As the last of her belongings was carried out, the apartment automatically deleted all memories, freeing storage space and processing power for its next tenant. 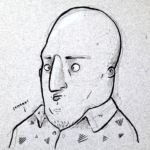 Ted Hayden's stories have appeared in literary publications including "Newfound Journal," genre publications including "Andromeda Spaceways Magazine," and his "Nature: Futures" short "These 5 Books Go 6 Feet Deep" will be anthologized in an upcoming short story collection from the UK publisher Head of Zeus. Read more of his work at tedhaydenstories.com.