When she first learned to weave, when she became an apprentice to the loom, she discarded more threads than she selected for a project, fussed over every variation in shade and hue.

A mentor would ask, “Why did you pull out that thread?”

“Because it doesn’t match,” she would say.

“And why did you select that thread?”

“Because it does match,” she would say.

It took a long time to learn that not everything needed to match. She struggled with her instructors and with herself. Her technique was without flaw, her artistry was not.

But daydreams are wanderings, and sometimes the palette wanders, too. She still prefers pastels and muted tones but has come to understand the value of a sudden shaft of bright sunshine amidst the earthen tones of bronze and copper, or the way the eye can come to rest on deep, rich teal water after flying through cloud-soft blue. There is no need for jarring notes or broad strokes or the bold colors of a nightmare, but a hint of something grandly unexpected is always welcome.

It is not just color but also texture – life’s journey is not always smooth as silk. Each warp end is carefully chosen to enhance the finished drape of the cloth, the occasional slubs and knots contrasting with gossamer wings.

She fans the ends out across the loom’s front beam, being careful to maintain their order. She passes an individual strand through reeds, heddles, harnesses – again and again until every thread is in place. She lifts each harness one by one, stepping on the pedal-like treadles under the loom to ensure that every thread is carried aloft when it is their turn to add to the pattern of the weave.

She re-ties the harnesses to the treadles in various combinations. She sets the pattern there and can lift one, three, as many harnesses as are needed with one press of her foot, a chord played with wood and fiber. She winds the long threads through the loom, straight and taut.

It takes as much time as it takes. Sometimes the loom can be dressed in no time at all. Other times it seems to take a lifetime. She doesn’t mind. She loves the progression of steps. Loves checking the tension of each thread, keeping a practiced eye on the back beam to ensure threads don’t cross or wind into each other.

Throughout the process, she considers the future of the cloth, of the soul who will be warmed by it. She doesn’t pray over it as some do. That would be imposing her hopes and dreams into the work. It isn’t her place. It is for the recipient to give it meaning, not her.

Now that the loom is dressed – she once considered dressing a loom an odd phrase to use, but now she enjoys the image it brings to mind – she winds thread onto a shuttle which will feed the weft through the maze of raised and lowered warp threads. The choice of weft is an important one, for it provides structure to the entire cloth. It must balance the weight and substance of the warp, provide context to the design.

Weaving is an intentional act of meditation; her first mentor explained. One pushes down the treadles, lifts up the harnesses, lets fly the shuttle, swings the beater forward, slowly reveals the pattern which will span the entire cloth. A rhythm is sung with each throw of the shuttle, until the weaver is part of the whole.

Treadles down, harnesses up, shuttle across, beater over, another thread is pushed into place. She dances on the treadles, plays the music of the loom and listens to the chiming of the heddles, the percussive thump of the harnesses when they drop down in the shaft, the whisper of strands as they slip over and under each other.

Sometimes a thread breaks. Sometimes one is caught up or down when it should have been the other way, but she has also learned to let that happen.

It is the hardest lesson for her to master. She still wants to be perfect. She wants her cloth to be perfect, but threads break and tangle for a reason, and it is not for her to repair them.

She continues to weave, advances the warp, winds the finished yardage onto the beam in front of her. When there is no more to weave, she starts at the back of the loom, cuts and pulls the remaining thread through to the front, one bundle at a time. She knots and twists the fringe.

She stands, stretches, casts her gaze across the vast endless studio filled with other weavers. Most of their looms are dressed in bright, jewel-toned colors. The resulting weaves are wild, extravagant, and discordant in turn. She thinks them beautiful, but she does not envy those who weave such cloth.

No one inspects her work. No one needs to, for though she is not perfect, she is the best among them. Memories of her life before she took up dancing on the loom have long since faded just as color fades in the sun. Any loves previously held by her heart have faded as well: her devotion to the loom is now boundless, and she can design the cloth of dreams like no other.

It’s easy to weave a nightmare. To be a weaver of daydreams, well, that is the challenge. 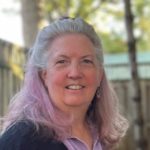 Patricia Miller is a US Navy veteran, sixth of ten kids, born and raised in Cincinnati, Ohio, and currently living in Wisconsin, Land of Cheese. She holds a BS in Education an MS in Library Science. Patricia started reading at 3 1/2 after becoming obsessed with Batman. She is a weaver, quilter, raiser of roses, maker who is hooked on QI, British murder villages and professional cycling. Patricia is on the spectrum and considers that as an asset to her writing. Patricia writes in many genres: science fiction, fantasy, horror, and romance and is currently in the query trenches with a middle grade ghost story. Publications include short fiction in numerous anthologies, Wyngraf, and Cinnabar Moth Literary Collection. Upcoming publications include short stories for Zooscape Magazine, Dastardly Damsels, and TouchPoint Press. She is a member of SFWA (Assoc.), CODEX, and a participant in FutureScapes 2022. A complete listing of Patricia's stories, occasional blog, and more info about her can be found on her website at: https://trishmillerwrites.com or on Twitter at @MillerTrish42