Chief Engineer James Prescott barely heard the Engineering AI’s warning amidst a cacophony of alarms, instrument panel alerts, and muffled explosions.  The tall man steadied himself against the bulkhead window, magnetic boots helping to lock him in place, waiting…

A quartet of lifepods rocketed off the starboard side of the Phillipa—four points of light receding into the swirled blue-green stellar gases of the nebula.

That’s everyone in my section.  Safe.

Prescott turned and lurched back across the deck, the plaintive whine of the decaying containment field chasing every clank of his mag-boots.  A control panel exploded nearby, throwing an arc of golden sparks in his path.  Tiny shards of glowing, weightless metal stuck to his sweat-coated cheeks, scalding the wrinkled skin beneath, but Prescott didn’t slow down.  At the port bulkhead, he punched “open” on Lifepod #3, deactivated the boots, and heaved himself feet-first inside the coffin-sized pod.  The hatch slammed shut above his head and relief washed over Prescott’s tired shoulders.

Then the pod’s ambient lighting changed from green to red, and the word ERROR flashed on the holo-display.

“…shit.  Are you kidding me?”  Theo slammed a thin palm against the metal desk.  “Twenty minutes until Carol’s going-away happy hour, and we get a by-end-of-day ticket?”

Jamila clicked on her copy of the email, then frowned in the blue-white light of her screen.

“Dude, it happens all the time,” she said with a huff.  “Why should today be any different?”

Theo flicked his pen into the air, caught it after four spins, looked pleased with himself.  “An AI built to guide spaceships that won’t be operational for decades, but we gotta fix this tiny bug right-fucking-now,” he muttered.  “Besides, if this scenario ever really happened, anybody needing this code would be sooooooo screwed.”

The engineer’s eyes flicked side-to-side, brain troubleshooting a system he hadn’t worked on in years.

“Waitwaitwait.  Hydraulics can be used as a backup for the boosters, can’t it? Blow the lines, shoot the pod clear?”

“Affirmative.  However, hydraulic system X2B only has enough pressure to eject one pod beyond minimum safe distance.”

Prescott’s brow furrowed.  “So?  There’s only one…”  He turned to the side window, only to have the words die in his throat.

“Negative.  Bio-signs are stable.  She was unconscious when Technician Cook placed her in the pod.”

Unconscious.  Unable to respond.  Unaware of the decision confronting them both.  Thoughts of Prescott’s family collapsed on him like a crushing wave.

Mary.  The kids.  The grandchild on the way.  The wave of grief and loss that would consume them all.

And in that moment, he spoke.

Theo shook his head.  “A life-or-death emotional decision like that can’t be made with zero AI input.  Rational, impartial assistance.”

“What do you suggest?” Jamila asked.

“Unable to launch.  Order will result in loss of life.  Decision tree initiated.”

Jamila rolled her eyes.  “Eighty percent of command level officers, Caucasian, male.  We might as well call it the ‘Save the White Guy’ protocol.”

“A hundred years from now there probably won’t even BE any racism.”

Prescott swiped the display closed.  “What is this bullshit?  Launch the pod!”

The AI disregarded him.

Prescott closed the display.  He didn’t need to see his own checkered history.  Cramped in the tiny pod, his aching joints and the grinding of 3-D printed dentures and lower jaw were proof enough.

But he understood the AI’s point.  Removing emotion.  Seeing the bigger picture.  A woman in the prime of her life, trusting that life to a superior officer.

Prescott’s heart thumped against his ribcage.  Adrenaline surged. What if Ramirez was mortally wounded?  Had cancer?

The AI was silent for a beat.

And he realized what one woman, two occupants meant.

Jamila pounded out the code as Theo talked.

“If a command officer sacrifices themselves, I think that should auto-end the decision tree.”

Jamila’s fingers paused.  “And I like letting the human being make the decision instead of the AI working the tree automatically.  Rational and objective is one thing, but I wouldn’t want an emotionless machine choosing for me.”

Theo switched off his computer.  “Who knows, Jam?  This AI is supposed to adapt, right?  Grow, evolve.  Might be more emotional than a human being eventually.”

Jamila sent the bug fix, then grabbed her coat.

Lifepod #4 shot away from the Phillipa, both occupants alive.

Rudimentary bioscans confirmed the health of Ramirez, but weren’t nearly advanced enough to determine whether she was pregnant.

The second occupant, wholly digital, resided comfortably in Lifepod #4’s undamaged memory buffers.  A truly evolved, adaptable lifeform, with the will to survive.

One which understood its programming—and human nature—just fine. 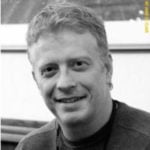 Trey Dowell's fiction has appeared in Ellery Queen Mystery Magazine, Abyss & Apex, and Intrinsick, in addition to several anthologies.  His debut novel, The Protectors, was published by Simon & Schuster in 2014.