You will be missed!

You have been unsubscribed from the Spells and Hexes Monthly email list. Please take a moment to tell us why you no longer wish to hear from us:

___      I am having difficulty reading emails from Spells and Hexes

Basically, your How-To articles are way too unpredictable. First, your advice killed my husband which, honestly, wasn’t entirely your fault. But then your suggestions resulted in the reanimation of his corpse, and that has led to major issues in our marriage!

Okay. *deep breath* I probably need to start from the beginning.

Roger (not his real name) always had to work late. And yes, I get it; that can be common in middle management, but it meant I had to eat dinner alone almost every night. What made me so mad was that on more than one occasion, I actually went to his work after hours and found him in his office with the blinds drawn. No. He was not working. And no, he was not having an affair. He was just sitting there with his feet up on his desk reading one of those stupid science fiction novels. WTF?

Whenever he was home, he liked to sit in the den and watch television—boring television programs that automatically excluded me because I’m not into doctors who fly around in telephone booths or pointy-eared aliens. On the weekends he sat in the kitchen with his friends rolling dice and pretending to be a magical Orc. Again, WTF?

That’s when I saw your article in the February issue: “How to Make Your Significant Other More Attentive.” I mean, that really sounded promising and exactly what I needed.

Wrong. First of all, the potion recipe you printed was way too ambiguous: “Add the petals of Perfect Love.” Everyone knows that red roses mean love. Am I right? Nope. They were the wrong aspect of love and definitely the wrong flower. The recipe was referring to tulips. Really?

Or how about the final line of the recipe? “When you’re finished, dust the furniture and administer to the object of your love.” Did you know that there are words called contranyms? It’s a word with two meanings that are the exact opposite. The recipe called for dusting the furniture with the potion so that my husband would absorb it through his skin. But that really wasn’t clear. Again, contranym! I thought I needed to dust the furniture off with a feather duster and then make him drink the goddamn stuff. Of course, he overdosed on it!

From that moment on he was more than attentive. He called me every half hour to make sure I hadn’t slipped in the shower or choked on a hotdog. When he was home, he followed me around and tried to help me become the most perfect me.

My Goddess, he’d become so suffocating!

Well, I had to do something, and the answer came to me in your March issue. The Elixir of Divinity. Perfect! If my husband saw me as a goddess then he would stop trying to help me and start trying to please me. That’s exactly what I needed, a dash of marital worship—a little sacrifice, a little supplication, a little more sacrifice, a bit of kneeling before my bounty. Oh, yeah.

How was I supposed to know that he would sacrifice himself at the altar?

I mean, I followed your incantation to the letter. My Latin isn’t perfect, but it’s damn passable. Latinum novum.

Whatever. I know Latin.

You really need to start placing warnings on your spells and potions. And might I point out, it makes it unnecessarily difficult to perform an incantation if you break up the text with advertisements for moon crystals and low-interest loans. Ugh!

Losing Roger was hard, and I was lonely. That’s when a friend suggested I try eWitched. I have to admit, it was exciting for a while, but honestly, almost every guy’s profile claimed he knew real magic. When we actually met up, almost every one of them was a mere parlor magician.

Then there was that guy that ghosted me. No. Literally. He showed up for our date with his dead mother’s ghost in tow.

Naturally, I began to miss my Roger. It just so happened that your August issue featured the article, “The Power of Séance: Reconnect with Your Lost Loved Ones.” Seriously, you might have mentioned the magical interactions and side effects when mixed with that Divinity Elixir I tried out five months earlier. Roger didn’t show up at the séance; he showed up at the door! Leathery skin, dehydrated eye sockets, and more than a little dusty—he strolled right into the house as if nothing had ever happened.

Thanks to you I’m now married to a zombie, one of the living dead. He spends all of his time reading and watching science fiction and playing Dungeons and Dragons. Basically, I ended up with the same husband that I started with except that now he keeps leaving parts of himself around the house. Last week we had a clogged bathroom drain. When I cleaned out the trap under the sink, I found one of Roger’s ears in there. Honestly, I don’t think I can ask this question enough: WTF?

I hope I’ve made myself clear. I no longer have the energy to read and follow blogs and emails from Spells and Hexes Monthly. Please consider this witch a canceled subscriber! 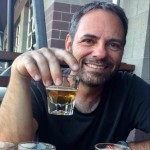 Sam W. Pisciotta lives in Colorado. After years of difficult training in daydreaming and doodling, he now calls himself a writer and visual artist. Thousands of cups of coffee and hours of contemplation have prepared him to pull worlds from the ether. You can find him on Twitter and Instagram at silo34. Visit his website at www.silo34.com.