There’s something I never told you, but I think you’re old enough now to know. I have a magic inside me. It lives between the lines in my fingertips. Inside the swoops and swirls you have to squint close to see, arcing like tiny rainbows of refracted light.

I was about your age when I found it. A day when the world seemed too big and I was too small and all the shouting and the chaos buzzed through the walls like an alarm clock telling me to leave. I climbed under the desk in my cramped room, tucking boney knees into my chest, and tried to fold myself smaller and smaller, hoping I eventually disappeared. That’s when I looked up at the woodgrain above me—round knots watching me through crosscut eyes, telling me I’m not as alone as I seem. I ran my fingers across the course surface, and that’s when I saw a flash of light from my hands.

Round shapes turned to buttons, blinking red, daring me to press them. The cheap wood around me became cold steel, complete with rivets and dials and gauges and a porthole window to see the world outside.

I pushed the big red button, and engines rumbled beneath me. Smoke clouded the window and I was thrust back into my seat. The world I knew drifted away. Suddenly I was weightless, staring down at a place so small it couldn’t possibly hurt me. No more shouting late at night. No more bouncing from Mom’s house to Dad’s and back again. No more people so wrapped up in their own suffering that they forget to notice mine.

In my rocket ship, I was free.

When I was ready, I gripped hold of the flight stick, toggled the thrusters, and turned my ship back home. The shell trembled around me and the air grew hot. I fell back to the planet, drawing closer to a ground that charged toward me, and just when I thought I would burst into flames, the shuttle slowed, and I touched down ever so gently in my cramped room once more. The controls turned back into wood and I crawled back into reality.

I did it often after that. Times when I felt alone on the playground or when fists flew like comets, threatening to collide into me once again. Each time I would find a dark space all to myself and, no matter the size or shape, it would transform beneath my fingers in a kaleidoscope of light.

And with the single push of a button, I could fly.

I visited moons and planets. Battled aliens alongside robots. I even made friends with the stars, and they knew me by name. Yet each time I returned, and the world somehow felt a little less frightening than before.

When I grew older, I forgot about that magic inside me—adults do that, it seems—until one day when I found another like me. An astronaut who brought back that magic, and we wrapped around one another like swirling galaxies until you burst into our lives with all the fire and fury of a supernova.

Now, I want to share the magic with you.

If the world feels too big and you feel too small, we’ll find a place together where we will tuck our knees to our chest and let our hands glow. You can push the big red button and together we’ll fly far, far away until problems are so small they can’t hurt us. And when you’re ready, we’ll steer the ship back home, and each time we do, the world will feel a little less frightening than before, because there’s a galaxy of stars that know you by name. 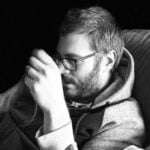 Matt Bliss is a construction worker turned speculative fiction writer from Las Vegas, Nevada. He believes there's no such thing as too much coffee and is the proud owner of way too many pets. His short fiction has appeared in Cosmic Horror Monthly, Hyphenpunk, and Scare Street's Night Terrors among other published and forthcoming works. If you don’t find him haunting the used book aisle of your local thrift store, you can always find him on Twitter at @MattJBliss.