It’s never a good thing to wake up and find yourself covered in marigolds.

It means you aren’t really awake and aren’t going to wake up ever again. This is because marigolds are flowers of death and remembrance. There’s a golden sadness to the blooms, both bright and dark. Insects don’t like them, neither do rabbits, or deer. Perhaps it’s the scent of sorrow that drives them away, possibly the yellow petals exude too much unhappiness.

Many think of insects as hard bodied, but beneath their skeletons they are as tender as memories. And everyone knows that deer and rabbits, prey to almost anything with claws or guns, can sense sorrow from miles away.

Thus, when Maria awoke sticky with petals, even though she was in the cold, alpine mountains of Utah as far as she could be from the dry deserts and cobbled streets of her homeland, she knew she was dead. She could smell it was October thirty-first, the night that spirits rise and travel homeward.

It’s the time when fall and winter tango, circling round each other in a dance of fallen leaves. It’s the time when the world of soul and body are so close their fingertips brush – though why specters should care about dates is a mystery. Generally speaking, dates are human things. Clocks, watches, calendars and appointment books, all kept to fool ourselves into thinking that time matters. The dead should have no such illusions. The dead have all the time in the world.

Nonetheless, something in the air on October thirty-first calls to them, telling them to wake.

So, after Maria had rubbed the petals from her eyes and spit the bitter green stems from her mouth, she knew she had to travel back the way she had come.

She had gone as far from home as she could, up to snow-crusted mountains where the air was so clear and thin it hurt just to take a deep breathe, up so high and cold the skin would peel off your feet like grapes.

She had moved to a town as clean and characterless as a dollhouse and had wanted it so. She gloried in the way even the wildflowers seemed more orderly and tended than the wild gardens back home. But now that Maria had woken, she desired nothing more than to be back in those ancient, uneven streets. She wanted to have to look where she was going, so she would not fall in the holes left by careless workmen or untended trees. She craved being nuzzled by mangy, stray dogs. She coveted the noise of laughing children, the jingle of old men selling fruit and the cries of hoary crones hawking tamales. She missed the smell of grease, hot oil, refuse and even burning plastic. She required all that color and life that she had fled.

It was a long journey, far too long for one night, at least for the living, but the dead travel outside of time. Distance does not matter when each footstep is a memory. Up and down the long, winding roads from Utah, through Nevada, and Arizona, to California and Mexico, she plodded, leaving traces of orange petals along the way.

Some took seed and became flowers. Others took flight and became butterflies. That is why many people consider that butterflies are the souls of the dead.

With every step, Maria’s memories fell away. So that by the time she reached her doorstep to kiss away the tears of her grieving mother, she was a little child again, blameless and without fear. The dead are all like that, like children, it is our memories that make them so.

The next year, when the hills from Utah to Mexico were dotted with golden flowers and monarchs migrated south along unfamiliar routes, everyone wondered why. Some blamed climate change, others accused foreign travelers of scattering strange seeds and releasing alien Lepidoptera, everyone but Maria’s mother.

She knew the truth. She knew that every time a dead child returns home they bring a little light and color back to the world that they are missing and leave it there for those who remember them. 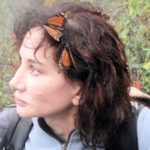