When you take the job, they say it’s easier to do things that terrify you when you know you aren’t going to remember them. I haven’t found this to be true. My receipts show that I’ve jumped out of an airplane sixty-seven times. I’ve left the atmosphere and felt the weightless lift of space four times. I’ve been in six professional mixed-martial-arts fights. I’ve screamed at fourteen strangers who smelled bad in public and I’ve undergone dental surgery once (You get weird clients in a field like this). But I don’t remember any of these moments, and knowing I won’t remember this one doesn’t help.

How does someone get into the experience resale business? Well, it’s easy: spend your teenage years training to be a professional fighter, get a little bit of brain damage and pass most of your classes with C’s. Forgo community college for a chance at greatness. Discover you are a middling, maybe lower-middling fighter, with decent instincts, mediocre genetics, who can make maybe $1,000 a month on the regional circuit but will never pop. Realize you can’t even afford the membership and training fees at your fighting gym. Pass a flier on the street. Call the number. Here you can get paid to do incredible things like sky-dive and kiss strangers. And sign on the dotted line. Simple, right?

How’s it work? Look, the people who do this for a living tend not to understand the complex science behind it, but here’s how it was explained to me. Experience is kind of like light, it is both a wave and a particle (pretend you knew that’s what light was and nod knowingly). Once you figure that experience exists as a physical substance, the rest is just technique and technology, like learning where someone’s joints don’t want to bend and learning how to isolate them in jiu-jitsu. The transfer is a more complicated procedure, but lab-grown memories don’t contain the same, and these were their words, “embodied weight” as organic Memory Molecules™, so they hire people like me to experience things people want the memories of but lack the time or courage to actually do. That’s what I can give you, contact the research division if you want to know more.

Though taking outside clients isn’t a breach of contract, it’s not exactly recommended either. Usually, because you can find yourself in situations like this: holding a defibrillator to your chest, waiting for the charge light to come on, so some eccentric billionaire can experience what it’s like to die (they’ll revive you, probably, so don’t worry). I signed an NDA, but in about 45 seconds, when I come back, and they strap me in, I won’t have any memory to disclose. There’ll be a six-figure chunk of cash in my bank account, and I’ll connect the dots. But just because I’m not going to remember it doesn’t make dying any easier.

The light is on. I’m supposed to lower the metal to my chest and press the buttons and my heart will stop for forty-five seconds, the limit I can take without brain damage. They’ve given me top-shelf nootropics that aid in memory retention and will help extend the time my brain can go dark and still come back, so the transfer comes in clear. Turns out top-shelf nootropics can also cause severe anxiety. I might not need the defibrillators; my chest feels like it’s going to cave in on itself.

The metal is cool against my skin. I notice how badly I’m shaking. In a few minutes, all the lights will go out and I will, for a little bit, know exactly what it’s like to die. My fingers hover over the buttons. After minutes, I press down and hear it. I swear to God, I hear the electricity, and then it’s ———-.

I’m in California, shadow boxing between sets at the Venice Beach outdoor gym. I don’t know what I did for the $600,000 I woke up to in my bank account one morning, but I’m glad I did it, unless it’s something awful, in which case I guess I’m glad I forgot it.

I don’t know what I’m doing next. I’ll probably never fight in a cage for a living, but the older I get, the more that seems like a good thing.

An old man approaches me. He looks tired, exhausted really, and his suit is expensive, but he’s sweat through it, and his white button-up shirt has a yellow tint around the collar.

“Nothing happened! There was nothing at all. Nothing! Empty! It was terrible,” he shouts as he grabs me by the shoulders.

He’s easy enough to push away so I did. I took off in a little jog once he started following me. He looks vaguely familiar, but I don’t know him. Whoever he is, I hope he finds what he’s looking for. Maybe he can sell whatever’s haunting him. I hear there’s good money in that–not that I need it. 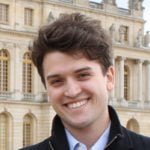 Spencer Nitkey is a writer, researcher, and weirdo living in New Jersey. His writing has appeared, or is forthcoming, in Fusion Fragment, Metaphorosis, Corvid Queen, Write Ahead/The Future Looms, and others.