It was during those months of strangling, watery heat when Lizzie Williams first told us about the head. She kept it in a burlap sack and would walk everywhere with it slung over her shoulder. When she grew tired, she let it bump along behind her in the rusty dirt. It don’t mind, she told us. It’s just a head.

A penny would get you a peek. A nickel a good look, just long enough to squint at the shadowed features. Some saw a freckly boy. Others a wrinkly old woman. Junie Lee said it was nothing but a dirty skull, but she was dirty herself and nobody paid her any mind. Ida Wallace shouted, It’s smiling at me, then Lizzie Williams snapped the sack shut and said the good look was over, even though it hadn’t been five mississippis and she knew it.

A dime, she said, and it’ll answer a question.

Any question? I asked and fished out the coin I’d snuck from my mama’s bingo jar.

Anything, Lizzie lisped through snaggled teeth, but there, in the fading light behind the school, all I could think to ask was where it came from. Then the sack’s shadowy folds stirred, and a croaking voice said, The swamp.

Dawn Macy said I was stupid to ask such a dumb question. Where else would swampy Lizzie Williams get such a thing? Lizzie, who brought baby gators to school. Lizzie, whose hair smelled like spoiled turtle eggs. Lizzie, who now skipped off to the snake-ridden hollow where she and her pappy lived, her pockets jingle jangling with coins. She hummed a song as she went, an I-got-all-your-money tune.

The next day, she met us beneath the monkey bars with an icy Coca-Cola in one hand and the sack dragging behind her. The sun glowered overhead as she slurped her soda through a paper straw. Don’t be sore, she told us then said the head could tell us secrets, as long as we told it one first. She set up a confessional in the janitor’s tin-roofed shed, beneath strange silhouettes of shovels and rakes and claw-like shears. We lined up outside and wondered what kind of secret Fannie Miller must be spilling to be taking so long; we laughed when Sue-Ann Phelps came out all quick and blushing; we grew quiet when Junie Lee emerged, her shoulders drooping more than usual. When it was my turn, the head’s sooty eyes bore into me until I blurted out my darkest secret, forgetting to be quiet, forgetting that Lizzie was right there, her smile stretching wider and wider like a frog. The head whispered its own secret back, its voice harsh as lye, its breath like rotting peat.

We didn’t share the secrets the head told us but eyed one another crookedly beneath the day’s heavy heat. Finally, Lizzie Williams came out saying it sure was hot and she could do with another Coke. Then she skipped along, the sack bouncing over her shoulder. Through a tear in the sack, the head stared at us. Some of us said it winked.

I hate that head, Dawn Macy said, though we knew she didn’t mean it. The first thunder of the day rolled across us, and we watched clouds billow up and waited for the sky to darken, waited for Lizzie Williams to come past with another Coke. She had all our soda money and all our secrets and we had nothing. One of us, and we can’t agree on who, said we should get a head of our own.

So that’s how we came to follow Lizzie Williams to her and her pappy’s place. We carried shovels and spades for digging, hatchets and sling blades for cutting through thickets of palmettos. It was growing dark beneath the live oaks’ black, oily leaves, and soon the rain would pelt us hard.

Lizzie lived in a small, squat shack that leaned to one side, its front porch half fell-off already. She was inside, lighting a lantern; in the dark of the shack, her head bobbed about from window to window. There was no sign of her pappy. The yard was weeds and sand, and our tools were sharp; soon we’d dug head-sized holes all across it, sometimes crying out when we thought we hit something. We must’ve carried on like that for about an hour as the sky grew tighter about us, until Lizzie Williams sauntered onto her porch and demanded to know what all the commotion was. She cradled the head in her arm like a baby. It was even uglier out of the sack. It grinned as she spoke.

Get on out of here. My pappy will have a fit if he sees y’all messing up our yard.

We want ourselves a head, Lizzie Williams, we said.

There’s just the one, and it’s mine. Lizzie hopped down from her porch and told us all to scram. Heat lightning rippled across the clouds and a flurry of nightjars took flight.

We told her we knew there was another head, and we aimed to dig it up, and she better tell us where it was.

There aint no more heads, she said, and the wicked thing in her arm wheezed out a laugh like the sawing of cattails.

We called her a liar. Said there had to be another one. Ask the head, we cried, and she did, while we leaned on our shovels and sharp spades and waited for the head to answer in its raspy, smoky voice:

And it laughed. And we looked round. And thunder split the sky. And Lizzie Williams looked at us and our tools with her round, round eyes in her round, round face. And she said, What y’all staring at? And the head laughed some more. And the rain, it finally let go. 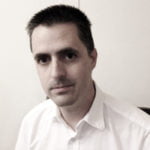 Joshua Jones Lofflin’s writing has appeared in The Best Microfictions 2020, The Best Small Fictions 2019, The Cincinnati Review, CRAFT, Paper Darts, SmokeLong Quarterly, Split Lip Magazine, and elsewhere. He lives in Maryland. Find him on Twitter at @jnjoneswriter or visit his website at JJLofflin.com.