Rosie O’Connell smelled only dust where once there had been life.

She had worked this diner for forty years. Forty years. Nearly two thirds of her life behind the counter or in the office through the back, she had seen staff come and go beyond all recollection, served an ocean of coffee, more waffles than would pave Hollywood Boulevard, and been called an icon of the century. But the two-lane highway had one day become four, then six, and every other local trader had moved, or been redeveloped, as the passing trade kept right on passing. It was only ever a matter of time before the march of progress came for Rosie’s old place, and her loyal clientele had flocked for one last meal before the dozers arrived.

Cars had been gas-guzzlers when she took the diner, now they whirred by with electric quiet; there had been a pay-phone once. The new century made its agonizing way into tomorrow, and the city at last found a use for her island of land by the freeway. Not a factory or depot, just a pylon. They needed it to plant a gigantic tower in support of a turnpike that would pass right overhead and curve off between brand new skyscrapers.

The good news was they paid handsomely for the compulsory purchase.

Rosie heaved a sigh. She stood in the stripped diner, looking around with eyes red from too many tears. A life spent here, just to be ripped away…. The wreckers were ready to move in, a city agent was waiting for her, just letting her have the few minutes she needed. Robots had been in already, recovered fixtures and furnishings, decorations, they were all gone. Only the bare shell of the building remained, nothing to weep over.

She saw her reflection in glass, a tired woman, hair colored over gray, not yet stooped with age but fearing the coming of that phase of deterioration. Her bags were around her feet, a jacket over her arm, and she knew she was delaying the inevitable. She sighed once more, went to lay a hand flat to a wall, and speak from her heart to the old place.

Goodbye, old thing, she said silently, it’s been a grand time we’ve had, you and I. But powers greater than us have decided it’s over, and I can’t take you with me. Time has passed us by, and we’re both at the end of our road. She kissed her palm, lay it on the wall one last moment, then collected her bags and stepped out, to close the door for the very last time.

The city agent, Manning, was waiting, papers under her arm, and in the vacant parking lot a fierce array of robotized equipment had been unloaded from trucks. Diggers and dozers, compressors and generators…. Supervisors in hard hats stood around in the morning heat, ironically drinking coffee from a catering van, when on any other day it would have been hers. Manning approached, fanned herself with the papers, and raised sculptured brows. “Are we….ready, Ms. O’Donnell?”

“Perfectly,” Rosie replied smoothly, feeling empty inside. “Give me a few moments to leave, I ordered a cab. I don’t want to see it come down.”

“I understand.” Perhaps the young bureaucrat did not like being kept waiting in the early glare; perhaps she was not even young, it was so hard to tell these days; and therein lay the secret, the one ray of sunshine that gave Rosie a smile—a secretive one, growing, ever so faintly, behind the pathos of the moment. “Retirement, is it?” Manning probably thought she was being kind, finding conversation with the old woman. “I trust the settlement is absolutely acceptable?”

Now Rosie managed a smile, a mysterious chuckle in her throat. “Yes, the figure is very nice indeed. But no, I’ll not be retiring. I have far too much to do.”

“Plans for the future?” The question was a courtesy, the agent had no interest in anything other than getting the dilapidated eyesore down as quickly as possible.

“You might say.” Rosie reached into her purse and drew out an advertising slip. She passed it over and Manning read softly.

“Opening soon, on Route 14 north of Mojave, ‘Rosie’s Recharge, the oasis in the heart of the desert!’ Use our quality restaurant, shopping mall and cinema complex while your vehicle recharges from the sun at our complimentary sockets—free for all and free forever!” Manning glanced over the slip and found Rosie smiling as if a vast secret had just broken.

“You’re the first to know, my dear. The march of progress waits for none and it’s time to upgrade. You build a nice bridge here, I’m off to the Sierras.”

An air cab whispered down on quad rotors, to land in the vacant drive-through area; the pilot sent the gullwing up and stepped out to take her bags. “Where to, lady?”

Rosie threw the agent a smile as she crossed to the car and slid in. “‘Flower of the Desert Rejuvenation Clinic,’ please. As fast as this thing will go.”

All bravado aside, she found one last tear as she watched the old place dwindle below, the cab rising between the towers of the new age before turning east for the wide, hot wastes, and she settled herself for the first leg of a whole new journey. About the time she emerged from AgeAway™ therapy a 68-year old sexpot, the new complex would be nearing completion, and she could hardly wait to open her doors.

She resisted the temptation to glance back. Tired as the diner had been, she could not stand to see the wreckers go to work, and could only lament that the strange progress of this twenty-first century swept away the old with such scant mercy.

Well, tomorrow was a new day, and she would grieve for the old when she was no longer part of that definition. 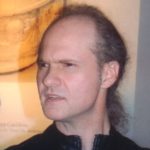