Professor Hypsibius followed the closing remarks of the Tardigrade Science Council annual meeting with waning enthusiasm. The conference drew to a close, once again without significant progress on the matter that had occupied his entire life’s research. He was getting on, his tenth moult just around the corner and with that the prospect of leaving his career without a lasting legacy.

Maybe he’d been too ambitious, setting his sights on the biggest mystery of the universe. Maybe he should have focused on algae; everyone always wanted to know about algae. Or maybe he should have studied mythical creatures, the beasts of legends, like those “fish” that caused so much excitement. He sniffed, remembering the size of the crowd that had gathered at Professor Echiniscus’s presentation. They had clustered around her like hatchlings!

Never mind. They’ll come to their senses. Even if those slithering giants really were living creatures–the thought made him shiver–the fact had little bearing on the deep mysteries of the universe. Things were at play in the world that no known theory or law of nature could explain. The rising temperatures. The mysterious EM emissions. Those had to have a reason. The dark mass was the key, he was sure. Discovering it would bring the ultimate prize: the unified theory of the universe. That’s what they needed to study, not some “fish.”

Hypsibius trudged out of the auditorium, his hind-most legs scraping the stone floor. Outside, a clutch of fresh-skinned students removed the last of the presentation posters. In the banquet hall, the remaining delegates clustered around the bowl of rotifers they’d been feasting on throughout the week, Echiniscus in prime position among them. The large female looked as radiant and full of eggs as she had the day they had graduated all those seasons ago. Hypsibius hesitated. He was hungry but not in the mood to hear Echiniscus again, or worse, the other scientists singing her praises. He’d settle for moss, he decided, the lowest blades already sucked dry but enough left for his modest needs.

He’d barely managed to dig his stylets into a juicy leaf, delicious cell sap pouring into his mouth, when a hesitant voice sounded below him.

One of the students was climbing the stem, a male, judging by his small size, his skin almost translucent after a recent moult.

The student wiggled his stylets in a polite greeting. “I found your presentation entirely fascinating. The dark mass is the key to everything.”

Hypsibius’s skin tingled with excitement. At last, someone understood, even if only a student: something was out there, changing the world, modifying it according to unknown rules. But what? So far, the best of their instruments failed to provide answers. At times they glimpsed mountain-size shapes moving on the horizon, apparently of their own volition, like tectonic plates taking a stroll.

Hypsibius stifled a sigh. “I wish more of my colleagues agreed with you.”

The student settled himself on top of a particularly succulent cell. “I’ve been thinking, Professor. There must be some force moving those shapes, right? But what if… ”

The student dug his claws into the membrane, suddenly unsure.

“Well, what if those shapes were living things? Like the ‘fish’, only bigger?”

Hypsibius didn’t answer, lost between wanting to scream or to kick the hatchling right off the leaf.

The student seemed to take this as encouragement because he continued, breathless with excitement. “What if what we’re observing are acts of will? Not some unknown force or law but the results of the giants interacting and changing their environment?”

Hypsibius wiggled his claws, trying to regain his composure. This was just a student. Not his fault that everyone was so enamored in Echiniscus and her theories. “Well, if they truly had minds, would they be making the planet uninhabitable?”

The student started to answer but Hypsibius waved his leg. “Let’s address this scientifically. Tell me: what would these gigantic creatures eat? Do they have some equally giant plants with giant nuclei and person-sized ribosomes? No, you know yourself that cells can’t exist at such scale. And without cells there’s no cell sap to feed on. Do you see?”

The student twisted his maw, deep in thought.

“Still not persuaded? Then how about pressure?”

The student looked appropriately baffled, so Hypsibius took his time to suck dry another cell before pressing a claw against his plump abdomen. “We are just the right size for the juices inside us to give our bodies shape. But what would keep these monsters from collapsing on themselves, crushing their cells into a pulp? ”

The student seemed to shrink. “But… the ‘fish’? Do they even exist?”

Hypsibius nodded sagely. “A good question indeed. If they do, it’s only because they’re aquatic. But those shapes we’ve glimpsed are on land. The kind of pressure required to keep them standing would crush any living cell. That’s just basic biology, dear. Life cannot exist on such scale.”

The student shuffled away, claws scraping the stem in frustration. Hypsibius considered saying something encouraging, but there was no easing the pain of learning. He hobbled to the next juicy cell and pierced the membrane with his stylets. Sap filled his maw, fresh and invigorating. This wasn’t over. He’d be damned if he let Echiniscus win. He’d just have to work harder, apply his infallible logic until it inevitably led him to unlocking the greatest mystery of the universe. 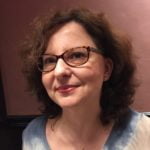 MV Melcer is a fiction writer and a filmmaker, with a primary interest in science fiction. Born in Poland, she has lived in the USA, the Netherlands and Belgium before settling in the United Kingdom. When not writing, she is working on a degree in astronomy and planetary sciences. You can find her on MVMelcer.com and on Twitter at @MVMelcer.