We live in an old red schoolhouse in the forest. The forest is thick and woolly, and at night you can hear the wolves sing.

Before the red schoolhouse, the adults lived in a city. They told us the city had trains and tall buildings and bad people who lurked in the shadows, ready to kill you for money or for fun.

We knew about the city because the adults gave us picture books of sad cartoon people living in gray buildings, taking dirty buses to factories and offices, and eating bad food. When one sad cartoon person got stabbed in the street, the other cartoon people moved around them, like river water around a rock.

Yesterday we found a trunk in the basement of the red schoolhouse. It had shiny, floppy books with pictures of beautiful people with paint on their faces and dressed in colorful clothing. They posed in front of buildings like the ones in our picture books, but the people did not look afraid and there were no lurkers or stabbers. Underneath the books were clothes we had never seen before–they felt soft like petals and smelled like lavender, so unlike our scratchy uniforms. A small wooden box at the bottom of the trunk was full of tubes and jars filled with paint, just like in the books. We put on the too-big clothes and drew the paint on each others’ faces and danced around until we realized the adults would be home again soon. We changed back into our old clothes and ran to the creek to wash off the paint–we were ashamed but did not know why.

At dinner, we asked if we could visit the city. The adults wiped their mouths with their napkins and told us it was too dangerous. We would get sick, or shot, or kidnapped. When we asked what kidnapping was, they told us a kidnapper was a bad person who stole you away and never brought you back. When we asked where the bad person would take someone, the adults told us that was enough questions for one night and it was time for bed.

In bed, we whispered to each other guessing where a kidnapper would take us. A castle. A prison. A mountain. An island. A city. The moon. Then one of us said, a red schoolhouse. We stopped talking and tried to sleep.

This morning we quietly rubbed deer fat all over the adults’ bags while they slept. We waved goodbye to the adults when they left for their daily walk. Then we sat in a circle inside the red schoolhouse, waiting. At dusk, we heard the wolves howl their feasting cry. When the usual time for the adults’ return came and went, we smiled at each other. We stood up, had supper, and went to bed. Tomorrow we will walk to the city–we agreed it can’t be too far.

We will be safe there. 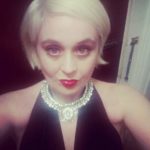 Katherine Bergeron's writings have been published by The Haven, Queen Mob’s Teahouse, The Satirist, The Bigger Picture, All Worlds Wayfarer, The New North, and Circlet Press. She studied film at Emerson College, and later publishing and communications at Harvard University. Coverage of her work has been featured in print and television, including The Boston Globe, The Boston Phoenix, The Dig, and WCVB-TV’s Chronicle. She lives in Boston. you can visit her website at DameCore, her instagram at DameCoreInc her twitter at DameCoreInc.