I hated the grate in my apartment.

Relieved as I was to have my own place, I was less thrilled to live in a basement studio with a hole in the ground.

The summer before my senior year in college, I fell out with my old roommates—snobby comments about how I was a fool for aiming for a PhD rather than an MD led to an all-out shouting match, and I was done. The new apartment complex I found was an older brick building, but the model apartment passed the smell test and, more importantly, I could afford the rent.

I didn’t know I’d end up in the basement, almost fully underground. A few small windows near the ceiling let in a pittance of natural light. They were narrow enough that at least I wasn’t worried about someone breaking in.

I could live there for a year. The biology grad program at my current university was on my horizon, assuming I got accepted. It was well respected, with a generous stipend for students.

So I tried to ignore the grate. It sat on the far end of the main living area, which had been “recently renovated” according to the man in the office when I moved in. I guessed that meant that they pulled out the old carpet, leaving bare concrete behind. The grate was a foot square, made of dark metal; it looked like it belonged on a sewer. The holes in it were large enough that my spare change and pens disappeared. I often heard them bouncing off the damp stone on the way down.

Since I lived in a studio, I saw the grate from my bed. The noises and scratching down there made it hard to fall asleep. Mice or bugs, I assumed, though I never saw any.

After a fortnight, I headed to the big furniture store nearby and selected a large cream-colored rug. But cool, dank air spilled up through the grate, and within another fortnight, the air stained the rug yellow and brown in that spot. Disgusted, I threw it in the trash and put down a thick vinyl mat covered by a new rug with a rubber bottom.

Every few days, I found the vinyl and rug pushed over by a few inches, enough for damp air to reach my nostrils. I moved the coverings back into place. The next week, I found stranger stains on the carpet, as though someone spilled black ink on it. Annoyed, I removed the carpet from its rubber bottom and dumped it into the washer. That same night, I fell asleep on my couch.

I woke to the sound of fire alarms blaring and coughed. Oily smoke poured in underneath my front door. My hand hovered over the doorknob, but I felt the heat radiating from it. Fire crackled on the other side of the door, and I staggered back.

I grabbed my backpack, gathering up my laptop, keys, and wallet. And a hammer from my toolbox. I climbed up onto the back of my couch and slammed the hammer into the glass window. It bounced back and I swore. Coughing on smoke, I smashed at the glass harder, enough for it to crack.

It broke, leaving jagged shards in the way. Clearing as many as I could, I pushed my backpack through the hole onto the grass outside. But as I hoisted myself up, my hand caught on glass I had missed. It sunk into my palm and I jerked back, losing my balance. I tumbled to the floor.

Whether I hit my head, I didn’t know, but everything hurt as I lay there, unable to breathe. I wheezed, the room spinning around me as I tried to rise and instead blacked out.

I slid in and out of consciousness, vaguely aware of damp air on my face and the smell of rust. Something grabbed me around the waist and legs, and the room tipped sideways as I slid.

I woke to prodding at my rib cage. My eyes shot open, though I could see little. Rising to my knees, I ran my fingers over the damp stone and dirt around me. That same odor that wafted up from the grate hit my nose, so I suspected I must be underground. A soft blue glow suffused the far end of the room, enough that I saw the outline of the stone chamber. Tiny points of light on the ceiling suggested bioluminescence.

I crept forward into a room with a higher ceiling. The far half of the room lay in shadow, and something there rustled.

A shape in the shadows moved, undulating in the dark. Hesitantly, I walked forward. Before I could react, something shot out, snaking around my arm. It was a slimy tendril of unknown biology, and I yelped. It prodded at my injured palm, pressing something into it. Left behind was a smear of paste that glowed with soft blue light.

It shuffled back, away from me. Whatever it was, it was big, at least the size of a car. Creeping forward, I made out the shapes of more tendrils, and perhaps a central body. And eyes. The dim light glinted off the edges of them, reflecting the glow of the bioluminescent flora on the walls. The eyes darted back and forth, and the creature backed further away.

Nearby, the light glinted off something else and I spotted a small pile of coins and pens I had lost down the grate. Or maybe that were pilfered from my apartment.

The shadowy mass shook, as if trembling. I halted, opting instead to hold out my hand. A tendril cautiously wrapped around it and I gave it a firm shake. It unwrapped, pointing to a passage out of the cave.

After fifteen or twenty minutes, I squeezed through an almost hidden gap in the rocks and emerged. The light outside blinded me, and I found myself in a forest near my apartment complex. It was still smoldering, and I retrieved my backpack from the firefighters. No one died in the fire, but the apartment complex was unlivable.

My new apartment doesn’t have a grate. It’s a short walk out to the woods, to the cave entrance.

Sometimes, I go back and visit my old roommate. 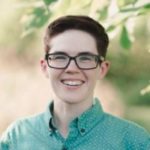 Catherine Yeates is a freelance writer and artist. They enjoy creating speculative fiction that draws on their experiences as a neuroscience researcher. They live with their spouse, cat, and two rambunctious dogs. Find more of their work at their website or @cjy.art on Instagram.