There are only three things you can be: the Witch, the Witch’s Wife, or Soup. Regina gets to be the Witch because she lives in the woods and made up the game and because she has black places where her eyes should be.

“Did you bring a magic treasure?” Regina says, and when Kara-Lynne puts out a Sacajawea gold dollar, Melanie knows that she’s lost. She stares at the coin and hates – she hates this game, she hates Kara-Lynne, and she hates Regina, who smells like a baby tooth and laughs like a baby screaming. Who wants to be the Witch’s Wife anyways?

She does. Melanie wants to be the Witch’s Wife more than anything.

The Witch’s Wife gets to be magic, like the Witch.

So she stomps her foot and throws down her own treasure – a quarter with Florida on it. She says, “Disneyworld is in Florida, and that’s the most magical place on Earth.” And even though her Mama says Complainers Never Prosper, Melanie says, “This isn’t fair. These rules are arbitrary.” That’s a new word she’s learned in Homeschool, which is where she’s supposed to be, but Mama has a Migraine and is Laying Down and Doesn’t Have The Energy For Homeschool Today So Go Outside Please.

Regina looks at the gold coin and the quarter and she nods, saying, “Kara-Lynne wins,” which isn’t fair, because Kara-Lynne comes from Columbus Street where all the kids go to private school and what is she even doing down here anyways?

“How much more?” Kara-Lynne says. “We’ve been playing forever. Don’t I win yet?”

They get fifteen minutes for finding.

Kara-Lynne goes first again. She puts down a magazine that looks like it’s been dropped in the bathtub.

“It’s my brother’s. The girls in it are like, pulling their buttcheeks apart and stuff. It’s SO gross.”

Melanie puts Sandra on the ground and when Regina wrinkles her nose, Melanie panics and picks up a rock and smashes Sandra flat.

“Melanie wins,” Regina says, and smiles. Her teeth are like needles.

Regina scrapes flat dead Sandra off the wet leaves and puts her and the crackly-page magazine in the Witch Bag. “It’s a draw,” she says. “Follow me.”

Melanie tries to trip Kara-Lynne as they head deeper into the woods, but Kara-Lynne steps around Melanie’s foot and says, “You can cheat, but you’re too dumb to win.” By the time Melanie thinks of a comeback Kara-Lynne and Regina are behind the trees and under the dark drippy pine needles, and she has to run to catch up.

The well is old and half-covered by leaves, and there are shoes all around the bottom of it, black buckle shoes and Spiderman sneakers and fuzzy slippers. Melanie hopes the last thing isn’t she has to give up her shoes. She and the girl next door traded shoes last week and Mama was Really Mad.

There’s a cover on top of the well. The wood is soft, spongy. It smells like basement. The water is right up to the stone rim, and when they get the cover off, the black water laps around. It sounds like a dog getting a drink.

“Last task,” Regina says. She fishes in her Witch Bag and comes up with the Florida quarter and the Sacajawea gold dollar.

“Make a wish,” she says, and gives them their coins back. Kara-Lynne closes her eyes and whispers a wish, probably for something stupid, like a pony or for her daddy to not be dead anymore. Melanie squeezes the quarter in her fist and begs, Let me win let me win let me win.

They throw their coins into the water.

Regina smiles. “Whoever gets their coin back first, wins,” she says.

The coins tumble in the dark water, end-over-end.

Melanie looks at Kara-Lynne. Kara-Lynne looks at her. And then they’re both running. Melanie scrambles up the slimy well stones and she falls in; the water soaks her up, freezing, and her clothes suddenly weigh a thousand pounds, and then Kara-Lynne’s foot is smashing her in the face and Melanie claws up and chokes, “Get out!” and Kara-Lynne shouts back, “You get out!”

Kara-Lynne throws her butt up and dives, kicking like a frog.

Melanie heaves herself out of the well and strips off her shoes and sopping wet sweater. When she jumps back in, the water is warmer. Kara-Lynne is coming back up, her face as white as Dead Sandra’s belly. Her hands are empty. Melanie pushes Kara-Lynne back down with one foot, and then dives.

“Only a couple of minutes left,” Regina calls. “Otherwise no one gets to be Witch’s Wife.”

It’s dark and the water is hot as bathwater. Melanie claws deeper. The marble and the cinnamon stick and Dead Sandra and Dead Sandra’s streaming guts drift down past her.

Her lungs start to burn.

The water is so hot.

“Better hurry,” Regina calls down. Her eyes blaze like black suns. “I think Kara-Lynne is winning.”

But how can she be winning? Kara-Lynne is way down there. She’s not even swimming any more. 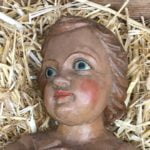 Ashlee Lhamon has an impressive lunchbox collection and a tuxedo cat named Gumshoe. She's not on social media, but you can find her other work at 7x7, Cotton Xenomorph, and Tales to Terrify.