Well, he was the enemy, you know. I mean, yeah, it was a game and all, but it was like, you know, more than a game too. I mean, we all agreed to it, to the rules and all. He did too. Roger. He agreed. I mean, somebody has to be the enemy or you can’t have a game at all. There’s gotta be an enemy. And he volunteered. Roger. I mean, we were going to choose, draw straws, but he volunteered.

Ray set it up. He’s like a genius, you know. He’s the one who had the idea for the game in the first place. And he set it all up, just like in the video. I mean I only played it a couple of times. Treasure Hunt. But Ray, he really loved it. He played it every chance he got.

It’s like these two muscle-bound guys, you know, warriors, and they keep running into each other and fighting all the time, trying to kill each other over some hidden treasure. But neither one ever really dies, you know; they always come right back for the next game. And neither one ever got all the way to the treasure. Not when I was playing. I don’t think even Ray ever got that far. So maybe that’s where he got the idea. You know, like he could maybe get to the treasure if he set the game up himself.

‘Cuz Ray had it all figured out. I mean, Roger and me, we’re bigger than him, but he’s smarter, you know. So everything seemed perfect. Ray would be the player, and Roger and me would be the warriors fighting for the treasure. And that abandoned boxcar out by the graveyard was the perfect place to hide a treasure. I mean that old boxcar even smelled ancient, like some old chest you just dug up. The sides were gray wood with chips of red paint curling off all over.

So Ray worked it out so I’d get there first, ‘cuz I was his man, you know, the hero. But instead of me going right for the treasure, I was supposed to wait on top of the boxcar, first take out the enemy, and then go in. So we had cell phones, Ray and me, so he could tell me what to do, ‘cuz he was the player, you know. And I was just his man in the game. So I couldn’t talk back on the phone or act on my own. I just had to go where he told me and do what he said. Those were like the rules.

And at first I thought Roger had a disadvantage, being the enemy you know, all on his own. But pretty soon I realized I was at a disadvantage too, maybe even a bigger one, ‘cuz I was like this mindless toy, like some puppet Ray could move around. I wasn’t supposed to think for myself. I mean, I could think, but it didn’t matter. According to the rules, I couldn’t act by myself, you know. I could only do what Ray decided, no matter what I thought myself.

And that cost me, you know. That’s what got me. ‘Cuz when the time came for the fight, Ray was too far away to see Roger’s weapon like I did. I mean, I could see it, just before I jumped off the boxcar, that nail in the two-by-four, but all Ray told me was he saw Roger pick up a piece of wood when he headed for the boxcar. And he just figured I’d knock Roger down before he got a chance to use it. Maybe even Roger didn’t see that nail in the board.

So anyway, Roger got to the boxcar door, Ray said, “Now!” and I dropped the phone and jumped. But Roger must’ve heard the phone above him, and he swung the two-by-four up.

I saw it coming, like in slow motion, before it hit me—Bam! in the face. My eye was gone before Roger and that two-by-four hit the ground, and a bolt of fire went all the way to my feet.

I was supposed to wait, you know, for the next order from Ray, but the phone was gone now, and when I pulled my hand away from my face, it was hot, and sticky, and red, and I saw Roger on his knees, looking around for his weapon, and—

It was like the game changed then, you know. I heard a loud echo in my head—Eye for an Eye!—roaring, like at the start of that other game, so loud I didn’t hear Ray yell, or see him running toward us from the graveyard, like he says he did. I just heard that deep voice from the other game throbbing in my mind and—I got confused, I guess, waiting for Ray’s order and hearing Eye for an Eye! over and over and—

I got to the two-by-four before Roger, and swung it, aiming for his eye, I swear, but he must have seen it coming and turned and—then I heard Ray yelling, “Stop!” but—too late, you know, the board already swinging, Roger turning and Bam! The board, you know. It broke against his temple and—a part of it stuck there and—Roger, he just stiffened all at once, and then crumpled down and—well, I guess we knew it was over then.

Ray got the boxcar open, and we got Roger inside and covered him up over in a corner with that old packing material in there.

I never even thought to look for the treasure. I don’t think Ray did either. I mean, it’s probably still in there, wherever Ray hid it. Whatever it was. But I guess it doesn’t matter anymore. The treasure I mean. The game’s pretty well over now. You know. 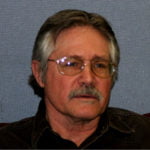 Neil Harrison’s most recent stories have appeared in Pinyon Review and Panoplyzine. A former instructor of creative writing and the coordinator of the Visiting Writers Series at Northeast Community College, he lives in northeast Nebraska with his third drahthaar, the Happy Dog. Follow him on Facebook.