The Middle Of The Atlantic Ocean

Chunks of salt dug away parts of my skin and my knees buckled beneath the swaying deck. I
could barely see my two feet in front of me, for the fog was thick and lingered low. Waves
crawled and crept up the sides of the boat like a cat’s tongue with milk, and far out they clapped
and crashed into nothingness. My once alabaster shirt did more than ripple as the wind lashed
me; whipped me; dragged out parts of my soul. My deep hazel eyes struggled to stay open, and
thick rain drops hung onto my long eyelashes like dew upon spider webs.

We had strayed off-course long ago, and a hollow emptiness of unspoken anxiety was forever
flooding our brains; blocking the joys of optimism. My hair was flung into my small, round face,
my eyes brimming with tears from the salt that rubbed them red-raw. If it wasn’t orders from the
crew that filled my ears, it was the gulls that made sure clear thought was a rare luxury.

The trip so far had almost dragged every drop of strength out of me, yet it still demanded more
physically and mentally. My long blonde hair had remained in French plaits since we had set
forth on the journey, partly due to the feeling in my fingers that had disappeared, making
everyday tasks – such as doing my hair – arduous work.

“Onwards starboard!” cried Jim – the brawny captain. He was holding a nebulous lantern with a
shaky, flickering flame held within. Trapped – like me; hoping for an end – like me; sick of contemplating the fulfilling life promised to me, but never achieved.

Amongst the chaos, my wandering eyes managed to find their way to the light on the top of
Jim’s cabin, where he sat for many hours of the day, struggling with the wheel. It was only last
week the helm had snapped clean off. We had just sat the entirety of the night, letting the lurching waves take us where they wished. All sense of direction had been lost. We now
struggled on with paddles and every inch of our strength, hoping for some sight of land – not
that we could see anything in the horrors of this weather.

The light on the captain’s cabin was a rather strange topic amongst many in the crew. It never
turned off – even during broad daylight. Not one of us could find the switch to control the peculiarity. And, even stranger was the fact that the quiddity was indestructible. Father had once gone up, shovel in hand, with the intention of destroying it. He spent all day up there, before finally accepting that his labors had only equaled to nothing more than a small scratch on the paintwork.

Mother and father had been rather strange recently. They would keep saying, it wasn’t safe to
talk, or that they have some business they must be attending to. I would have thought that they
would be happy. They are explorers, you see, and their Boss had them banned from heading
abroad for two whole years. They had found a new species of elephant living in the arctic and had chosen not to tell anyone under any circumstances in order to keep it out of the public eye. They feared that if word got around, as it normally would, the elephants would be in danger. Their Boss had never really forgiven them.

This was their first trip outside of the rather tedious Kingdom – once known as London – since
the 6th of March 2084, and I would have expected them to seize every moment, but that wasn’t
the case. This trip had a sombre cloud hanging over its own dejection.

60 years ago – in what was the United Kingdom – the paths of the Irish, Scottish, Welsh, and
us English had become too different. The people of London had expanded and concluded that they were better suited as a Kingdom of their own greatness. Our leaders of England re-settled
themselves elsewhere, and let the rest of the United Kingdom – not that it was united for
much longer – find their own way of life. It was like washing our hands of the coronavirus
decades ago.

This had only led us down a spiraling drain of apocalypses. First came the Amber-Scoliosis
pandemic, then the tsunami, and most recently the barbaric Nuclear War of the 21st Century.
Each had caught over 30 million people and snatched away their lives. The Kingdom was said
to be a beacon of hope, but from my own eyes, all I saw was a cloud of pollution haunting the
skies.

Mother had said that the exploration of the old Amazon Rainforest was the adventure of a lifetime for an explorer, and even more so for a simple child like me. I had been filled with wonder of the future that might soon become the joys of my life, but as I sat drenched and struggling to maintain upon my feet, I wondered whether staying with the Fosbots – the stalking robots, although the government claim they simply ‘supervise’ – would have been a better idea. Here I was – stuck because of my fiery temper and headstrongness.

My knuckles paled as I grasped tightly to the edge of the ship. A hefty, inky figure barged past me. “Father?” I had hardly recognized him. He briskly turned around, his face as though he had seen a ghost.

“I suggest you stay below deck, Emily. It’s going to be a rough night.” he said in a gruff voice.

“Emily, below deck. Please.” I could see the pain in his eyes. He never was known to be good at hiding his emotions, and today was no different.

I plodded down to my cabin, awkwardly maneuvered into the swaying hammock, and stared up at the bleak lantern. However, I had no intention of remaining there. The soul of the ship trembled, the waves continuously beating it.

I lay, drowsy and fatigued, mulling over the perplexing events of the past few weeks. Mother and father were distracted; the crew gave no secrets away; problems continued to stack upon problems.

I sighed heavily before a fulmination stunned my eyes. I instantaneously sprung to my feet, staggered towards the door of my cabin, and fumbled with my door handle.

Out in the corridor, Melissa, the maid was curled up in a ball quivering, hands over ears. I persisted in my journey to the top deck in a nonplussed state. I approached the stairs, only to discover the familiar crashing of the ocean had dematerialized. One by one, the crew began to plummet. Each one, grasping their ears tightly with their eyes lolling.

“Mother? Father?” I called into emptiness, not really wanting to find them in the same state as everyone else.

There was no response. I couldn’t quite work out whether that was a good thing or not. I was on my own. No one to fall back onto if I needed to, and no ocean to drown out my tears, spit at me and wash away the stains the tears left. 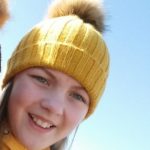 Daisy Blacklock is a young writer, aged 13, who hopes to achieve her dream career in the future: a full-time writer.