I can’t bear the creak that comes from my chair at night. Steadily rocking, back and forth, back and forth. Ghosts have no respect, honestly. This particular one is called Gertrude. She’s been rocking in my office chair for the past three weeks and it’s probably time I do something about it.

Occasionally, just as I’m drifting off, she will say in a croaky voice just loud enough to hear, something like, ‘you forgot to turn the oven off.’

I’ll know that I haven’t used the oven all day, yet I’m unable to get the oven out of my head. So, I get up to check, just to make sure. It is, of course, switched off.

‘Made you look,’ Gertrude says on my return.

She tuts. ‘Kids these days, no respect.’

I sigh, turn over and close my eyes. Ten seconds later, the creaking begins again. And a few more seconds after that another whisper. ‘Did you remember to lock the door?’

And the whole process begins all over again.

Sometimes the threats are more sinister, like last night as I was drifting off, she said, ‘your teeth would make an excellent necklace. My husband never bought me pearls.’ Three nights before that, she mused, ‘have you ever thought what it would be like to be buried alive?’ My teeth are still intact, and she’s never attempted to suffocate me in my sleep. She’s not a particularly committed ghost at least, but I still don’t like her being there, always watching. So, what do you do with a slightly annoying ghost?

I’ve tried pouring salt on the chair, nailing a cross to it, burning sage in the room. The usual stuff. I’ve even tried sitting and sleeping in the chair itself, but it only gives me a sore back and Gertie comes back the next night as soon as it’s unoccupied.

I’ve decided to visit Gertie at the cemetery – maybe I’ll find something out there that will help me. The cemetery is quiet, and I wonder why she doesn’t just stay here as it seems the perfect haunt for a ghost. Peaceful, green, open space. No chairs though. After a few hours of searching I find a gravestone that fits the bill: Gertrude Wilson, written beside a Marlow Wilson, her husband. The epitaph reads: Forever in our hearts, never truly gone.

There’s construction noise from my left. They’re moving some of the graves. It gives me an idea.

That night, I stay awake, lights off and wait for the creaking to begin. Before she can speak, I say, ‘Gertie, have you remembered to check that your grave hasn’t been disturbed?’

I smile and sigh. ‘I was just at the cemetery today. They’re moving some things around, plots and such.’

It’s been five minutes, and I’ve not heard a single creak. Satisfied that she’s finally gone, I close my eyes.

I’m awoken in the night by a scraping on my door. I jolt upright. A shiver runs through me.

‘You left the window open,’ a deep voice says. Not Gertie.

I look over to the curtains which are, right enough, moving with a breeze. Odd. Tiptoeing out of bed, I go over to the window and close it.

The bed when I return is full of dirt and grass. Silvery white stones glisten in amongst the soil like seeds. No, not stones, teeth.

‘A gift for my Gertie,’ the voice says. ‘She sends her regards.’ 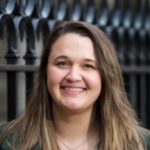 Lyndsey Croal is an Edinburgh-based writer of speculative and strange fiction. She is a Scottish Book Trust New Writers Awardee, and her work has been published in several anthologies and magazines, including Mslexia's Best Women's Short Fiction 2021. In 2021, her debut audio drama was produced by the Alternative Stories & Fake Realities podcast, and she is currently editing Ghostlore: An Audio Fiction Anthology, with the same podcast. Find her on Twitter as @writerlynds or via Lyndsey Croal.