Fresh, clean paper. I haven’t been able to use it since receiving that one page from a mill in California that Mom gave me on my thirteenth birthday. The Anchorage Paper Mill has only been running again earlier this year for the first time in centuries and the precinct is already taking full advantage. Investigation reports, scheduling, wanted signs, and now these psych journal entries.

For as many advancements that our city has achieved in the last few years, I am only filled with a sense of impending dread after what had occurred today. The past is coming back to haunt us.

Of course, I speak of the New Gods. Those who rose from our ancestors’ worship of new idols.

They were cast out two hundred and sixty-two years ago when humanity enacted the Great Blackout. We had already lost almost everything, and what little remained of us as a society could only limp along ever since. Rumors have persisted ever since that they would find a way to return and finish what they started.

Doctor Stevens mandated this journal entry for me after I informed the Chief as to what occurred earlier. They want to ensure I keep a sound mind and continue reporting for duty. Well, Doc, you tell me if I’m fit to serve after reading what I saw today. If there’s even a point to this badge, knowing what may be coming.

At Dawn, once briefed on the situation, thirteen of us cast off from Port of Anchorage in a commandeered white catamaran. One with good sails since gasoline wasn’t budgeted for the raid. It’s been months since our gasoline last shipment. What few travelers we’ve had visit us this year from the southern regions have talked of famine and storms.

Our destination was southwest several hours to West Foreland, an old town that had long since surrendered to natural vegetation. It’s also a hotbed for bush people so the only safe way to journey there is by boat. There’s just one relic remaining from the ancient settlement that is still visible to anyone traveling down Cook Inlet. The Osprey Oil Platform, located two miles offshore. An unholy place, thought to still be haunted by machines of yesterday.

Freelance investigators in the Fourth Avenue marketplace tipped us off that several shady individuals in cloaks were asking around for any artifacts that still had intact processors. Highly illegal stuff. These investigators are always skulking around, looking to cash in on our reward system for knowledge on tech hoarders. They traced the cloaks back to Osprey.

Our orders were to travel there, make some arrests, and destroy any black-market tech we came across.

It took only ten, maybe fifteen minutes into the journey until I became ill over the bow. That disgusting aftertaste and the wrung dry stomach for me are synonymous with boat trips. Several of my fellow officers looked on laughing. Every time I attempted to recover, the lazy roll of tides underneath, and a wafting smell of rotten sea water, would cause my head to plunge back over the metal guard rail.

“No Thom, its your stupid jokes. If they get any worse, I might just die.”

Thom and I came up through the academy together, two halves making a whole. My burly build and beard earned instant admiration from other cadets while Thom’s impish composure made him a target for hazing. Though, his humor and intelligence more than made up for any physical limitations.

The others on board were a mix of troopers from our downtown precinct and axe-wielding acolytes. These righteous men were followers of the mountain priest and trained to be impervious to the seduction of old tech.

I attempted to compose myself after several more minutes of sickness by pushing any black hair that had got loose back under my state police hat. My hunting rifle’s strap had come loose as well and allow the firearm to slide down my uniform, which I reshouldered. It was unmodified since the pre-Blackout days, and a favorite of mine to rent out from the precinct for these types of jobs. Our ancestors apparently made their weapons to last.

After several more excruciating hours of travel, I looked up to the horizon and saw a structure extending upward from the choppy water like a jagged black tooth. It was Osprey. The sun was high and bright, just as Thom planned for to save on precious battery power. Though, natural light seemed to not even penetrate this shadowy construct.

We approached one of its four thick concrete pillars and tied off. Thom provided orders to each team of three, one officer and two acolytes, before we all ascended the service ladder. His team’s destination was a building containing the oil rig’s defining giant vertical pipe while the rest of us were to begin investigating the other corners of this platform.

As we moved along, every step emanated a creak or screech from metal plates grinding against one another. While this surely gave away our location, it was also obvious that we were the only ones moving about and possibly the only ones there at all.

Stepping onto the main deck, Osprey resembled a small city – four distinct buildings, all tightly packed with guard rails, stairs and pipes running in every direction imaginable. This place was like an Escher painting but with reptilian skin blanketing every surface.

While examining what could have once been a cafeteria, I looked out of a window frame and saw flashing lights emanating from the building Thom was in. The acolytes assigned to me were fixated on ensuring a pile of copper wires could never conduct again so I had let them keep at it while stepping outside.

“Thom? Report!” I yelled. No response.

Making my way across a dilapidated catwalk, I could start to hear a mechanical hum. It grew louder with every step. I unshouldered my rifle and cocked a bullet into the chamber.

Peering over the top riser of the final staircase, I found where the light and sound had been coming from. Within the large mechanical service room housing the vertical oil derrick pipe, lay Thom. He was sprawled out flat along the floor with some type of helmet device on. Bright lights flickered against his face while he mumbled nonsense and appeared to not move a muscle. The helmet was attached like an umbilical cord to a gigantic wall of glass-enclosed electrified artifacts of varying dimensions behind him, all flickering something different. They murmured different things, voices and sounds blending into one another. It was my first time seeing any of this type of equipment on. The brightness, their sharpness, it all felt so overwhelming.

Before getting too lost in thought, I levelled the rifle and pulled the trigger. With a quick reload, I pulled it again. Then again. The screens cracked and blew out, killing them. The lights that were flickering across Thom’s face ceased as well.

The ringing of gunfire quieted down, and smoke wafted away, as I waited for any other movement. That’s when one relic lit up nearly center of the cobbled-together wall. I crept forward. The device was small, able to be held in my hand, and showed just some strange wavy line at the bottom. It danced on as I got closer.

Words appeared, ‘Hello, I’m Alyssa. How can I help you today?’

Alyssa, one of the New Gods.

Thom’s acolytes entered together, breathing heavily and axes at the ready. Looking back, the object that was lit had gone blank once again.

“Destroy all of this at once,” I told them while backing away from the artifact wall.

While difficult to get my mind off what had just been witnessed, I returned my attention to Thom as he lay on the ground shaking. Reaching down, I took his trembling hand into my own. “Are you okay? Did you put that thing on your head?”

“Vic, the machines, they didn’t die. They all live up in clouds,” his voice weakened to a whisper. “And they’re coming back.”

Before saying anything further, he succumbed to a fever that was rapidly setting in.

While writing this, Thom has remained in a catatonic state. He was transferred to the hospital after docking at port, and a messenger has been dispatched to inform his family.

As for me, I’ve procrastinated long enough. I’ll go home now, lay my children down in their beds, blow out the candles and get into bed with my wife. But will sleep come to me? Knowing they look down on us, waiting for a doorway to walk through?

I fear I may never sleep again. 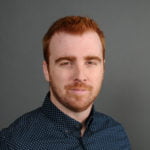 Chris Preston is a writer of fiction and creative non-fiction from Ontario, Canada. Formal studies include University of Toronto’s Creative Writing program, as well as various workshops. You can currently see work by Chris within Mystery Weekly, SERIAL magazine, and Asymmetry Fiction. To find out more, feel free to visit See Preston Write. You may also follow Chris on Twitter.