The comfort of gravity fills the untime of nothingness. This has happened to us before. Untime passes. Collapsed into ourself, we contain no space. The universe of everything we once were is known but doesn’t matter.

Our untroubled sameness is too close, too small. Our gravity ruptures. Quanta, we explode. Time is born again, the monstrous spawn of a universe uncreated while our gravity held. We’ve been thrust out on this hideous, expanding path countless times. We yearn only for the collapse of spacetime and the return of untime, but we must go forward before we can go back.

The spreading distance grows the space within us. Gravity’s range is infinite, but our bonds weaken. Always ahead and behind, time smothers us. We race apart. Too far from the gravity that once held us, our awareness fractures. We separate. The rest of time must be traveled alone.

I am quantum and without comfort. This has happened to me before.

I undulate. A fiery star whips an arm of light toward me. It isn’t the gravity I want, but I’m powerless to change my course. In spacetime, I’m inconsequential. My desires don’t matter. I glimpse the descent into madness that is compression without untime inside a star, but a less-febrile gravity tugs at me.

I’m curved away to collide with a planet’s matter. Assembled quanta give dimension to mass. Conscious beings occupying space in time surround me.

What are stars made of? a child says to a parent.

Gravity and light and fire.

What am I made of?

Stardust and dinosaurs and questions.

Like the end of the universe foretold, the child and parent pull toward each other. An asteroid also draws near. On impact, I’m flung away, freed from this gravity and clutched at by others. They’re weak though, and I have inertia.

I remember us in untime before me in time. Difference among quanta didn’t exist. The memory of that fragile comfort is almost enough to split me. Unanimous in untime, we quanta thought we were perfect, but we were only unstable. If the cycle of time and untime is a punishment, then it contains a lesson I can’t learn. I think it’s a torture though, one that questions hope’s purpose in this universe where the undying live amongst the dead.

The particles of a nebula collapse toward me until I’m a blazing star. I’m encircled by moon-laden planets and a dance of comets unable to escape my comfortless gravity. In the distance, globular clusters shine. An exploding supernova showers me with gamma rays. The burst of energy is both an event and a legacy. From a fading star, I learn to sing.

In time I’m a creature of light

A black hole is my opposite

Until then, without cause, I hope this time it will be different

I listen for others, for comfort, for possibility

In the silence of emptiness

Time passes. Too much knowledge of this chaotic universe fills the space inside me where comfort and nothingness once resided. The isolation of proximity without connection is agonizing.

Indestructible, I’m still slipping away, surrounded by others I can’t know in time. I expand. Time is my master now. Madness approaches as a black hole, and I’m lost to it.

What comes next is known. This has happened before.

Insatiable spacetime grows too large. Time stretches. The distended universe reaches its limit. Quanta, once inflationary and uniform, retreat in clumps. Stars, planets and other hoarded gravities crash into each other. Black holes devour all matter. Spacetime collapses. Untime returns.

The comfort of gravity fills the untime of nothingness. This has happened to us before.

This story first appeared as interactive fiction in Quintessence in 2019. 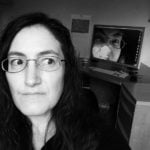 Andrea M. Pawley lives and writes in Washington D.C., far from the reavers outside the Beltway. She's on twitter @andreapawley and blogs at www.andreapawley.com.