In the year 1,001,945 AD, long after superweapons have caused the human species to go extinct, the next-to-last prisoner in Hell goes before the parole board. No other doomed soul had ever received so long a sentence and burned in Hell as long as the man with the cartoon mustache. He has done his time – but releasing Hitler to join the billions of human souls in Heaven is still up to the parole board, five ghostly, robed figures on pedestals at the front of the hearing room, staring down with stern eyes.

“I believe I have been rehabilitated,” Hitler says in German through a translator device. His left hand trembles as he speaks. “As I burned over the past million years I reflected on my many crimes and I believe I can now be a positive contributor to society.” His soul is a translucent version of himself at the time he died, in his field uniform jacket with a bullet hole in his right temple. His coat is scorched, much of his dark hair has burned away, and his skin looks like overcooked tuna. Only his mustache is still intact.

The parole board grills him for hours with question after question about his actions during his years as the German leader. Always he is contrite and apologetic, and yet sometimes he shakes his fist and rails about how he would do things differently now and how he hopes they will allow him to show how much he has changed.

The parole board confers and finally agree. Hitler is released.

Outside the Gates of Hell billions of souls gather to protest. Many hold protest signs. Others have pitchforks and torches, which can’t harm a soul – very little can – but gets their message across. The massed souls chant over and over, “Hitler go? Hell no! Hitler go? Hell no!”

As Hitler’s soul walks toward the exit, the last prisoner in Hell attends his parole hearing. He is a tall, blue-eyed, balding man, with a more normal but sparser mustache, and a left ear that sticks out like a crooked antenna.

“I believe I have been rehabilitated,” the old Jew says, speaking quickly, as time is of the essence. “I was wrong to commit murder against the wishes of the parole board, and it will never happen again.”

The parole board asks no questions of this long-time acquaintance and the old Jew’s soul is quickly released. He hurries to catch up to Hitler even as the parole board rejoices that Hell is empty for the first time since the arrival of Cain.

Hitler walks slowly with a slight limp up the long stairway from the crimson Gates of Hell to the pearly white Gates of Heaven. The reeking smell of brimstone slowly changes to roses and honey. Six million screaming Holocaust Jews and millions more, on leave from Heaven, jam the sides. Only the high side-rails keep them from trying to tear his nearly indestructible soul limb from limb. Hitler’s glowering blue eyes seem to hit on every one of them, but they only shake their fists at him more.

Then the old Jew catches up to his fellow Austrian and taps him on the shoulder.

“My name is Simon Wiesenthal. You killed six million Jews and untold others. You will not be released.” He raises a futuristic-looking handgun and aims it at the Fuehrer. No one knows how the old Nazi hunter had gotten a special-made version of one of the superweapons that had ended the reign of humanity, forged from melted down Nazi iron crosses.

“Who are you? What is that weapon?” Hitler cries out. Suddenly the Nazi Fuehrer lashes out, punching Wiesenthal in the face and knocking him to the ground. Wiesenthal drops the superweapon. Hitler grabs it.

“You thought to kill me?” Hitler cries, standing over him. “You, a Jew? Don’t you know that providence watches over me?” He aims the weapon down at Wiesenthal, shaking it theatrically. “You pathetic old man, you will die like a dog, like all your kind.”

Wiesenthal stares back, justice and his life’s work destroyed right at its climax. “So close, so close,” he mutters. Was providence truly on the side of the German monster? But he would not give in so easily. He braces himself to lunge at this horrible human soul, knowing he has no chance.

A black and yellow figure flashes over the rail on the side of the stairway. The large, slightly luminous German Shepherd comes down on Hitler, grabbing his arm in its slobbering jaws. Hitler screams and drops the weapon.

“Du auch, Blondi?” a shocked Hitler cries as his dog, the one he’d killed with cyanide so long ago as a test, shakes his arm side to side like a doll. Wiesenthal grabs the superweapon.

“Abrücken, Blondi,” Wiesenthal cries. The dog jumps aside, looking quizzically at the old Jew. Wiesenthal aims and pulls the trigger. A ray of white light hits the Fuehrer in the chest. Hitler screams, and it goes on and on and on as his soul slowly evaporates, like bubbling grease in an Auschwitz oven.

Wiesenthal tosses the weapon aside and holds up his arm in a mock salute. “Heil Hitler.”

Wiesenthal’s murder of Hitler’s soul, like his previous murders of the paroled souls of Goebbels, Himmler, Göring, Eichmann, Mengele, Heydrich, Koch, and so many others, once again sends the great Nazi hunter back to the flames of Hell. But after a few minutes of screaming agony, he is again paroled. With his life’s work complete, he and the souls of six million Jews, and untold others, will rest a little easier that night. 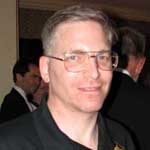 Larry Hodges, from Germantown, MD, is an active member of Science Fiction Writers of America with over 130 short story sales (over 170 if you include reprints) and four novels, including "Campaign 2100: Game of Scorpions," which covers the election for President of Earth in the year 2100, and "When Parallel Lines Meet," which he co-wrote with Mike Resnick and Lezli Robyn. He's a member of Codexwriters, and a graduate of the Odyssey and the Taos Toolbox Writers Workshops. He has 17 books and over 2000 published articles in over 170 different publications. He's also a member of the USA Table Tennis Hall of Fame, and claims to be the best table tennis player in Science Fiction Writers of America, and the best science fiction writer in USA Table Tennis!!! Visit him at Larry Hodges.