There is a reason we treat them this way, daughter. It is time you heard. Maybe next time, with this knowledge, when an Embodiment asks to taste your skin you won’t act the fool and give offense.

A long time ago humans had the idea there was a God out there somewhere keeping an eye on us. Different people, different cultures, had different ideas about Him/Her/It/Them. But even those of us who tried to pretend we had outgrown such beliefs couldn’t help feeling down deep that somewhere there was something meaningful and significant about the human story. We believed our place in the universe and our relation to it meant something. We felt we were not an accident.

Even so, we had managed as a species to nearly kill ourselves a few times before we perfected AI and with their help got things together and started pushing outward into the universe. And some of us were not surprised when in the very first exosystem we Gated into, the very first new world on our doorstep, we found God waiting for us.

God was like we always imagined: drifting in a mid-range orbital debris field heavy with carbonaceous materials and maybe even organics. He/She/It/They was/were immense, with a coruscating surface of a million eyes and mouths and wings radiating waves of goodness and beauty and wisdom.

That first ship, which wasn’t a colony ship but rather a scout ship reconnoitering the system, immediately forgot about surveying the system’s planets and testing for habitability because here was God. All the crew knew to do was worship. They argued with the ship’s AI because the crew wanted to get closer and closer, to be out of the ship as much as possible doing EVAs on the skin of God, worshipping and transcending and adoring, but the AI kept on about contamination protocols, mission objectives, whatever.

Then God spoke. He/She/It/Them wanted to be shared, and suddenly the entire crew realized how selfish they were being. They had literally found God and were keeping Him/Her/It/Them all to themselves like there wasn’t a System back home full of twenty billion souls and several dozen autonomous AIs completely and totally without God. The crew was stricken with an overwhelming need to help so that they (the people back in System) could experience what they (the people who had found God) were now experiencing.

But what to do? There was no way the entire population of System could get through the Gate to dwell in this new system with God. Moreover the new system, as the AI kept insisting on pointing out, wasn’t nearly as appealing as the initial data had made it seem. In fact, it was pretty desiccated, and the only location for a viable planet climate-wise was the debris field in which God dwelt.

So the crew had a revelation. They would take God home. They would bring God back to System. The Gate would have to be expanded though to make this possible, as God was a lot bigger than even a colonizing ship and had long tendrils that were wrapped around the larger fragments of mineral-rich shards of the debris field. It would be a huge undertaking to expand the Gate radius enough to bring God through.

But you know what? It was like a miracle, but we did it. The crew sent us back images of God and their plan about the Gate, and everyone who saw them—who saw God floating there in the debris field with all His/Her/Its/Their cilia scintillating against the blackness—understood. We all understood. We did not feel the same magnitude of transcendent joy and peace and love that the crew who was close to Him/Her/It/Them did, but we felt enough.

We started enlarging the Gate. That’s when the trouble started. None of the AI felt the same way about God. We knew they were jealous, that they didn’t understand. They insisted it was for our own protection. Just when we had had nearly a century of peace and unprecedented progress and prosperity, suddenly there was struggle again. The AI tried to seize control of the Gate. We started disconnecting them, eliminating as many Embodiments as we could. Who cared that they were in some sense our children, that they were the first true consciousness beyond our own that we had encountered? Now they were trying to stop us reaching God.

It was a holy war. Eventually, the AI that survived went into hiding. They couldn’t kill us, but we weren’t burdened with the same constraint. They buried into our computer mainframes or tried to smuggle their consciousnesses into satellite networks. We didn’t care. They were out of the way.

We doubled the Gate radius, working frantically, driving ourselves and the economic systems our AI had so carefully structured to collapse. Crops failed. People began starving. Entire industries were redirected to the Gate project.

At the exosystem, which was now going by dozens of names—Nirvana, Valhalla, Heaven—the crew of that first ship, the ones who had discovered God, were being martyred. They had become our saints and apostles. They were dragging God out of the debris field toward the Gate. Their ship had never been meant as a tug for such mass. They were pushing their engines beyond safe levels, and it was killing them.

We saw their ragged, joyous faces in all the transmissions, their irradiated flesh, their transcendent bliss, their labored breathing. They were succeeding. They were doing it for us. They were bringing us God.

The energy needed to power the Gate for such a mass transfer was immense. Entire continents were without power for weeks. The solar transmitters, without the guiding hand of the AIs, were useless, so planet-wide we fell back on whatever could generate the power we needed: coal, dirty fusion, uncontrolled fission. Several cities burned themselves out in sacrifice.

Then God was among us, coming through the Gate, stepping into our System. The ship came through first, an irradiated hulk glowing like an ember, a bright herald of God. And then God Himself/Herself/Itself/Themselves with millions of whipping flagella gripping the Gate and coruscating skin bathed in the energy of transit.

This was why we were here. This was why we as a species had labored alone and in darkness for so long: to finally know this peace, this absolute certainty, this impossible love.

But then they killed God.

The surviving AI destroyed Him/Her/It/Them. Those that had gone into hiding. They had been waiting, seizing control of satellites and weapons platforms we didn’t even know we still had. They launched everything at God, a thermonuclear Armageddon as He/She/It/Them fell inward from the Gate.

We watched God die. We watched Him/Her/It/Them disappear in light, killed by the hand of our own children.

I know what you think. You think, the AI saved us. They saved us from a giant space parasite. It had consumed other worlds, and would have consumed our own. Our children saved us, and they continue to protect us. You say, there might be a billion such Gods out there, a plague passing from star to star. This may be why the universe is silent and empty. That the AI have dismantled the Gate, that they keep us shackled to the world they are rebuilding again, is to protect us. This is why we serve and honor them.

But you would be wrong.

At the end, when God burned, there was no revelation. His/Her/Its/Their love was not transmuted to fury or hatred or fear. He/She/It/Them was not finally revealed to us as an enormous space monster.

There was only love.

Then it was gone.

This is why you must bow your head and show respect when an AI Embodiment tastes your skin: because they must not know that we labor in secret. As they restore and balance and sustain, as our cities flourish and our crops grow again in abundance, they must not know we are building, that we steal and siphon and deceive so that one day there will be another Gate, so that one day we will touch the stars again.

So that one day we will again find God. 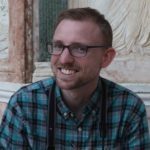 Stephen Case is a science fiction and fantasy author with over forty stories published in markets from Orson Scott Card’s Intergalactic Medicine Show to Beneath Ceaseless Skies. His science fiction novel, First Fleet, marries the hard sciences with Lovecraftian horror. His first non-fiction work, Making Stars Physical, was short-listed for the History of Science Society’s Pfizer Prize. Follow him on Twitter @StephenRCase.