First thing I hear overcomms is the new bob sicking his filter. He clears it, crouching, the boys moan and groan in chorus. I’m quiet. We’re awkward in our marshmallow suits,

“Almost shat myself first time I saw the hole.” I say, “Gravity goes titsup and-”

His speaking strikes me. Got schooling, only trying to sound spacejunk.

Get to working and the scaff takes my weak a-grav weight. Lean into the thread of cable til it’s only dark in the square of my mask, just me and the hole and smell of plasty black superfine dust. I got no fear looking updown into the soft black where the silver net of the scaff and the lights of the other crews fade. No nothing.

Offday. Message from home. Quarterly’s gone through. Should keep the lights on another month. Pen looks worn out onscreen and I want to tell her, rest, but it’s no rest with a kid like Mags. Constant care, that’s what the social said. Had it writ down her clipboard and all. Mags onscreen looks clean and happy, though, hair in two little braids, each fingernail done a different color, seven bright shades I ain’t seen in years. Where I’m standing colors like them might as well not be real. I’m squeezed up inside with love, guts strungout stretched all the lightyears back to them.

Needsmust say something back, show I got the message. But I got no idea what. What does Mags like? She know or care or want to know what I do? Don’t even know how much she understands; ain’t seen her evals in a while. I blow my nose, show her my snot’s black now, onaccount of the superfine. Hope it makes her laugh.

New bob Sam’s got a paper cup but ain’t drinking yet.

“Salute,” I say. Sam makes a face at the taste. He’s so young. We get talking. He’s got a poor fam, saving for a cert. Tell him about Mags. Sam gives me that look I know well, pitylike, says “Must be hard.”

“Still, you must miss them.” His spacejunk’s slipping, and I smile.

Our eyes meet then part. I don’t feel nothing. Can’t tell if I want something from him. We’re quiet in the shouting laughing crowd, boose melting our paper cups. I’m split: most of me is dirtside, with Mags and Pen. I think about Moon, hollow now, nothing left to give. I’ve been here with the rest of them, taking from it, nine years now. And for nine years it’s taken the same again from me.

“Love,” it’s Pen. Yesterday, not a month ago. I know onaccount of the calendar hind her on the wall. All stuck with Mags’ colored stars, green for cleaning her room, blue for 10 on an eval, yellow a day without a tantrum.

“I only got a couple secs. It’s Mags, she’s had an accident.” I’m leaning over blackness, hearing her words like from far away, no ground underfoot. Pen wipes her eyes, “one of her dumbshit classmates tried to–” message stalls, bufferwheel turning. And turning. And turning. I want to smash my tablet, stamp it into superfine. Instead I wait.

I ain’t slept, ain’t et. Message never loaded. What’s happened to my baby girl? Black crust in my undereyes, superfine seeping out in my tears. Get comms to download it direct aftershift today. Now, though, I got to work. Go through the motions, check filters check cables check scaff contact go.

Time drags. Let my hands move where they want. Hoped work would take my mind off it but my brain’s stuck on Mags and Pen so I don’t feel it at first, the shift. Grav’s gone weird. Something slips, the scaff rucks against rockwall, sparks scree offit and superfine puffs outin the air.

Sam, new bob Sam, got the shit spot, cablend down next me. Ain’t holding on nothing when grav gives and he slips off the scaff in slowmo, arms wheeling. I see his screaming face lit in his mask a sec fore I hear him overcomms. I feel my cable jerk and then I’m floating, nothing under my feet.

I grab the rail fore I flip overit. Got to pull me and Sam upout the hole fore the scaff breaks. But I can’t breathe, can’t see, fingers slipping as Sam’s mass tugs me into the black. More of us fall in harder it is to get us all out. Think what it would mean to let go, for the cable to snap. All the space tween me and Pen and Mags crunches into nothing and they’re right here with me on the screaking scaff and I don’t want to fall in. I want the ground under me again.

Can’t hold the rail much longer with Sam’s weight pulling on me. I mute the comms, cut off Sam’s voice. I won’t hear no one’s voice right now cause I know what I got to do. I can see Sam’s face in his mask. Can see he knows what I’m about to do. I drag my hand down to the cable connecting us, feel the emergency release under my clumsy fingers. I look into Sam’s eyes as I start to pull back the catch. I owe him that much. But I got to see my baby girl again.

This story first appeared in Shoreline of Infinity 2018. 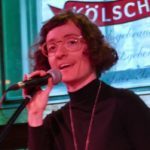 Eris Young is a queer, trans writer of speculative fiction. Their work has appeared in venues including Escape Pod, Shoreline of Infinity and Fusion Fragment, as well as anthologies such as Uncanny Bodies from Luna Press publishing. In 2020 they were awarded a Scottish Book Trust New Writer Award for fiction. Find out more at Eris Young.