Once there was a giant robot.

Every day the giant robot went to work with other robots.  He had to work to get electricity.  But work was hard.

Every night the giant robot came home from work.  A female robot was its mate.  Which means they lived in the same house, shared electricity, and disagreed about things.

One night the giant robot came home low on power.  It wanted to sit in the tranquility room and recharge for a while, maybe download some news feeds, then sit in the back yard.

But the mate robot entered the tranquility room with an angry face pattern.

“You promised to degauss the flux filters today,” she said.

“My promise was contingent on available time and energy.”

“No such contingency was specified!” she howled.

“It was implied,” explained the giant robot.

The mate robot was not pacified by this clarification.  She went rapidly to the sleep chamber and sealed the door.

The giant robot had no choice.  He ratcheted himself to full height, inflated his steel-belted biceps, activated his laser eyes, and turned his face into an angry scowl.

“Come back here!” he demanded.  “You concluded our interaction prematurely.”

“Screw you,” replied the robot mate.

The giant robot spent the night in the back yard, listening to crickets and watching the moonset.

Inside the giant robot was a boy.

A little boy lived inside the giant robot, mostly in the head area which housed a command center with viewing screens, levers, and buttons.  There was also a lumpy garage sale sofa, scattered comic books, and a case of root beer.  Seated within the head, the young boy had complete giant robot control.

One day at work the boss robot said there would be no raise this year for the giant robot due to “lackluster performance”.

The boy saw and heard all this on the view screen’s inside the giant robot’s head.  He swung into action, first pressing a rapid-fire series of facial control buttons.  In response, the giant robot’s face formed an angry scowl and his eyes lit up.

The boy used several levers to ratchet up the giant robot to full height and inflate his metal biceps.  Then he swung breathlessly back to the view screen where the robot boss’ face was on display.

A flicker of hesitation registered on the boss’ face.

Then came the audio.

“Wait, sit back down,” said the boss robot.  “I, uh, wasn’t finished.  Your performance in some areas was good.  Let’s focus on those.  Some pay increase may be possible.”

The giant robot left the boss robot’s office five minutes later with a promise of a raise.  Inside him, the little boy opened a bag of chips and a can of root beer to celebrate.

One crisp fall day he found the gleaming steel body of a giant robot lying amid autumn leaves in the woods.  It was considerably larger than most robots.  It looked dead.

Every day the boy went to the woods and went inside the giant robot.  He taught himself how to work the controls inside its head.  Then he figured out how to reactivate the solar power supply and recharge its batteries.

He brought the giant robot back to life.  He became the giant robot.  After that other robots feared him.  None of them suspected a little boy was operating him from inside.

Sometimes the boy sneaked out.

One night his robot mate argued with the giant robot about electrical consumption.  She went rapidly to the sleep chamber and loudly sealed the door.

The giant robot went to the backyard, leaned against a tree in the shadows, and watched the moonset.  He became very still under the tree, just patches of silver among the leafy shadows.  A watching neighbor would think he’d fallen asleep.

But soon a hatch opened in the giant robot’s back.  A small boy slipped silently out, reaching for the nearest tree branch, and climbed down to the dewy grass below.

The boy quietly wandered the back yard, taking care to stay in the shadows.  He enjoyed the moonset.  He listened to the crickets.  He found two ripe tomatoes in the garden.

One night the boy met a girl.

As was now his habit, the little boy had left the giant robot dozing under a tree to go wandering about his moonlit back yard.

He was in the garden hunting for ripe tomatoes, when he was startled by a sudden movement over by the bean plants.  Something pale shimmered in the darkness like a ghost.

It moved again.  He crept through the vegetables for a closer look.

It was a little girl about his age, wearing a white dress, munching on raw green beans and looking at the moon.

The boy stood up.

The girl dropped a half-eaten bean and stepped away.  She stared at the boy’s moonlit face.  He was like a scarecrow, planted in the middle of the garden to frighten crows and little girls.

“I live near here,” she said vaguely.

She had the panicked look of a trapped rabbit.

Gradually loneliness overcame their shyness.  They talked, they played.  They lay side by side in the yard and looked up at the stars.

A shooting star streaked across the Milky Way.

The girl didn’t answer.  He propped himself up on one elbow to look at her.  She was asleep in the grass.  She was pretty.  She seemed somehow familiar.

On a sudden hunch, the boy got up quietly and walked back to the house.  He opened the back door, went inside, and tiptoed to the sleep room of the female robot.

Her door was unlocked.  He silently opened it six inches and looked inside.  The lights were on.  The mate robot was lying face down on the bed.

The boy almost fled in terror.  But then he noticed something odd.  On the robot’s back, a door hatch stood open.

He crept stealthily into the room, approaching the bed.  The female robot was totally inert.  The door on her back was open, revealing a small ladder leading to her hollow interior.

Crickets hushed as dawn broke in the east. 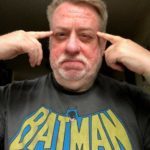