William Vybert Walton wasn’t really stricken with the memory of a younger Daniel Van Dorien. He was not in all honesty, unaffected by the underlying problems created by the new president, when such a strange individual had been taken up by an even stranger Goddess.

He had never thought of himself as a true social critic, never living up to the essential purpose his own father had con­veyed to him in his own way, as a time-honored American pragmatist philosopher. A type of individual that wanted only truth for those he considered essential to the future generation who might complete an extreme quest for self-pruning, the attenuation of those lowest passions.

He was a genius, an entrepreneurial engineer, a truly superb industrialist of enviable aptitude and strenuous risk-taking capital investitures. He was regularly championed as an eccentric titan in the keeping of nascent technological and social revolutions. It seemed a bit odd, as a matter of fact, that the presupposed purpose of the call masked some other undue weight falling upon the commander in chief. At least he was sure it wasn’t straight-up mockery.

The meaning of such a sequence of events leading to this call was quite clear to him. If he had not found himself mirthfully surprised by that conversation with Daniel that uneventful afternoon in the autumn of 2018, his life would have continued as it had, up until that point, far away from the Capital Beltway marked off by the D.C. limits.

No part of William’s desire for success had ever predicted that he would have been chosen to help the greatest politician in the land, at this very promising attempt at cultural re-education. He was certainly, so far shocked and amazed as to why, with all due consideration, it could be demanded of him to remain in the grip of the government’s executive office.

The sitting president had evidently never forgotten the outstanding ability that William’s mind had displayed so easily when they were younger, during their attendance of the same experimental school, together for a few years in the nineteen-seventies in Boston. Their destinies had separated them on their appointed cosmopolitan journeys throughout affluent American society. Daniel had recalled, before contacting William, how precisely his more introverted classmate had always spoken when prompted by his father, reasoning about everything he had an idea to focus on during class, as teenagers, constantly eliciting involuntary nods from his fellow students who were intimidated by him.

William could not put together, from his side of the equation, exactly what he had done that left such a necessary impression on Daniel. But he was sure that it had been over-the-top technical wizardry and doodad skills, that had made it so for him to receive this call, years later.

He didn’t know why this would matter to the president, since politics required no technology to function as it had done since antiquity. For just about every ordinary person accustomed to working with the latest tech, William Vybert was the greatest American pioneer of the new millennium. And although he had never been lauded for any theoretical discoveries or artistic achievements—he would never receive a Nobel, nor an Oscar, a Pulitzer, nor even the Presidential Medal of Freedom. And he did not give this fact any room to distract him from his business pursuits.

His only preoccupation was producing state-of-the-art technology in the projects he ventured into. He designed his products so that they were used by everyone who could afford them. His customers had adapted their ways to the different capacities of his devices meant to produce, modify, and analyze data with varied digital gadgetry and networking interfaces, seamlessly integrated with all forms of everyday chores. And for this, William was celebrated as a demigod that had conquered the innate failings of the human body and brain, twisting its substance into the shape of the human will.

William was not a close friend nor business associate of the president’s. Daniel was only a former classmate whom he thought might use his help at this very difficult time. He stood attempting to bear the new political administration’s moral hazards by leading a detachment of worthy loyalists with a specific goal in mind.

Both future scions had been handpicked candidates who had met at a special class that William’s father had put into operation. A project that strove to bring people from all sorts of different cultural identities in one classroom. William’s father’s advanced educational project was dedicated to advanced analytical methods dealing with formative queries relating to philosophical logic, and the relationships between knowledge, empiricism, and applied methods in different areas of theoretical and materials research.

The forty-fifth president was trying to organize a team who would help him reach the secret desires that his enigmatic mind had been goaded to bring into reality. He was touching base with someone important like William to assist him in this regard. Hopefully this sequence of events ought to favor him once more towards a fated and future standpoint he had strongly lusted after, and had in certain moments in his past, attained so readily using willpower alone, to satisfy his impetuous opportunism.

Daniel Van Dorien’s meteoric rise had not been derided by William Vybert himself, in all sincerity, since he had feigned indifference to the man’s distasteful political style that was efficacious to his presidential candidacy. Each one of them had once lived in different parts of Boston, and had known of another only through William’s father, when his utopian teaching philosophies had been tried out on them, thirty or so odd years ago. They had been disciplined in this way to reflect upon the limits and misconceptions arising within humanity’s discovery of the laws that are expressed by a complex consciousness.

Daniel paused in silence, to rest for a few minutes, and then stopped one of his secretarial aides after this brief mental pause, to inform him that he was clearing his schedule today and tomorrow. The afternoon after his Goddess had started pulling on the reins of his addled mind, he was hounded by the dramatic end to the nation’s political trajectory, revealed to him in its entirety while alone with his thoughts.

He would normally leave to play tennis or handball when issues of government came up that weren’t immediately significant to him. “Anything else?” he would frequently say to no one in particular, with his feet already out the door of the Oval Office. However, this time, a far more serious reason than usual had sent him to contact one of his old acquaintances who had become very rich and influential in his own way.

“Hello Bill. I don’t think you’ve ever received a call like this. I need the real can-do spirit here. And I couldn’t think of anyone but you to help me out to this garbage heap. Really there’s no angle out, besides of course, an about-face.”

He had asked for his number and spoke on the telephone to William, a day after meeting the Goddess. And a month or so before firing the entirety of his staff. Daniel was resetting the government from the ground up. William’s chuckling, impertinent, and droll greeting over the phone, took the president aback. He needed Bill now for such a difficult task, but his reply was very insolent, and that was bad news.

“You know, I don’t see any clear way out of it Mr. President. The presidency—I know some have suggested impeachment even, which I hear is an option. You can always step down, and maybe let the VP work?”

William was quite audacious on purpose, because he disliked everything about the president’s undiplomatic worldview of life and government, deep down. The way he had gotten to the presidency, as well as his policy leanings. He experienced a small shiver of excitement in being able to speak to his former classmate with such a curt dismissal of ordinary table manner.

Daniel listened and replied to William, whom he respected as a clear thinker, regardless of what he believed about certain issues that separated them, on a purely personal basis.

“’I’ve been thinking, my presidency has to be something that I can feel comfortable with before I’m going to sleep. Not a sleep like Socrates had at the end of his life. But life itself.’

Daniel paused after William didn’t respond and then he continued, ‘The way he wanted, in the company that inspired him. To die according to the truest essence, the virtuous beliefs he taught. I ask myself, why not?’”

He was declaring those words to William in a pensive and far-reaching tone of voice, which sounded like he was lost and trying to regain his footing, lost within a heap of muddled memories. William silently speculated that there was something weighing the president down, deep inside, that he dearly needed to express to any willing and empathic listeners who had the time to hear him reflect upon his private life.

“’Everything I have ever known is exactly nothing.’ Yes, do you remember your father taught us about this? Don’t we know even less than people think they do? Will we ever understand about things outside of our own teeny-tiny points of view? Please, if you will, meet with me as soon as you can. Goodnight Bill.”

Daniel’s chief of staff had assembled the totality of all of his senior and junior cabinet members, his press corps, as well as his residential and personal staff, and they were told that they would no longer be working at the White House. The president needed a new chief of staff too, but he would fire the one he had now later. William Vybert Walton had agreed to serve in his administration to the fullest of his abilities.

“It’s rarer for me to do something that I didn’t envision when I started. But I will correct my own mistakes. I still have time to do that.”

Walton had subsequently arranged for a motley array of radical academics to then become the president’s new advisors and cabinet ministers. These included philosophers of law, cultural anthropologists, applied ethics theorists, many researchers, and other academics in their respective disciplines to work on his new staff.

They were all at his daily presidential briefings, and were available to him twenty-four-seven, whenever they were needed to help him. They were nicknamed by commentators and journalists fawningly, as the, “commission of magi,” that would “inquire into the nation”. William had personally named them, collegiately and lightheartedly—the ‘Modernity Table’, aligning upon their function and form added to the presidential mélange that Daniel had freshly convened in an official capacity at the White House.

This is an excerpt from The Goddess of the Labyrinth by David Neptentes, 2022. 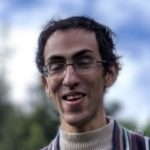 David Nepentes is writer of science fiction, horror, and speculative myths. He has worked as a second language instructor, an English-Spanish medical translator, and handbill passer. Also at times as an aspiring musician, actor, and slam poet, a day laborer, cashier, bagger, and an office worker. Find out more on his website David Nepentes and on his Amazon page.