Let’s sit at this table, Sam.  I’ll fetch our lunches in a bit. No, I can get them. I’m not bad crippled- not like Enid. Okay, I do have an orderly wheel me out onto the porch so I can watch the sunset. Done it since I got here. Love the way the horizon light blazes into my eyes. Tinges everything midnight blue, then leaches into dirty reds and greens as the day dies.

Anyway, like I was saying, I’m on the porch. A chill creeps in with the dark, and, a cat climbs onto the decking. It doesn’t move or hiss, just stares at the dimming radiance with me. Then, when night is birthing, it moves in front of my chair and stares at me.

The shredded ears are visible, a scarred-up Tom. His fur is patches of gray, like storm clouds breaking apart. I recognize the cat, but neither of us moves. Then, a half-second before the orderly opens the door to retrieve me, he springs off the porch and into the shrubs.

The orderly, a Lebanese named Jamal, wheels me back into our room. He stops three feet from my bed. I yell at him when he’d first tries to help me, so now he watches. I set my three-footed cane, heave up, and slide-step over to my bed.

Enid is reading. She always reads, hates television, says it wet-nurses stupidity. And she doesn’t read English. She could, but she reads old books in German and Latin.

Jamal leaves, and Enid shuts a leather-bound book and looks at me. “So, Clara, what did you see out there?”

You know how we don’t look like sisters. I swelled and got heavy when I got older. Enid withered and puckered. Half of me is a whole of her. I turn my head toward her. “Bad sunset. Too cloudy. No green flash.”

“You say to watch out for it. A cat jumps onto the porch, a scruffy grey thing. Just stares and leaves.”

Enid thrusts her hands against the mattress to hold her torso upright, then turns her head to face me. “He’s back.”

Enid sets her book on the nightstand. Then, using her arms, lifts her useless legs around one at a time until she’s full face to me. Her eyes are rheumy shiny. “About time he shows up. I can begin. Clara, I have a task for you.”

“Will it hurt again?”

“Get Sam to do it. He visits in a couple days.”

Enid’s expression darkens. “Sam can’t be involved in doing this.”

“Why not? He’s your husband. It’s his marriage bondage.”

“Don’t test our sisterhood, Clara. Just do it.”

So, listen, you know the chunks of life she and I spend together make me hate her more than any stranger. Enid’s older by three years, older enough to torment me since I’m a toddler. She’s vicious hurtful if I didn’t agree.

“No Goddamn way! It’ll scratch me, and probably has mange and fleas. Ticks too. Besides, Jamal would notice it and take it away from me.”

She already has, I think. Enid gets people to do things, even things they fear. People like me.

“The cat won’t come near enough.” I mutter.

“Oh, yes he will. You remember his name. Brundigeist. When he comes tomorrow, call his name three times softly and reach out both hands. After he jumps up, put him under your lap blanket. Don’t let him nip you-his mouth festers.”

“Brundigeist won’t come to him. He will to you. You’re blood of my blood.”

Enid gets that stare of hers, like she’s not really Enid anymore, and begins moving her hands as if knitting a mourning shawl. I feel the burning hurt, my finger and toe knuckles cracking apart.  I start to scream.  “Stop! Stop! All right, God Damn you, I’ll do it.”

The next evening the cat jumps onto the porch just as I’m close to being sun blind. But I can see him clear with my blue-hazed sight. As if the darkness outlines him. I call out Brundigeist three times, hoping he won’t jump. But he does. I grab hold to put him under the blanket and almost drop him. His bones feel wrong, like they’re loose under his fur, kept close together only by his will. He tries to take a bite, but I grab him by the back of his neck.

Anyway, Sam, she hates you, you know. Like she blames you for getting crippled up, like you did something to her. Oh, she spreads it over with sticky sweetness, but there’s bitter beneath.  I wonder sometimes if things could be different. Never mind. Too old now.

So, I hand her the cat, and she doesn’t even pet it, just sticks it under her sheets. The cat settles between her thighs, and all I see until I go to sleep is the sheets moving slowly, like some kind of animal act. I warn her about pests and scabies, but she doesn’t care.

The next morning Jamal brings in a Sterno can, stand and sauce pot, and Enid has me hobbling around bringing her stuff.  Snippings of your hair and toe nail that she brings from your home, brains from the centerpiece at a pig roast, rat’s blood, all crusty and fermented, plants with no name in English. She pets the cat as she boils and stirs. The cat doesn’t purr, just growls wetly, like its lung is pierced. Enid is whispering things in her other voice. Words I don’t know.

By late afternoon she’s done. The room stinks like rotten meat. She distills everything down to red aspic that she puts in a big vial. Says it’s for what ails you. You, Sam. Then she gives me orders, like she does.

Before I fetch the lunches, let me ask you… You never wonder if it should’ve been me and not Enid? She owns you now, but maybe it’s once different, maybe it’s us two. I think she still hates you, Sam, thinks maybe you hex her into being useless legged.  Tell me what you think.

Oh. You abide by her, so there never is a you and I. No, no, I understand. And you know she potions you into getting healthy? I see. That’s your decision, so I don’t bring it up again. Let me go fetch our lunches.

Here you are Sam, dig in. Yes, I do what Enid says, and put the potion in your meal. Expect it tastes better than the usual cafeteria food. Personal ingredients.   Jamal is watching me to make sure I put it in. It should have tasty bits of you in it.

It does taste odd, but good. Glad to see you have an appetite.

You know, I have to wait nine years for this happening again. Yes, I say again. I’m the one cripples Enid.  No, don’t act like that. It’s too late to stop eating, you may as well finish it up.

So, I help Enid and her infested cat make a batch some years ago. I collect truly rank things so she can end a neighbor.  She gives me the batch and I poison the woman. But I save some of it. The woman dies in four days, with pus-running sores.

Some while later I set up that Enid eats what I saved while she’s with you. Not enough left to kill her, but it cripples her nice. She can’t heal herself because I trap and ship off the cat. And she doesn’t know what I add to the potion.

No! Don’t try and stand, you fall down. See. I tell you. Help me get you back up into the chair. There. Anyways, back then Enid is crippled, the cat is gone and we move here. And you visit once a week.

She blames you for a while. Then she suspects me. But I answer all her questions. What she does while asking, it hurts so bad I black out twice and still got scars. But she thinks I’m loyal blood.

So, you’re getting sick, and Enid wants to make a fix-you-upper. And she does. But I tinker with it. I’m eating what’s meant for you. Sort of. The hair and nails are not yours. They’re mine. Gray hair and yellowed nail clippings look alike, don’t they?

This doesn’t help you, of course. But it helps me. Me who Enid refused to make better. Me who suffers through her abuse and pain. As for you, if you’d told me you want us to be together, I leave you as you are. But you want so much to be with Enid, I decide you should be like Enid. You eat what’s bad for Enid. And you. Too bad.

Sam, screaming at me doesn’t help. No, Enid can’t fix things. She doesn’t have the cat anymore.  This time I cut it up and burn the pieces. Messy. The pieces keep moving around. So, no more potions for Enid. But you get to share the room with her. I transfer already to another home. Never mind which one. And Sam. Do what she says when she moves her hands.

This story previously appeared in Mirrors and Thorns, 2017. 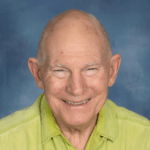 Ed Ahern resumed writing after forty odd years in foreign intelligence and international sales. He’s had over three hundred stories and poems published so far, and six books. Ed works the other side of writing at Bewildering Stories, where he sits on the review board and manages a posse of nine review editors. He’s also lead editor at The Scribes Micro Fiction magazine. Follow him on Twitter, Facebook, and Istagram.