“What about ‘Copper Penny’?” She spread her hands out in front of her like the name was on an old Hollywood marque.

The square-jawed applicant sitting across the desk arched an eyebrow. “Seriously?”

“Sure! Just think of the potential catch phrases. Your arch-nemesis monologues about how you’ve yet again foiled his or her plans and you say, ‘Of course. I’m Copper Penny. I always turn up.’”

She could tell he was tempted. She tried to sweeten the deal. “Plus, copper is very valuable right now.”

“No way! I think it’s very masculine.” She batted her eyelashes a little. Anything to get this guy to settle on a name so she could go to lunch. Copper Penny was a bit of a stretch as far as the rules went, but she was pretty sure it would pass muster because of his natural red hair.

She sighed. They’d been at this all morning and he was no closer to making a decision. Working in the Registry was usually fun. She got to meet the new class of superheroes before they got famous and occasionally, she’d even help one pick a name, which was usually a blast. A few of the more appreciative heroes even kept in touch. She was supposed to have lunch with The Valkyrie Sisters next week.

But every once in a while, she got one of these fellas. No creativity, no initiative, just expected to have the work done for them. Pretty bad traits for a superhero in her opinion.

He leaned back in his chair. “Can you go over the rules one more time?”

It was the third time he’d asked, and she was tempted to shove her coffee cup down his throat, but the agency had been pushing customer service lately. “These are tomorrow’s superheroes,” the memo said. “We need to establish a strong working relationship from day one.”

So, she smiled, brushed her curly blond hair aside, and explained again. “Your name has to have something to do with your superpower and/or your look. But, you can only base your name off the latter if you already have a look established, not the other way around.”

“But why? Why can’t I pick a name and then build a look around it?”

She shrugged. “Honestly, it doesn’t come up that often. Most heroes base their costume off something pretty significant like a traumatic childhood memory or the blanket their foster parents found them in. And of course, many heroes are actually green or blue or made out of rock or whatever, so that’s easy.”

“Right. So, we have to pick a name based on your powers. Now, your fists turn into metal, right?”

She resisted the urge to roll her eyes. “Right. And your forearms. Is that it?”

“What do you mean, ‘Is that it’?” He stood, rolling up his sleeves to show off his shiny metallic appendages. “I can crush cinder blocks with these things.”

“Of course,” she said with a smile. “They’re very impressive.”

He sat down, apparently placated.

“Let’s use that. What else smashes cinder blocks?”

His eyes lit up. “The Sledge Hammer!”

“Are your fists actually iron?”

“I’m not sure. Still waiting on the lab results.”

“Well, we don’t want to register you as iron if they turn out to be tin or aluminum, do we?”

He looked at his hands. “I don’t think they’re aluminum.”

She clicked away at her keyboard. “What about ‘Hard Hand’?”

“Excellent!” She quickly entered the appropriate information into the database before he could change his mind.

“Talk about catch phrases!” he rambled excitedly. He stood and pantomimed shaking someone’s hand. “No worries officer, I’m always happy to lend a hand.” He punched an invisible assailant. “Sorry, I guess I was a little heavy handed.” He thrust his chest out, hands on his hips. “No criminal can outrun the long hand of the law.”

“Nothing.” She hit the enter button and the successful registration confirmation message flashed on the screen. “Congratulations Hand, you are now a registered superhero. I will forward your information to one of our case managers and they will contact you within 72 hours to discuss training opportunities and duty assignments.”

“Wait, aren’t you gonna help me with my look?”

She handed him a fistful of colorful pamphlets she had at the ready. “There are dozens of costume consultants that can craft you the perfect super-ensemble.”

“Ok.” He sat looking at her for a long moment. “Ok, well thanks for your help. If you ever need a superhero, look me up.”

She waited a full five count after he left, then scurried for the break room. They had a running over-under board for what superheroes would make it past their first year and she wanted to be the first to lay money on under for The Hand.

This story first appeared in Diabolical Plots in July 2015. 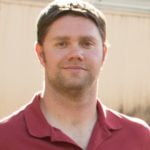 Adam Gaylord (he/him) lives in Colorado with a wife who is smarter than him, two monster children, and a cranky mutt dog. When not at work as an ecologist, he’s usually writing, baking, drawing comics, or some combination thereof. Look him up on GoodReads or find him on Twitter at @AuthorGaylord.