The Talecrafter regarded his apprentice solemnly. “In the three years since you came to me, you’ve learned everything I have to teach you about constructing tales,” he said. “From Once Upon a Time to Happily Ever After, and all the complications in between. I believe you’re ready for the next step. It’s time for you to build your own tale, without my aid.”

The apprentice gulped. “Are you sure?” she asked. “What if…” There was no need to finish that question. Part of her education had thoroughly covered the myriad ways in which a Talecrafter could fail, and the horrible repercussions which ranged from being sucked into the story as an unaware participant, to a painful death from narrative backlash. The wrong choice, a moment of indecision, a lack of focus could cost her dearly.

“Put aside your doubts,” said the Talecrafter. “I have faith in you.” He gestured at the space around them, the workroom with its shelves and cabinets and drawers filled with everything needed to construct the tales. “You may begin.”

Now the apprentice was on her own. She took a moment to gather her breath and her thoughts before turning her wheelchair around to aim for the nearest set of shelves. When she’d begun her apprenticeship, the Talecrafter had ensured that everything would be accessible and within her reach, a consideration she appreciated all the more now that she was on her own and couldn’t even ask for help retrieving ingredients.

“Once upon a time,” the apprentice whispered, selecting a jar of emerald-green dust and scooping a spoonful into a pristine wooden bowl already sitting on the nearby counter.

“There was a… princess,” she said, slightly louder, dropping a small shining diamond into the bowl. As the elements combined, they shimmered, the magic of the talecraft responding to her invocation.

“A dragon.” She confidently added an iridescent scale to the mixture. So long as she held the story’s vision in her head, understood each element thoroughly, there was no need to recite every word. She was constructing a seed which would fly forth into the world and grow into its full potential based on its environment. Princesses and dragons came in many forms, after all.

Next, the apprentice wheeled over to a drawer, pulling out a silver box. “A talking cat for a companion,” she said, retrieving several long whiskers. “Helpful but capricious.” She frowned thoughtfully. “I’ll need a hero… a prince? Another princess? I…no, I’ll come back to this one.”  The Talecrafter’s eyebrows arched as the apprentice skipped over that most important of decisions. His fingers twitched ever so lightly, lips parted as if to speak, but he maintained his silence.

The whiskers joined the other ingredients, the glow intensifying. “A curse. Of what? Transformation.” The apprentice used silver tongs to drop a sickly green mushroom into the bowl. Backing up, she paused in the center of the room to collect her thoughts, while the components flickered with an eerie green color, the mushroom’s addition setting off something new and volatile. It served as a warning to the apprentice that once started, a tale needed to be completed, and quickly. Curses had a way of breaking free if left unattended. “It needs a complication. The rule of three works well here. Monsters? No… I already have a dragon. What pairs well– Riddles? Yes!” Three leaves—oak, maple, rowan. The room took on a woodsy smell. Shadows flickered against the walls—a dragon’s wings beating soundlessly. “A duration. Seven years? Too long. Seven turns of the moon,” breathed the apprentice. Another trip across the room. Seven sprinkles of golden sand taken from an antique hourglass, each one throwing off a flurry of sparks.

“The hero,” she said, coming to a halt. “Why is this so hard? Anyone can be a hero. A… tailor? A blacksmith? A soldier?” She glanced to the Talecrafter, whose still expression proved unhelpful. There would be no hints or warnings there. The apprentice frowned. “A scholar!” she decided. “Someone clever and thoughtful. A story resolved with wits, not wounds.” She added a square of parchment to the bowl, the contents blazing with golden light. She was almost done. All she needed was her conclusion.

“Something’s missing,” she said. The elements roiled and churned, the story growing unstable in its open-ended state. The transformation curse teased through the boundaries, reaching towards her with a sickly green tendril. From his vantage point, the Talecrafter tensed.

“One more thing,” she whispered. She tore a scrap of fabric from her wheelchair and bound it in several long dark strands of her hair, before extending the bundle towards the bowl. “A hero like me.”

“They will have a difficult time of it,” said the Talecrafter, startled into breaking his silence. “Near-impossible, perhaps. The story will not be gentle, nor kind.”

“But at least they’ll have the opportunity,” replied the apprentice, her expression determined, her voice confident. “All the stories we’ve studied, and I’ve never seen myself. It’s time to change that.”

Slowly, the Talecrafter nodded. “Of course. This is your story. Your choice.”

The apprentice smiled with satisfaction and dropped her bundle into the bowl, which sparked fiercely as it absorbed the new element, the curse foiled in its attempt to escape. There was only one thing left at this point. The apprentice glanced to her mentor, who merely nodded. From a glass cabinet, she extracted a shimmering silver cloth bookmark. “And they lived happily ever after,” she announced, throwing it in. The bowl’s contents flared like the sun, blinding them both momentarily before vanishing altogether as the story slipped free into the world to become something rich, strange, and joyful. In its wake, they could both hear the whisper on the wind.

Once upon a time… 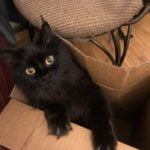 Michael M. Jones lives in southwest Virginia with too many books, just enough cats, and a wife who keeps track of all his stupid ideas. His work has appeared in Constellary Tales, Mad Scientist Journal, and G is for Ghost. He is the editor of Scheherazade's Facade and Schoolbooks & Sorcery. For more, visit him at MichaelMJones.com.