It sat on the shelf behind a T-Rex action figure and a feminist coffee mug with the saying “If they can put a man on the moon, why not all of them?”

Finding a laptop in Mr. Chapa’s secondhand shop was like discovering an Apple watch on an Egyptian mummy. Vern latched on to it immediately. It was the size of an IBM Thinkpad, yet felt incredibly light. It carried no manufacturer’s markings.

He had come to this place of discarded treasures to find a gift for his girlfriend. The occasion was the first anniversary of their life together. The laptop, however, had brought out the geek in him. He felt guilty about buying it, but eased his conscience by picking up the mug for Elena.

Vern carried his finds to the shop-owner’s desk. “Ah… Excuse me, Mr. Chapa. I’m wondering if this laptop works, and how much you want for it. It isn’t marked.”

Mr. Chapa looked up from his jigsaw puzzle. “If it works? Who knows. You found it where?… Never mind. Twenty dollars.”

Smiling, Vern handed Mr. Chapa a twenty, plus another dollar for the mug, and headed out the door into the brisk, morning air.

The next time Mr. Chapa looked up it was to the sound of heavy breathing, as if someone were rushing to get somewhere. A most unusual customer stood before him. The man’s features seemed exaggerated, yet were indistinctive. He could just as easily been in his twenties as in his fifties. His black hair, perfectly parted to one side, lay flat against his head as though painted on. He was smartly dressed in beltless, black slacks and a long-sleeved blue shirt with no buttons.

“The computer… where is it? I must have it!” The man’s lips moved as he spoke, but he exposed no teeth.

“Computers! I have no computers,” Mr. Chapa said. “My only one I sold this morning.”

Mr. Chapa pointed out the window. “It is surely none of your business, but to the young man who rents that house across the street.”

The strange man turned and raced awkwardly to the door.

Mr. Chapa shook his head. “You would think it a matter of life or death this computer,” he muttered.

Elena poured the fresh-brewed coffee into her mug. “I hope you didn’t spend all of next month’s rent money on this fine present,” she called out.

Vern called back from the next room. “Lena, come here. Looks like this baby works. It’s firing up.”

Elena carried her coffee to the living room where Vern’s newfound laptop was just coming to life on his desk. The screen lit a soft red. The dark outline of a circle formed with an arrow protruding from the two o’clock position.

“What kind of operating system is that? Looks like the symbol for a male,” she said.

“Yeah, it’s also the alchemical symbol for the planet Mars.”

“Looks like the machine’s pretty clean except for this,” Vern said. He clicked open the folder. A list of individual files appeared, each with first and last names.

Just then they heard a pounding. Elena looked toward the front door. “What the…”

The pounding grew louder and more frantic. Vern right-clicked on the folder and hit delete, then quickly rose from his chair to investigate the clamor.

By the time he reached the door, the pounding had stopped. He looked out. The street was empty. 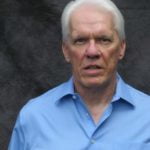