I should know what to call these trees. I’m . . . I’m what? I work with plants, used to work with plants. Didn’t I? Why don’t I know who I am? He sat on a sun-warmed rock at the side of the trail and took a bite of the fruit. He savored each mouthful, and the troubling thoughts drifted away. What a beautiful place. The trail wound more or less down the center of the thickly wooded valley. Sparkling streams tumbled down the sheer, snow-topped cliffs about five miles away to either side of him. What had he been worried about a few minutes ago?

His mind was quiet, not empty; he knew some things. He knew he was a man. He knew the moons were much higher than the unclimbable cliffs. He could see that his grey shirt was stained from the fruit he ate for every meal. There was a patch with complicated markings on his chest that should mean something to him. Writing, I think that’s called writing. He knew this fruit was delicious and that he was eager to continue down the trail.

He stood and followed the sound of flowing water into the forest. As he knelt and drank from the icy creek, the jitter of light through the leaves soothed something in an ancient part of his brain. His inclination to rest in the shade was pushed aside by a restless need to move. He washed his face and scrubbed out his beard. Has that always been there?

Back on the trail, he walked until the sun set in a chaos of red and gold. He watched the light show fade while a breeze gathered strength over the still waters of his thoughts, threatening whitecaps. He was hungry. He picked fruit for dinner and sat beneath the tree. As he ate, the mental winds stilled. A good day, I really covered some distance. Why that constituted a good day was unknown and unimportant. Belly full, he heaped dry leaves for a mattress and settled for the night. First one moon and then the other rose over the trees before he fell asleep.

He woke from confusing dreams of faces and enclosed spaces to a loud buzzing sound overhead and shrank back into the trees. The small, dark object flew down the trail in the direction he’d come from. Another one, what could they be? His need to hide from it was obvious and urgent. When he was sure it was gone, he ate breakfast then set out on the trail.

Walk, eat, walk, eat, sleep, eat, walk. Another day, and another, and another. A soothing and fulfilling routine. The trail provided him with sustenance, comfort, and purpose. A good life.

One morning, with the sun warm on his back, he approached a tight bend in the trail ahead. A rocky outcrop obscured the way beyond.

A woman rounded the bend. She stopped, stood wide-eyed and frozen for a moment, then raised her hand in greeting and approached slowly. He returned the gesture and advanced until they stood face to face.

She was dressed like him, but the markings on her chest were different. Her long dark hair was tangled, and her shirt bore the same purple stains as his. I’ve seen that face somewhere…I think I dreamed it. But why is she here? Why am I here? We should be somewhere else, doing something else. Right?

She shook her head as if to clear her vision then looked into his eyes for a couple of heartbeats. The sun was in her face, beads of sweat forming on her forehead. She smiled and extended her hand. “Hi.”

He jerked a half step back. Then his hand rose, reflexively, and grasped hers. A familiar gesture, something he’d done many times, but . . . “Hi,” he replied.

“I was hoping you could help me with that. I feel like we should know each other.”

He shifted his weight from foot to foot, swaying slightly. A bead of sweat traveled the length of his back. Looking down, he noticed their hands were still clasped. Thoughts teased the edge of awareness, refusing to enter. The more he felt the itch of the almost remembered, the more uneasy he became. And the hungrier.

He started at a buzzing sound in the distance, let go of her hand, and dove for the trees. She hesitated for an instant, then followed. Together, they peered up through the leaves as the dark object passed overhead. When it was gone, its noise fading into the distance, they rose and returned to the trail.

“Do you know what they are?” she asked.

“Me too, but I just had an urge to stand in the middle of the trail and wave at it. Crazy.”

“Is it?” He was dizzy, the ground beneath him unsteady. He frowned, tried to concentrate. That thing in the sky and this person should mean something, do mean something. I should eat.

She stared at him, then looked up in the direction the thing had gone.

“This isn’t right,” he said. “I feel unbalanced, like the world is pulling away from me.”

“Something’s happening to me too. It’s . . . disturbing. I was so happy, no, strike that, I was at peace. Now I feel like I’m losing something, regaining . . . something. Hey, are you hungry?”

“Yeah, I really need to eat. Can I pull some fruit for you?”

He studied her as they ate. By the time they were licking the last juice from their fingers, confusion had yielded to contented companionship. He smiled at her, and she returned the favor. They rose and found a nearby creek, drank deep and washed up, then returned to the trail. Holding hands, they admired the mountains and trees.

“It’s so beautiful,” she said.

“It is. But we need to get going.” He moved to continue down the trail but was brought up short by her hand still in his.

“No, this is the way I always walk.” He tugged at her, willing her into motion.

She held her ground. “I can’t go that way. I’ve already been that way.” Her face crumpled in on itself. She closed her eyes, then opened them and pulled back against his insistent tug.

He stopped pulling but retained her hand. I’ve got to get down the trail. Got to, got to, got to.

They looked at each other. A minute passed, then another. She let go of his hand, turned, and continued on her way down the trail.

He watched her walk away, then turned and resumed his own journey. He rounded the bend, and she was gone, forgotten.

Captain Tangara stood on the bridge, hands behind her back, scowling at the planet below. She rolled her shoulders to relieve their tension but maintained the scowl. She’d never lost a crewman before. Dammit, and now two are missing on this freaking rock. What an absurd place, barren except for the forested band around the equator. Looks more engineered than evolved.  Interesting, but not worth the loss of two officers.

“Excuse me, Ma’am, I’ve got the latest report from the search parties.”

Tangara turned to face the crewman, arms folded across her chest. “Let’s have it.”

“Neither party has found any sign of the missing officers. They’ve continued to send out drones in the six hundred mile stretch of valley between the Biologist’s site and the Third Officer’s, as you ordered. No potential landing sites in between have been located, and they’ve discontinued foot patrols, as they feel it’s unlikely they could catch them.”

Tangara cocked her head to one side, “What do you mean ‘avoiding us’?”

“Just that, Captain. It appears to have something to do with the trees. A crewman on the search party was seen to take a bite of the fruit, and then he took off down the trail. They had to tackle him and put him under restraints.”

“Why the hell would he bite into some alien fruit?” And what the hell is up with that trail on a planet with no observable animal life?

“The science team says those trees are pumping out some kind of pheromone. Apparently, that induced him to eat the fruit, and eating the fruit propelled him down the trail. They theorize it’s a seed dispersal strategy and a selective one. Only that crewman and the two officers were affected.”

“Selective, I see.” She really didn’t. Great now we’re dealing with sentient trees. “Thank you, crewman, that will be all.” Damn, damn, damn.

“Marginal for getting us back home, ma’am. If we’re going, we need to be about it.”

“Right.” She took a deep breath and blew it out slowly. “OK, recall the drones, get the search party off that rock and prepare to break orbit. We’ll leave as soon as the shuttle docks. Let’s go home.”

This story previously appeared in Land Beyond the World 8/30/21. 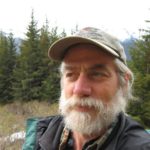 Scott Miller is a writer and artist who lives in a yurt, in a fen, in end-of-the-road Alaska. When not working, he's likely walking. His fiction has appeared in MetaStellar, The Cabinet of Heed, and Land Beyond the world. Check out his art and writings at Wooden Diamonds.