More Black writers and artists are turning to science fiction — and an artistic movement known as Afrofuturism — to tackle issues around race and inequality and give fans an escape from the harsh realities on Earth.

Afrofuturism was long an underground movement. Its roots date back to W.E.B. Du Bois, though its name wasn’t coined til the 1990s. But it has been gaining a bigger mainstream profile in recent years with the blockbuster movie “Black Panther” and the HBO series “Lovecraft Country” and a national racial reckoning.

Black writers, including Sheree Renée Thomas and Nikki Giovanni, next month will release a new anthology called “Black Panther: Tales of Wakanda” — a collection of stories inspired by the first mainstream superhero of African descent. Thomas said the art has gone from being enjoyed by a small number of “blerds” — Black nerds — to wide acceptance because of the questions it’s posing about racism in the future.

Colson Whitehead’s Afrofuturist novel “The Underground Railroad” — a story about a literal underground train system during slavery — won the 2017 Pulitzer Prize for Fiction.

Afrofuturism describes an alternative place for Black people in space or a fantasy setting, or in relation to technology that allows one to escape slavery and discrimination.

Maurice Broaddus, the author of the “Knights of Breton Court” novel trilogy, said Afrofuturism can take an optimistic tone where outer space offers a racial utopia. Or it can envision a dystopian future where racism can’t be shaken, as seen in the 1995 film, “Welcome II the Terrordome.”

“It’s my community giving itself room and permission to dream about possibilities. We’re moving from a space of surviving the day-to-day to imagining the futures we want to see, and then crafting maps and guides and taking steps to create that future…starting now,” Broaddus told Axios.

Writer Victor LaValleattracted attention for his debut 1999 gritting, realistic short story collection, “Slapboxing with Jesus.” LaValle then published fantasy and science novels and has become one of the nation’s top Afrofuturism writers. He recently edited the collection “A People’s Future of the United States.” Black, Latino, and LGBTQIA writers explore the world through a similar Afrofuturism lens.

Afrofuturism also attracted Jesse Holland, who went from writing a nonfiction book about enslaved people who built the Capitol to a novel about Finn, a Black former First Order stormtrooper from Star Wars.

Afrofuturism offers not only entertainment, but old stories in new ways, or new stories in old ways that we have never quite experienced before,” said Thomas, editor of “Dark Matter: A Century of Speculative Fiction from the African Diaspora.”

But there is also fear among some writers that Afrofuturism could be co-opted like all other forms of Black art.

“You can’t just make a TV show and throw Black people on a rocket and call it Afrofuturism. You have to pose questions,” LaValle said.

“No one was going to stop me from writing and no one had to really guide me towards science fiction. It was natural, really, that I would take that interest,” writer Octavia E. Butler once said.

Butler, an African American woman born in Pasadena, Calif., was the first science-fiction writer to receive a MacArthur Fellowship. Her groundbreaking Patternist series covered a secret history from Ancient Egyptian to the far future that involves telepathic mind control.

Jazz musicians Sun Ra, Ornette Coleman, and Miles Davis also explored Afrofuturism through music. Ra starred in the 1974 film, “Space Is the Place,” where he tries to recruit young African Americans in Oakland to join him on another planet.

Superheroes like Superman, Batman, Captain America, and Spider-Man were created by Jewish writers who saw themselves in their creations, and as a way to fight discrimination,

Latino artists have since embraced Superman and playfully call him the first “illegal alien” who lives among Americans undetected and in the shadows.

Black writers are set to announce this year Afrofuturist projects around gaming and virtual reality.

This articles was reprinted with permission from Axios. 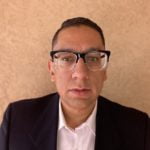 Russell Contreras is the justice and race reporter at Axios covering the policies and agencies at the heart of the administration of justice and how it impacts people of color. See all his stories here.