Last month, Facebook announced it had changed its name to Meta Platforms Inc., in an effort to rebrand itself as a metaverse company. It also announced it would be hiring 10,000 engineers in the EU to help them build it.

However, there are plenty of platforms that already refer to themselves as “the metaverse,” and plenty of others arguing about what the metaverse will be and should be.

Here are some of the major contributors to the metaverse and how they understand it. 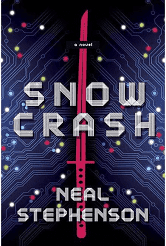 Neal Stephenson first coined the term metaverse in his 1992 science fiction novel Snow Crash. The story takes place in a future Los Angeles after a global economic catastrophe decimated the United States government, splitting the country into a bunch of regions lead by corporations.

Stephenson’s metaverse is a massive multi-player game, comprised of augmented reality, virtual reality, and the internet, which are all connected and privately owned. Through this metaverse, a villain tries to plant a virus that can give him control over others.

In a Facebook video last month, Meta Platforms CEO Mark Zuckerberg described his vision for the metaverse as a 3-dimensional version of the internet that can “deliver a deep feeling of presence” where all the virtual worlds are connected and that users’ goods and information will be compatible with all worlds regardless of who owns each one, whether it be Meta, Microsoft, or Epic Games, for example.

Some essential elements of his vision include virtual reality, augmented reality, and creators. Users can enter the metaverse through VR headsets, AR glasses, and other existing devices.

He views it as “the successor to the mobile internet,” saying that within it, users will be able to work, play, shop, and visit friends and family. Digital ownership of goods, enabled now by blockchain NFTs, will also be important in the metaverse — and users will able to bring their NFTs, whether it be a digital bike or a batman costume, with them to all other platforms and domains, regardless of who owns them.

Meta is working on several more projects within the metaverse to create that feeling of presence — new video games, avatars that can realistically express your emotions and facial expressions, and digital renderings of physical environments that can be manipulated in real-time as a user moves objects about.

In an interview with Harvard Business Review, Satya Nadella says the metaverse will emerge gradually as the digital world increasingly enters the physical world and the physical world increasingly enters the digital world. His vision is one that centers on workplace productivity, such as 3D immersive meetings, hologram avatars, and virtual office spaces where coworkers around the web can drop in to socialize.

According to the Washington Post, Nadella said the company was working to build an “enterprise metaverse” and that it was “uniquely positioned” to do this.

NVIDIA embraces the concept of the metaverse as a shared virtual reality very much along the lines of Facebook and Microsoft. Jensen Huang, the NVIDIA CEO, says NVIDIA’s contribution to the metaverse is its omniverse project, which creates and connects digital spaces and simulations of physical infrastructure — the omniverse is already in use by several enterprises.

In Hueng’s interview with Venturebeat, he says that Omniverse simulations are used to train robots and experiment with ways to increase efficiency.

Apple CEO Tim Cook doesn’t like to use buzzwords like metaverse. Many observers still view his company as a leader in the field due to its focus and development on augmented reality products.

Apple is interested in creating increasingly immersive experiences using augmented reality. It has recently introduced new developer tools involving AR, and opened an augmented reality art exhibit in Istanbul. This goal — the increase in immersion and the blending of digital and physical realities — falls exactly in line with others’ efforts to shape the metaverse.

According to Barron’s, Ming Chi Kuo, an influential Apple analyst, expects Apple’s first metaverse hardware, AR glasses, to be ready at the end of 2022.

Others, instead of investing in cryptocurrency, are investing in digital real estate. The highest selling price of a plot of land in Decentraland was over $500,000. The idea is that as more and more people enter the metaverse, the value of these digital spaces will increase.

But is it a good investment?

Sebastien Borget, co-founder of The Sandbox, thinks that the metaverse economy will outgrow the real economy. Ben Nolan, founder of the virtual world Cryptovoxels, disagrees, saying he expects the value of NFTs to collapse.

Vignesh Sundaresan bought a piece of digital artwork for almost $70,000.

Roblox also calls itself a metaverse. It has over 43 million users a day. It allows users to create their own homes and adventures, socialize with one another, and engage in a bartering system using Robux. While creators can still make money off of sales in Roblox, the currency Robux doesn’t have any real-world value.

Roblox also differs from The Sandbox and Decentraland by its deliberate efforts to build the metaverse as envisioned by the giant corporations mentioned above. For example, the tagline for the Roblox podcast says that they discuss how they are shaping the “next iteration of the internet” aka the metaverse.

A recent Roblox blog post says that they view the metaverse as a digital mimicry of real life. Spatial audio, a chat feature that allows users to whisper, lower, and raise their voices depending on their proximity to their interlocutor, is currently in the works.