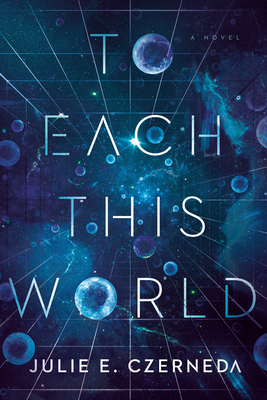 Origin Earth was destroyed 200 years ago in a horrible accident known on New Earth as The Heartbreak. Before The Heartbreak, Origin Earth had sent out half a dozen sleeper ships with small human communities to begin life on other planets. One such sleeper ship settled successfully on New Earth. The community there has since moved on, having no contact with other sleeper ships, assuming that none of the others survived. Instead, the humans of New Earth developed a relationship with a bizarre and mysterious alien partner, the Kmeth.

The Kmeth are large slug-like creatures, with wobbly eyes, scales, and emotions that show on the shape and color of their polyps. They are skittish, distractible, and beastly. They love peanuts. Peanuts are actually a significant weakness of theirs; our heroes use promises of peanuts to manipulate the Kmeth whenever they threaten to get rowdy.

Personally, I loved the Kmeth and was rooting for them from the beginning.

Because Kmeth don’t like change and are easily overwhelmed, the inhabitants of New Earth are only able to communicate with Kmeth via one man, Henry. He’s the “Almighty Arbiter,” the most important official among humans. And he’s a sweet, good guy. A little too sweet for my taste, actually.

The Kmeth have powerful portals that can travel across space in a second. In spite of this technology, the Kmeth are strongly against space exploration and expansion. They limit the humans’ use of their portals.

The relationship between humans and Kmeth suddenly turns sour when New Earth receives a probe from outer space…! One of the long-lost sleeper ships from Origin Earth has sent them a message. Humans are ecstatic but the Kmeth are not, at all. When Arbiter Henry, surrounded by a bunch of media and other officials, attempts to inform the Kmeth about the probe, the Kmeth get skittish and avoid the conversation. Henry wants the help of the Kmeth — and their portals in particular — to go find the other humans.

Soon after learning about the existence of these other humans, something awful happens to them. The humans of New Earth are horrified. In response, the Arbiter decides that he must take the initiative to prevent the same fate from befalling the communities of the other sleeper ships.  Because the Kmeth don’t like to communicate with other humans, Arbiter Henry must lead the mission himself.

Joining him on his adventure are several likable characters. Flip is a sentient construct that is deeply dedicated to Henry so it follows him everywhere. Flip is also valuable as a polymorph, able to make coffee, warm clothes, boots, food, and even transform itself into a flying saucer if need be. Killian is a grumpy forty-something-year-old pilot who acts like a teenager, and Henry requests her service on the mission due to a heroic act of hers. Last, the mission includes a member of the Kmeth race. This beastly character literally makes me laugh. I enjoyed watching Henry, Flip, and Killian maneuver around it. As they continued their mission, hopping from one sleeper ship destination to another, they learn that the Kmeth might not be an ally at all…

Personally, I didn’t enjoy Henry’s character. He was too perfect. Always willing to sacrifice himself for the benefit of others. It was the perfection of his character – and not the Kmeth, their portals, or the concept of there being multiple other Earths – that was difficult for me to believe. What I did believe in and what certainly did satisfy me was how Killian responded to him. She responds to him the way that an average person would to a real goody-two-shoe. I enjoyed that immensely.

As for plot development and devices… I am giving Czerneda half-credit. Here I refer to the tools that an author uses to create feelings of excitement, tension, and meaning for readers. To Each This World did have moments of incredible excitement for me, but there was also a fair bit of “what?” in my reading experience.

A large part of the plot – the main plot, actually – was about understanding the Kmeth and their fears/desires. A satisfying conclusion to such a plot should be one where readers feel like they understand the Kmeth much more. Right? Instead, I don’t really feel like the amount of time that we spent trying to figure them out resulted in enough understanding to satisfy me.

I understand there’s a dangerous balance when an author builds up a non-humanoid species. On the one hand, we have to accept that these aliens aren’t going to make sense to us, but at the same time, the story itself must be couched in humanness because the readers are human.

The first impression I had when I started this book was that I enjoyed the vastness of the tale but I didn’t like the writing style. If you check the reviews on GoodReads, you’ll see that many others agree with me.  On a line level, the writing is challenging to decipher, though I did eventually get used to it.

There is much to get excited about. There are communities of humans spread out to be discovered… and alien races to understand and “work” with! Hanging out on the Kmeth’s portal was also enjoyable. If you enjoy first contact, vast adventures, hard science fiction, a writing style reminiscent of Frank Herbert and C. J. Cherryh, and funny characters, then I highly recommend this book.