As a writer myself, Sanderson continually fills me with both admiration and envy at his myriad accomplishments. But even more is a deep felt gratitude at the work this man has and will continue to do for his readers.

Brandon Sanderson’s recent Kickstarter made me feel the same secondhand pride as seeing a friend make an astonishing achievement.

The current sum of over $26 million speaks not only to Sanderson’s unrivaled work ethic and powerful love of the craft, but to his fans’ unshakeable trust that whatever work he puts out will be worth their time and money.

While there are many Sanderson books I haven’t read — he pumps them out faster than I can read them — I have been a fan of his Cosmere works — a series of novels, graphic novels, and short-stories all set within the same world — Sanderson’s own Marvel universe.

Here are three of those books I would recommend to anyone interested in delving into his work:

This is the first published novel by Sanderson, but he admits to having written thirteen more before this — so he was already an old hand at the craft of writing.

The book follows three protagonists: the exiled prince Raoden, suffering from an arcane ailment and banished to the city of Elantris, his fiancé Sarene, who must maneuver her way through the political sphere of the nation of Arelon following the disappearance of her betrothed, and the priest Gyorn, servant of a warlike empire who attempts to use religious propaganda to subvert the same nation.

This is a book for those readers interested in political thrillers with obvious religious overtones.

Also, it would interest mystery fans, as Raoden must not only survive in the lawless city of Elantris, but has to uncover the secrets behind its fall and before the disease that afflicts all those of the city eventually steals his sanity.

This first book of Sanderson’s is excellent for new readers of his work.

This is a stand-alone tale that follows the plight of two princesses, Vivenna and Siri — the former betrothed to the imperious God King in order to protect the nation of Idrian, the latter sent in her sister’s place to protect her from this fate.

Much like Elantris, this book focuses on the political maneuvers and manipulations of the two sisters.

Siri battles wits with the God King’s advisors, as well as the Returned, a race of gods that serves as the city’s upper echelon. In turn, Vivenna  prowls the city’s underbelly, uncovering plots that could lead to international war.

This book is another solid introduction to Sanderson’s high fantasy world without having to commit to a lengthy series.

Readers might note some of the obvious similarities to his first book- a foreign princess, betrothed to be married, arriving in a city on the brink of war.

But as his eleventh published book, Sanderson comes into this novel a more experienced and polished writer, his prose and characterization both reflecting this. 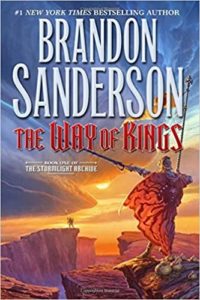 The first book in an epic fantasy series called the Stormlight Archive, The Way of Kings follows the people of the nation of Alethi after the assassination of their monarch Galinar by the Parshendi, a race of powerful yet alien creatures that make their home on the massive plateau known as the Shattered Plains.

The war between the Parshendi and Alethi and the events surrounding it serve as the meeting grounds for many figures — the slave Kaladin conscripted into the war against his will, the warlord Dalinar, whose prophetic visions alienate him from family and friends, and the scholar Shallen — whose studies under her mysterious mentor unearth deeper secrets surrounding the interspecies war.

For fans less interested in political intrigue and drama, and more invested in warfare — this is the book for you.

The perspectives of both Kaladin and Dalinar are heavily embroiled in battle- the former from the position of a foot soldier in the trenches, the latter a seasoned general leading a year-spanning campaign.

Be forewarned that this book is the first in a lengthy series of ten books, each hundreds of thousands of words long, with the final book expected to be released in 2043.

For that reason, despite my love of the series, I would recommend Warbreaker or Elantris as an early Sanderson experience. If none of this daunts you, I could not recommend this series highly enough.

Have you read any of these books? Are there others you would recommend as good places to start? Let us know in the comments!