In the spring of 1970, colleges across the country erupted with student protests in response to the Vietnam War and the National Guard’s shooting of student demonstrators at Kent State University. At the University of Chicago, where Frank Wilczek was an undergraduate, regularly scheduled classes were “improvised and semivoluntary” amid the turmoil, as he recalls.

It was during this turbulent time that Wilczek found unexpected comfort, and a new understanding of the world, in mathematics. He had decided to sit in on a class by physics professor Peter Freund, who, with a zeal “bordering on rapture,” led students through mathematical theories of symmetry and ways in which these theories can predict behaviors in the physical world.

In his new book, “Fundamentals: Ten Keys to Reality,” published today by Penguin Press, Wilczek writes that the lessons were a revelation: “To experience the deep harmony between two different universes — the universe of beautiful ideas and the universe of physical behavior — was for me a kind of spiritual awakening. It became my vocation. I haven’t been disappointed.”

Wilczek, who is the Herman Feshbach Professor of Physics at MIT, has since made groundbreaking contributions to our fundamental understanding of the physical world, for which he has been widely recognized, most notably in 2004 with the Nobel Prize in Physics, which he shared with physicists David Gross and David Politzer. He has also authored several popular science books on physics and the history of science.

In his new book, he distills scientists’ collective understanding of the physical world into 10 broad philosophical themes, using the fundamental theories of physics, from cosmology to quantum mechanics, to reframe ideas of space, time, and our place in the universe.

“People wrestle with what the world is all about,” Wilczek tells MIT News. “They’re not concerned with knowing precisely what Coulomb’s law is, but want to know more about questions like the ancient Greeks asked: What is space? What is time? So in the end, I came up with 10 assertions, at the levels of philosophy but backed up by very concrete facts, to organize what we know.”

Wilczek wrote the bulk of the book earlier this spring, in the midst of another tumultuous time, at the start of a global pandemic. His grandson had been born as Wilczek was laying out the structure for his book, and in the preface, the physicist writes that he watched as the baby began building up a model of the world, based on his observations and interactions with the environment, “with insatiable curiosity and few preconceptions.” 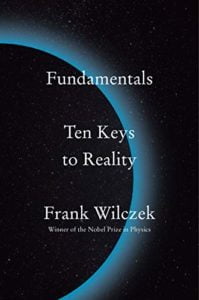 Wilczek says that scientists may take a cue from the way babies learn — by building and pruning more detailed models of the world, with a similar unbiased, open outlook. He can recall times when he felt his own understanding of the world fundamentally shift. The college course on mathematical symmetry was an early instance. More recently, the rise of artificial intelligence and machine learning has prompted him to rethink “what knowledge is, and how it’s acquired.”

He writes: “The process of being born again can be disorienting. But, like a roller- coaster ride, it can also be exhilarating. And it brings this gift: To those who are born again, in the way of science, the world comes to seem fresh, lucid, and wonderfully abundant.”

Wilczek’s book contains ample opportunity for readers to reframe their view of the physical world. For instance, in a chapter entitled “There’s Plenty of Space,” he writes that, while the universe is vast, there is another scale of vastness in ourselves. To illustrate his point, he calculates that there are roughly 10 octillion atoms that make up the human body. That’s about 1 million times the number of stars in the visible universe. The multitudes within and beyond us are not contradictory, he says, but can be explained by the same set of physical rules.

And in fact, the universe, in all its diversity, can be described by a surprisingly few set of rules, collectively known as the Standard Model of Physics, though Wilczek prefers to call it by another name.

“The so-called Standard Model is the culmination of millenia of investigation, allowing us to understand how matter works, very fully,” Wilczek says. “So calling it a model, and standard, is kind of a lost opportunity to really convey to people the magnitude of what’s been achieved by humanity. That’s why I like to call it the ‘Core.’ It’s a central body of understanding that we can build out from.”

Wilczek takes the reader through many of the key experiments, theories, and revelations that physicists have made in building and validating the Standard Model, and its mathematical descriptions of the universe.

Included in this often joyful scientific tour are brief mentions of Wilczek’s own contributions, such as his Nobel-winning work establishing the theory of quantum chromodynamics; his characterization of the axion, a theoretical particle that he named after a laundry detergent by the same name (“It was short, catchy, and would fit in nicely alongside proton, neutron, electron, and pion,” he writes); and his introduction of the anyon — an entirely new kind of particle that is neither a fermion or a boson.

In April, and then separately in July, scientists made the first observations of anyons, nearly 40 years after Wilczek first proposed their existence.

“I was beginning to think it would never happen,” says Wilczek, who was finishing up his book when the discoveries were made public. “When it finally did, it was a beautiful surprise.”

The discovery of anyons opens possibilities for the particles to be used as building blocks for quantum computers, and marks another milestone in our understanding of the universe.

In closing his book, Wilczek writes about “complementarity” — a concept in physics that refers to two seemingly contrasting theories, such as the wave and particle theories of light, that can separately explain the same set of phenomena. He points to many complementary theories of physics throughout the book and extends the idea to philosophy and ways in which accepting contrasting views of the world can help us to expand our experience.

“With progress, we’ve come to consider people and creatures as having intrinsic value and being worthy of profound respect, just like ourselves,” he writes. “When we see ourselves as patterns in matter, it is natural to draw our circle of kinship very wide indeed.”

Reprinted with permission of MIT News.