Chapter 8 – A Farewell to Arms

Dr. Hamilton brought the patient into one of the partially constructed shells of Backside Clinic’s new exam rooms. They’d recently stocked a small white roll-around cabinet with some basic medical supplies, but there was little else in the room to suggest that they were in a clinic. “Sorry, we aren’t furnished completely,” Hamilton said. An understatement; besides the small cabinet, there were two folding chairs in the room that the construction workers had brought in, and a number of woodworking and drywall tools scattered around that the stranger looked at suspiciously. Hamilton saw his eyes dart anxiously to a hand-saw and a drop cloth spread out on the floor. “I can pop next door for medical supplies if we need them,” Hamilton said reassuringly. “What’s your name?” 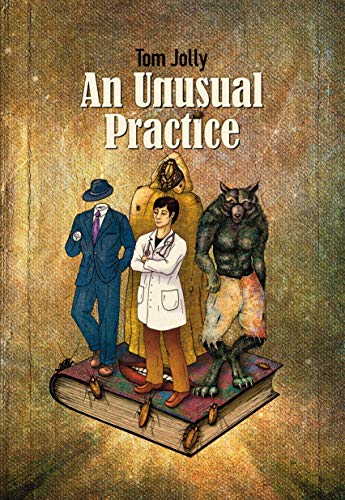 “Muh…my name is Gary Lumley. I—I wasn’t even sure I should come here. First I saw a normal doctor, but he wanted to take me in for observation, and then there were cops he was talking to, so I snuck out. Then I saw an herbal healer and she wouldn’t get near me when she saw the infection, and then she sent me to a—a witch, and she said she’d never seen anything like it and she looked scared, and your name came up. She sent me here and told me to use the back door, so no one would see me go in. Is this like a secret lab?” he asked.

Gary Lumley was sweating like a snowman on a summer day. Nervous, his eyes darting around the room, hands shaking. If Hamilton hadn’t seen so much weirdness in the last few weeks, he would have been nervous himself. “Not very secret, apparently. What are your symptoms?” he asked.

The man pulled up the sleeve of his tee shirt. At the shoulder junction, there was a dark line, and at a break in the line, a dozen small tentacles writhed as though straining to reach the air. Hamilton involuntarily scooted his chair back a few inches. “I see.”

“And look!” the man cried. He pulled up his other sleeve. A similar dark line, minus the writhing tentacles, circumscribed his shoulder joint. “There are lines on my legs, too! What is happening to me?”

Hamilton took a breath, pulled a cotton swab out of a cabinet drawer, and got close enough to poke around the area. The tiny tentacles snatched the swab from his hand and started flailing it around wildly like a crazed conductor’s baton. He grabbed it and carefully pulled it away from them, placing the swap in a sterile plastic baggie. “Nothing like this has ever manifested before, I take it.”

“I don’t think so. I would sure as hell remember if it had.”

“How about family history? Anything you can’t explain? A disappearing relative or something?”

“I’m afraid I don’t have much to go on, there, doctor. A homeless man found me next to a burning house when I was a baby. His name was Robert Lumley, and he sort of raised me until Child Protective Services discovered me. I was five years old then. Robert died just after I turned ten. He had liver failure, I think. He told me once that there were a lot of shouting, angry people around the burning house. That was in Innsmouth, Massachusetts.”

“That’s a long way from California.”

“This is where the jobs are,” Lumley said. “And Innsmouth was a good place to leave.”

“What have you tried to get rid of these, um, tentacles.”

“I tried cutting one, but it hurt like hell. It’s like they’re a part of me,” he whimpered.

“Let me take a look at this sample with a microscope and see what it tells me. Relax, and I’ll be back. If you need something, talk to Agatha out on the loading dock. She can come get me.”

He left the sparsely furnished exam room and headed toward the secret door between clinics. Agatha was reading a magazine, sitting in another folding chair near the loading dock. “If you need my help with anything, just let me know,” she said.

Hamilton nodded his thanks, opened the panel, and stepped into the storage room, passing through to Pembrook Clinic. He headed down the dark hallway to their small lab room. Corwin appeared suddenly next to him, startling him.

“What are you doing over here?” Hamilton growled at him. “I thought you were confined to the other building.”

“It’s kind of all one building, now, for haunting purposes. Another odd case, Dr. Hamilton?”

“They’re all odd. Why can’t supernatural creatures just get colds once in a while?” He entered the lab and sat down at the bench, then swabbed a slide, put a coverslip on it, and placed it under the microscope.

He turned on the light on the microscope, focused it, then memorized the major features of the cell. Looking up from the microscope, he pulled down a reference book and thumbed through it. “Hmm. Fairly normal cells. Kind of a primitive design, like early eukaryotes.” He bookmarked a page in the book, scribbled notes in his personal notebook, then closed it and reached for a book on bacteria and primitive multicellular organisms. After five minutes, he was tapping a page thoughtfully.

“What have you found?” Corwin asked excitedly.

“Sponges. His cells most resemble sponge cells. Some shapechanging characteristics, but all the shapechangers have colonial cell arrangements, so that’s not a surprise.” He was looking at biological characteristics of sponges when a scream of undiluted horror came from the other building. Hamilton dropped his book and ran from the lab, back through the storage room, and nearly crashed into Agatha coming the other direction.

“Your patient is screaming,” she said calmly.

His arm was crawling slowly across the floor, fingernails scratching at the linoleum, the shoulder tentacles trying to crawl the opposite direction, but with no discernable purpose or destination. Hamilton glanced up at the stump of Gary’s shoulder, where a matching group of tentacles wiggled and closed in on each other, blending into a smooth surface that resembled raw muscle. There was no blood coming from the stump. Gary was cringing away from his own crawling arm.

Hamilton watched the arm for a moment in deep thought. The thing was already starting to change shape. It looked like a face was forming in the flesh near the shoulder stump. He wondered what sort of monster it might turn into, then remembered the book he’d just been perusing.

“Augh!” Gary howled. “What is happening to me? He reached down to his upper thigh with his remaining hand and clutched at the tentacles that had suddenly manifested there. Hamilton could see them wiggling under his pants.

Gary was panicking, but Hamilton calmly said, “I think I know what’s going on.”

Gary looked down hopefully at his crawling arm, and said, “You can reattach my arm?”

Hamilton bit his lip and shook his head. “You are budding, like a sponge does. I believe that you’re giving birth.”

Gary reached up with his remaining hand as he felt another tentacle punch through the skin of his other shoulder. Hamilton caught him as he fainted, laying him gently on a drop cloth on the floor.

Agatha was standing at the doorway, watching the bizarre scene. “Yes?”

“Can you sneak over a couple of cribs from the regular clinic’s storage? Maybe some cardboard boxes and towels if we don’t have enough. I think we’ll have quintuplets on our hand here, pretty soon.” He retrieved some scissors out of the cabinet and cut away Gary’s pants, exposing the tentacles forcing their way through the skin at the leg joints. On the crawling arm, the swell of a head began to form. All the hair on Hamilton’s body was standing up and he wanted to run away screaming, but it wasn’t everyday you got to deliver quintuplets. Or quadruplets, depending on whether you counted Gary’s original head and body as a child or the parent.

Two hours later, all the pieces of Gary were distributed in baskets, boxes, and bassinets. The original Gary had regained consciousness, grimacing as much of his own torso mass had redistributed to form tiny legs and tiny arms. His other disconnected limbs were working hard to reshape themselves into baby shapes. “Are you telling me,” Gary asked, “that this is normal for me?” He waved his tiny legs and arms angrily. Quintuplets it is, thought Hamilton.

Hamilton hid a bemused smile behind a hand. “Apparently your cell structure is closer to that of sponges than humans. Sponges reproduce asexually by budding new colonies of cells. Other shapechangers can repurpose cells like this, but reproduce via more conventional methods.”

“It is curious that every generation should have four offspring,” Hamilton said, “so you would think that the world would be overrun with your body type at that rate. But then again, I can also understand a pretty high attrition rate if you were trying to live in a regular human community.”

Gary looked down at his body as well as he could and grunted. “When Robert found me next to the burning house, you think it was my real parent’s house, don’t you? Burned to the ground because of this?”

“Humans react badly to lesser differences than this. Your real father—or mother, as it might be—must have thrown her arm or leg out the window before the attackers burned down the house, hoping you would live. You were lucky that the mob didn’t find you. Even luckier that you’d already reshaped yourself into a baby when Robert Lumley discovered you in the grass.”

“Dad—my human dad—always said I was shaped a little funny when he found me.” Gary looked around at the other cribs around him. “He must have been a real saint.”

“I’ll bet he was. Do you have someplace I can take your, uh, offspring?”

Gary’s face clouded over. “No, I don’t. None of my friends would, uh—” He glanced around at his strange, warped-looking offspring.

“The witch,” Agatha said. “The witch will help him. The one he saw before he came here.” She crossed her arms and leaned against a wall. “Not for free, of course.”

Agatha delivered the ‘children’ to the witch and called Hamilton afterward. He’d already returned to his apartment and was making more notes in his notebook while feasting on a microwaved chicken pot pie.

“The babies are delivered,” she said. “Henrietta seems nice enough. We’re hoping that Gary’s main body will put on weight fast enough to look like a small adult in a few months, once the new arms and legs fill out a little. This is new to Henrietta. She seemed excited.”

“That’s good. My first case in the new clinic, and I didn’t really have to do anything at all but watch.”

“You talked to the poor man and figured out what was going on. You did what you could and helped him. You didn’t burn his house down or chuck him out a window. No one could ask for any more than that.”

Hamilton laughed. “When you put it that way—”

“The clinic will do fine, Matthew Hamilton.”

“So says the Oracle?”

This is an excerpt from a novel An Unusual Practice published in 2019.

Tom Jolly is a retired astronautical/electrical engineer who spends his time writing SF and fantasy, designing board games, and creating obnoxious puzzles. His stories have appeared in Analog SF, Daily Science Fiction, Amazing Stories, MYTHIC, and a few anthologies, including As Told by Things, and Tales from the Pirate’s Cove. His fantasy and SF novels, “An Unusual Practice,” “A Game of Broken Minds,” and “Touched,” are available on Amazon. He lives in Santa Maria, California, with his wife Penny in a place where mountain lions and black bears still visit, especially if you own any chickens. You can discover more of his stories at Tom Jolly and follow him at Twitter or Facebook.