The most valuable commodity in the vacuum? People. Anything else, they’re either manufacturing or towing, but the people are the key.

Central planets sold us this dream of infinite space and a chance to make our own way, conveniently leaving out how our organs would fail under the strain, or how a cheap radiation shield could spawn cancer like mold on bread.

So there’s a market for humans. As laborers, or parts.

A chirp sounded from my console, followed by one of Grey’s favorite alerts: “X marks the spot!”

I was a lot like my ship: mostly metal now, clunky housing keeping a brain alive. But Grey was as excitable as he’d been as a parrot. Fair enough. I was crotchety as I’d been as an old woman.

Rare find. And out of place. Pods weren’t made for long distances and we weren’t close to anything.

“Clear skies!” Meaning no sign of it, intact or otherwise.

That was the risk of cryosleep. Practical for the long ride to a colony or whatever dream destination you’d been sold, but left you vulnerable. Possibly the coyotes decided the payment for delivery of these chumps wasn’t worth the fuel.

Scans showed two dozen pods out there, unmoving. They’d been left at set coordinates. Predators would be coming to claim them.

Grey squawked assent as I climbed aft to take our magnetic forklift out for a ride in the black.

I couldn’t afford a net, so I linked each pod to the forklift’s tail, magna-hitching the potential coffins nose-to-tail. The cryogel in the pods was quality stuff. These people were headed somewhere that considered them of actual value. Otherwise, they’d be in the cheap goo that spikes your organs with frozen crystals. Prime market meat, fresh sealed.

“Run out the long guns!” Grey’s warning rang as scans appeared on the forklift’s dashboard.

I emitted a long whistle, which Grey dutifully mimicked. A predator ship with golden gills had arrived for their payload. Their net deployed for the harvest. I was about to become as unlucky as these pods, with the added insult that I’d done their work for them.

“Stay low, old boy. Don’t fire until they arm. Aim for weapons first.” Grey was no match for this predator’s power, cannons, or engines. They could flick him off the chart by blinking.

I’d tried to keep the command simple, but sometimes a bird brain heard what it heard.

Grey fired. His shot went wide, slowed, and snagged in the predator’s velocity-disrupters.

Their cannonballs punched through his minimal shielding and aluminum-thin hull without slowing. Through the forklift’s window, I watched a cloud of air and personal effects—including my best hat—escape a breach in our hull. Hopefully Grey could keep himself in most of one piece until I got back aboard.

They didn’t bother firing on me. I had no weapons. As booty, I wasn’t worth much—an aging chassis around a headstrong brain and a heart that’d never withstand planetary gravity again. Moreover, I was too close to their precious cargo. They scooped up my forklift, with me in it, along with the string of pods I’d gathered for them. Grey squawked alarms as I stared through the net’s steel cords and tried to imagine my way out of this.

Mist gathered along the overhead of the predator’s cavernous cargo bay. Racks for escape pods, many occupied, stretched in every direction. The net flattened out as it reeled us in. The sliding hatch sealed beneath us in ominous, well-oiled silence.

I took my engineer wand for what good it would do as a weapon, rolled out of the forklift, and found a spot to hide with a view of the door.

Metal drones undocked from the bulkhead. No surprise. Remember what I said about precious humans.

His eager reply came through, and I winced at the volume. “Pretty bird!”

“Very pretty bird.” I ducked around the corner as drones scuttled to move the lifepods into storage. Two of the drones puzzled over my fork lift before securing it to the decking with a magna-tether. “Polly want a cracker?”

A delighted squawk came back. It’d taken a hellish rewire to get the ship’s best tricks to register the way food rewards once did, but it’d been worth it. He’d hack into another ship’s computer at the barest say-so. Like the African Grey he’d once been, he delighted in solving a puzzle and was more than a match for most of them.

The predator proved no different. “Yo ho! Shiver me timbers! Drink up me hearties!”

Meaning we were in, if the drones freezing mid-motion wasn’t enough of a clue. “How many living crew, Grey?”

“One! Two! Buckle my shoe!” Grey ended with a parroted human laugh.

“Lock ‘em in and vent their air, please.”

“Bound in bone and can’t get home!” Too much damage.

“All right, no worries. I’ll clear out the bridge and come to you, pretty bird.”

Nice thing about human trafficking, looking on the bright side, is there’s always half-hearted attempts by governments to control it. Just enough that they’ll pay a ransom to anyone who’ll put forth the effort for them.

Once on the command deck, I secured two unconscious bodies into a locker for the ride back to civilization.

Nice ship, I decided, sliding into an ergonomic gravity seat. Lots of toys for Grey, too. From the look of their manifest, we could afford to transplant his brain over, easy. A payday well worth the inconvenience of being caught like a fish and losing my favorite hat.

I deployed my new net and towed Grey’s mangled hull in from the black. “Welcome aboard, matey. Shall we go get paid?” 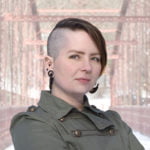