The arresting officer’s name was Johnson, a humorless ogre of a man with a dated mustache. The crime: grand larceny. The act: swiping a souped-up bicycle and joyriding around the streets. The (potential) sentence: a fine and up to one year in custody. Officer Johnson brought Hasan to the police station, where he was processed, taken to a row of chairs, handcuffed to the rail, and told to keep his mouth shut.

When an officer finally came for him, she didn’t bother to introduce herself. She unshackled him and led him down the winding hallways until she stopped at one of the doors, swiped her passcard and shoved Hasan into the largely barren room. The lights turned on automatically. In the middle of the room stood a small desk with a lone chair in front of it.

The officer ordered Hasan to sit and shackled his cuffs to a ring on the desk. Without a word, she left. The room felt clinical. There were cameras in each of the corners. On the desk, a small black contraption, a phone perhaps, but more squat. It resembled the telecommunication devices used in the office drama his father mocked but watched religiously.

Hasan heard footsteps passing through the hallway and shouted towards them. “Can someone tell me what’s going on?”

The machine in front of him came to life. Red lights flashed along its base and a robotic voice sounded from its speakers. “Hasan Ali, you have been charged with grand larceny, which carries a maximum sentence of one year in jail and a $5,000 fine. Do you understand the charge as read to you?”

“Please respond to the question as posed.”

Hasan studied the device carefully. “Yes, I understand, okay, now will you tell me who I’m speaking to?”

“This is a joke, right? Can I speak to someone, you know, human?”

Hasan couldn’t help but laugh. Out of all genres, science-fiction was the one he knew least. His father had no patience for anything that wasn’t grounded in reality, and he himself cared little for the rambling speculations of underpaid TV writers. He thought back to what little his father had taught him. “I want a lawyer.”

“Your request for a lawyer has been duly noted. Current wait time is approximately 72 hours.”

Hasan had watched enough cop shows to know that didn’t sound right. “Three days? Forget that. Just tell me when my court date is, set my bail and let me go.”

“Please confirm if you wish to waive your right to an attorney.”

“Yes, okay. Now will you please tell me what’s going on.”

“Your court session has already begun. I am the Arbitrator 4000.”

“You already said that!”

“Mr. Ali, the State provides the following evidence against you. At 01:45 this morning, you were spotted by Officer Darius Johnson riding a bicycle across two lanes of traffic. The officer flashed his sirens and ordered you over his loudspeaker to pull over. You proceeded to ride the bicycle for another one and a half blocks before stopping.”

“That’s a lie. I stopped right away.”

“Mr. Ali, you will have your chance to cross-examine the witness.”

“What witness? All I’m talking to is a dumb machine!” He slapped the table, causing the chains around his wrist to rattle.

“Further outbursts will land you in contempt of court, is that understood?”

Hasan slunk back in his chair. “Fine, whatever.”

“Once you stopped, you debarked the bicycle and waited for the officer. Officer Johnson exited his vehicle and deemed the bicycle to be much too tall for you.”

“When standing, the officer noted the bicycle seat to be at your chest level. He asked where you acquired it, and you said—”

“None of your damn business.”

“Precisely. Officer Johnson conducted a further examination of the bicycle and noted a name etched into the frame. When asked what name that was, you provided no response.”

“Anyone could have etched a name onto my bike. I chain it up all the time.”

“Mr. Ali, this is your final warning. Your chance to question the State and to provide your own testimony will come. Is that understood?”

“Yes…your honor.” He rolled his eyes.

“Officer Johnson determined he had sufficient cause to detain you. You were placed in restraints while he reported details of the bicycle into his radio. The Investigator 9000 received his message and scanned the log of items recently reported stolen. Said bicycle was located on the list and matched via the name etched onto the bicycle’s frame.”

Hasan shifted in his seat. The Arbitrator 4000 was emotionless, articulate, thorough.

“At this point, Officer Johnson told you the bicycle had been reported as stolen with a listed value of $1,200. He asked if you had any further comments. And you replied—”

“I’ve got nothing to say,” Hasan mouthed along with the machine.

“Officer Johnson then read you your rights and placed you under arrest for the crime of grand larceny, as the value of the stolen item exceeded one thousand dollars.”

“First, the State offers the following video as Exhibit A.” The machine projected a video onto the wall, which showed Hasan riding the stolen bicycle across multiple lanes of traffic. The machine highlighted the exact spot where Hasan was ordered to stop as well as where he finally did stop, listing the distance at 174 meters. The video continued to play. It documented the interrogation, the officer’s call on the radio, and the arrest.

The evidence against him was overwhelming. He thought back to the sassy daytime judge shows, relieved that at least the machine wasn’t berating him for his foolhardy joyriding.

“This concludes the State’s account. Mr. Ali, do you wish to cross-examine the witness?”

The Arbitrator 4000 projected a live feed of Officer Johnson onto the barren white wall. He was no longer in uniform. He stood in front of a sink full of dirty dishes, a sponge in hand, smiling at the camera.

The officer’s account was airtight. Hasan had hoped to plead that the officer had stopped him without due cause, perhaps due to some sort of prejudice, but the video had clearly shown him weaving in and out of traffic. He ran through the countless hours of detective shows in his mind, trying to conjure an angle.

“Mr. Ali, do you wish to cross-examine the witness?”

“I guess not,” he muttered.

“Very well. Mr. Ali, you may present your Defense.”

“First of all, I object to being tried by a machine, I just want to put that out there.”

“And second, the video might show it took me a block and a half to pull over, but I stopped as soon as I heard the officer, I swear on my life. I mean, I guess if you’re not charging me with resisting arrest, it doesn’t really matter, but I want to make sure the record is clear.”

“Your testimony is noted.”

“And the bike, it’s mine, okay. I don’t know why someone etched their name on it or why they reported my bike stolen, but I don’t see why that’s on me to prove.”

Hasan waited for the machine to respond but it remained silent.

“Like, I have a lot of enemies okay. Anyone could have chosen to set me up. I come from a bad home, a bad hood. You know what I’m saying?”

“Your testimony is understood.”

The machine waited precisely twenty seconds before responding. “Mr. Ali, do you wish to add anything further?”

“Please advise if you have anything further to add to your Defense.”

“I wouldn’t know where to begin.”

“Your testimony has been recorded. The State has no questions for the Defendant at this time.”

Hasan could feel the gaze of the cameras in the corners of the room, as if he were the doomed star of some hackneyed reality TV show. He knew he needed to do something. He pictured his father in front of the TV in his underwear screaming at him to shut his mouth and demand a lawyer. He did just that.

“Mr. Ali, your trial has already commenced. It is too late to request a lawyer. You have already waived your right to counsel.”

“Well, yeah, but when I waived that right I didn’t realize the trial had already begun.”

The lights on the machine flickered, as if it were thinking. “Your request for counsel has been approved. Approximate wait time is 71 hours.”

The machine projected the image of a digital clock onto the wall, with the numbers counting down from 71 hours.

“And where am I supposed to stay until my lawyer arrives?”

“You have been remanded to this room.”

“And what if I have to eat? Go to the bathroom?”

The drawers of the desk opened. To his right, he saw wrapped sandwiches, some fruit, a bag of nuts, a salad, a couple bags of chips, a few bottles of water. To his left, he found a bucket. He had just enough slack in his chains to reach out to it.

“What’s next, is a bed going to drop from the ceiling?”

“There is no bed. You have been remanded to the chair. Mr. Ali, please note that as you have requested the presence of counsel, I will not be able to answer any further questions until said counsel arrives.”

“So I’m supposed to just sit here for three days?”

The machine did not respond.

“Well this is just great. You know what, fine, whatever, I’m not giving into your intimidation tactics. I have the right to counsel and you better believe I’m going to exercise it!”

Time passed slowly, the numbers counting down on the wall an omnipresent reminder. Hasan nibbled at the food. He helped himself to the water. He filled the bucket. He was relieved to find toilet paper had been provided. He was thrilled to find he had enough slack in his chains to wipe. He was less pleased with the odor.

He couldn’t sleep in an upright position. His back muscles seized up and his legs began to spasm. His eyes twitched in the low light. His request for coffee went unanswered. He began to lose touch with reality, feeling more like a TV character than a real young man.

Finally, after nearly three days in the room, the countdown was down to just twenty seconds. He heard the sounds of footsteps approaching and he turned his head towards them. The steps came closer and he found his heart rate rising with the pace of the steps. He had waited three days for this.

But the footsteps carried on past his room. He looked over to the wall. The countdown had disappeared.

This story first appeared in The Human Experience: A Short Story Collection 2018. 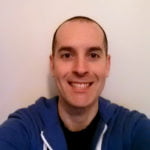 Jared Cappel's work has appeared or is forthcoming in After Dinner Conversations, Blue Lake Review, Door Is A Jar, Literally Stories, and Reflex Press, among others. When he's not writing, he enjoys creating digital art known for its abstract imagery and vibrant use of color. A lover of wordplay, he's ranked as one of the top Scrabble players in North America. Follow the latest at Jared Cappel.