They had caught up and were closing in and the time train was late.

His great(x5) Grandfather’s birth certificate felt massive in his pocket, a nano-singularity. Did that flimsy piece of paper (wood-based!) really cause him to lean to the left?

He lifted his wrist so he could see his timepiece. He watched the second-hand tick seven times until it showed eleven pm precisely. The temporal display showed agitations in the aether.

He heard them behind him, in the crowd, as a constant stream of nonsense syllables. Their ancient dialect barely recognizable as speech let alone as language.

Was he doing the right thing? He wiped his sweaty palm on his shirt. He hated waiting, after so much wasted time it felt wrong. But it was all relative anyway, right?

He resisted the temptation to pace. He stood, bright shiny shoes three inches apart, grey slacks pressed into a knife-edge, his shirt tucked half in and half out of his waistband.

His hand wiped itself on the shirt again. His eyes ticked to his watch, the flashing colon, the tracks, and back to the watch. He resisted the urge to shuffle his feet. The voices moved closer, and the nano-singularity in his pocket seemed to be gaining mass.

He felt the wet patches under his arms, he felt sweat run down his back to soak into his waistband. He wiped his already damp sleeve across his brow and caught another sight of his timepiece as it moved past his eyes. More seconds wasted and the temporal agitations had become aethereal distortions.

His eyes ticked to the tracks. Was it coming? Another bead of sweat ran down his back, another second gone.

Someone stood behind him and he heard a familiar voice talk softly in a dialect he understood. He felt a hand press down on his left shoulder. He knew he would soon fall under all that combined weight.

“Stop running,” the voice said. Other voices spoke but he did not understand them.

“I have to go back, Constable,” he said, feeling a deep bass rumble through his feet.

“You cannot,” the Constable said. “You’ll doom us all.”

“The timeline will re-assert itself, all paradox will be erased,” he said. He knew if he turned around and looked at the Constable he would be looking into his own face, his own eyes. “You will be erased.”

“Can you be so sure?” said the Constable, who was also him. “Perhaps it is you who will be erased, perhaps both of us.”

“It is wrong,” he said as the train pulled in to the station. His whole body vibrated to that bass rumble.

With a clap, air rushed in to fill the space where he had been.

The Constable lowered his arm. “Damn it. Just in ti-,” he said and disappeared.

This story originally appeared in 365 Tomorrows. 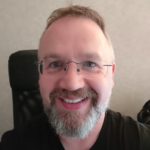 Jason Kocemba lives and writes in a house with two humans, one cat and one dog. He loves stories and is a lifelong creator and devourer of them. He is an optimist and has hope that he will learn from his mistakes. If you like, you can find out more at jasonkocemba.com.