As William ambles into the kitchen to retrieve his morning coffee, he slips on a patch of melted ice. When he falls on his back, the dishwasher swings its door open and smacks him on the head.

“Keepin’ it cool!” the fridge announces and pelts his crotch with a torrent of ice, chipped, of course, just how Amelia liked it. William lays stunned on the floor until the Food Prep Deluxe, which usually hangs retracted next to the kitchen cabinets, swings its long mechanical arm out to snap at his pant leg. William flails across the tile floor until he’s out of reach. He crawls to the living room couch and sits there all day, fiddling with the little pillows Amelia had spent so much time embroidering. At first, he is confused and angry about what he imagines are major malfunctions in what is supposed to be cutting-edge technology. But after contemplating the intricately designed embroidery and listening to the appliances jibber at one another for hours, he knows better. It had not been a malfunction. It had been a coordinated attempt.

The voices in the kitchen stop. The dishwasher beeps.

He doesn’t have the passcode. He tried to reset the damned things three times last night to no avail. The kitchen is stuck on Amelia’s settings. The appliances are her pawns, just like he had been until he’d taken his life back — until he’d grabbed Amelia’s shoulders and pushed her over the edge of the cruise ship, watched as she disappeared into the great blue below, panicked when he’d noticed her bright pink sandal still sitting on the ship’s deck. He’d given the sandal such a kick that he’d lost his balance and nearly fallen into the great blue himself, but recovered, and, in the end, had agreed with the police that Amelia must have drunk too much. Must have toppled over the side. How sad. What a tragedy.

My God, he thinks, the kitchen is plotting against me because it knows. But how? How could machines know?

Amelia had suspected he’d do something on the cruise, hadn’t she? And she’d warned the appliances, somehow programmed them. But did the appliances know how she was going to leave him and take half – HALF of his life earnings with her?

“Alert,” the Food Prep Deluxe announces, “An update must be made to ensure the safety of your appliance. Please enter your passcode. If you have forgotten your passcode, let us help you create a new one.”

Ha! Well, they should have finished the job when they’d had him on the floor this morning. He hurls one of the little embroidered pillows against the wall and realizes he has always hated the way the living room is furnished. Why did he let Amelia have so much say over the house? He had let her design and decorate the whole place. There was nothing of himself in it. He should put the house up for sale. He should move on and be done with Amelia and her diabolical kitchen for good.

He storms downstairs to find the electrical box. He’ll cut the power to the whole place and call a real estate agent in the morning.

When he’s halfway down the stairs, the basement lights cut out. Ha! They will have to do better than that! He uses his cell phone flashlight to make his way over to the electrical box. He’s two steps away when, with a little chirping jingle, the behemoth clothes washing system, The Express Wash, Dry, ’N Fold, comes to life.

William freezes as the machine’s bright white LEDs illuminate long chrome-plated arms, the ones for loading laundry and folding clothes. One arm is extended between him and the electrical box.

The washing system greets William with its dull, matronly voice.

“I’m sorry. Only user Amelia can make changes to the washing schedule.”

The robot arms fold William over, lift him off the ground, and stuff him into the stainless steel, heavy-duty, eco-efficient, ultra-load washing bin.

As the bin door shuts, he kicks at it but it’s no use. Amelia had planned for this. And, if he’s being honest, isn’t that what he’d been attracted to the whole time? She had his number and it drove him crazy. Till death do we part, he thinks. Ha, ha, ha.

The bin only fills with enough water to dampen his clothes and for a moment he allows himself to think perhaps this will not be as bad as he had imagined. He hears a distant cacophony of beeps and chimes coming from upstairs, an inhuman, precisely calibrated celebration. He tries the washer door with a sudden animal rage, kicking and screaming. It won’t budge. The wash cycle begins. It’s worse than he imagined. 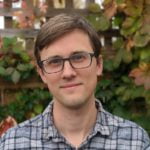 Travis Wade Beaty grew up in Northeast Indiana, spent a good deal of his twenties in Los Angeles, and now resides in Washington, DC. While he’s had a great many jobs, his favorites have included acting, teaching, and being a stay-at-home dad to two girls and two cats. He can be found on Twitter at @TravisWBeaty or his website, TravisWadeBeaty.wordpress.com.