The oven clock read 7:46 am on Christmas Eve day, when the banging on Minerva’s apartment door started. She ignored the intrusion—too many dangers lurked outside her little apartment.

Her kitchen timer chimed and she scrambled to pull on oven gloves. Her cat, Lucky, jumped onto the counter. “Shoo, down from there.”

The gingerbread ninja cookies for her grandchildren were perfectly baked. Her brother Abner would pick up her son and his family at the airport that afternoon.

She inhaled the spicy scents of ginger and molasses.

“I guess I’d better check it out,” Minerva grumbled. A butcher knife in one hand and her trusty broom handle with the nails pounded through one end, in the other, she shuffled across the room, stood on tip-toe and squinted through the peephole. Her neighbor, Louise peered back. Her face appeared distorted, but the rot alarm hadn’t gone off.

“Hold your ever lovin’ horses, Louise,” Minerva fumbled with the six locks. One couldn’t be too careful, what will all the troubles.

Minerva turned the knob and the door burst open. Louise filled the doorway, hands on hips.

Minerva brandished her weapons, looking the intruding woman up and down. “Stick your tongue out,” she ordered, knowing full well Louise was fine.

Louise rolled her eyes and complied.

Cheeks red, Louise struggled to catch her breath. “Daughter called. The one…the one who works at Bullseye. Ran to tell you…”

Louise heaved and gasped. She bragged about her daughter endlessly. Minerva didn’t hear much from her own son, and was forced to make things up about him to tell Louise.

Minerva tuned Louise out, and pictured her son and grandchildren’s visit to her apartment. Everything for Christmas Eve must be perfect. They’d leave in the morning to visit her daughter-in-law’s family for Christmas day and who knew when they’d be back.

She glanced back at the kitchen and sighed. From experience she knew it best to hear Louise out. She’d leave quicker that way.

Something Louise said caught her attention. “—trying to order a Monster Family house for your grandkiddies.” Louise fanned herself with one hand. “You and everyone else. Well, I told my daughter, these people are dreaming if they think they’ll find one.”

Minerva blinked. Louise did love to drag things out, but she’d caught her interest. “Why don’t you come in and sit, Louise? I’ve more baking to do.”

“You can finish later. My daughter says they just received a late shipment…” She paused dramatically. “A crate of Monster Family House starter kits! They’re putting them out now and they open at nine. You have to get over there!”

Minerva gasped. She’d given up on acquiring the prized toy-of-the-year. She set aside the knife and the broom handle, wrapped her arms around Louise and squeezed. “Thanks, I owe you.”

“Yes, you do.” Louise let herself out.

Minerva reset the locks, quickly downed a couple of extra-strength acetaminophen for her arthritis, and grabbed her late husband’s hickory cane. She needed to get moving before Louise posted the news on Facebook.

Standing at the front of the throng of parents and grandparents outside Bullseye, Minerva experienced a twinge of unease. What was she thinking? It was foolish to queue up for a toy.

The regular drills at her senior’s complex stressed the importance of avoiding crowds because they attracted the infected. She silently chided herself—don’t be silly, it must be safe if so many are out. The store will have taken precautions.

Louise had drawn her a little map of its location, and she’d be one of the first to reach the display.

Minerva braced herself as the doors swung open, then charged.

Around a corner a stack of Monster Family starter kits formed a pyramid in the middle of the aisle. Her path clear, she hobbled along, already hearing her grandchildren’s shrieks of delight.

She wrapped an arm around a box, turned and faced the mob, ducked her head and led with her shoulder.

Hands grasped at her prize. An angry grandma growled in her ear. Someone tried to trip her. With one hand, she swung her cane. The shrieks still echoed, but they sounded more scared than delighted.

Pain tore through her shoulder. She struck out with the walking stick, knowing it was already too late, and she’d been infected.

She hid under a rack of Santa suits and peeled back her cardigan sleeve. The skin had been broken in an oval pattern. A bite, no doubt about it, but she could still move her arm. She re-buttoned the cardigan and arranged her shawl to cover the tear.

Halfway to the exit, a police woman stopped her.

Down the aisle a young paramedic attempted to calm down a knot of gesturing grannies all claiming ownership of the same walker. A pony-tailed soccer mom lurched by and sank her teeth into the arm of one of the grannies.

The police officer shouted at Minerva, “Wait there!” And ran off.

Twenty-four to forty-eight hours for full symptoms. They’d just cart her off to the holding center until she manifested and she’d never see her son and grandchildren again.

She’d scuttled out of the mall and home, toy still in hand.

In her apartment, she dragged her knitting basket over to Harvey’s old recliner, hoping to find comfort in her late husband’s presence.

Her fingers didn’t ache like they usually did, but the joints felt a little soft, and sort of spongy. The larger knitting needles were easier to handle. She cast on a row of stitches.

After a few minutes, she paused. Better to be safe. She removed her false teeth and buried them deep in the basket.

Lucky meowed from across the room and behind the couch.

Abner held up a blanket-draped bird cage. “Had to bring Tweetie, else she’d pine for us.” He looked around. “Where’s that damned cat?”

Minerva waved toward the kitchen. “Hang it from the hook by the window. I’ll keep the door shut.”

Lights twinkled, decorations shone and the children gathered around the tree. “Can we open the presents, Grandma, please, please?”

Minerva shook her head. “After we eat. I’ve made all your favorites.”

She’d worked the rest of the day preparing and hadn’t needed an afternoon nap. She felt fit and fine, if a little wobbly when she walked.

She hugged her nearest grandchild, Celeste, and the sweet scent of cinnamon enveloped her. The child smelled delicious! She inhaled deeply, leaned forward…and backed away quickly, her hand clamped over her nose.

“Help yourself to food,” her voice rumbled out low and gravelly.

No one seemed to notice.

Minerva couldn’t relax. Her appetite for the food on the table was non-existent, so she sat down and continued her knitting. The scarf already measured almost five feet.

“Grandma, are there any more mincemeat tarts?” Keenan, her youngest grandchild, asked.

His cinnamon aroma beckoned. Minerva’s heart thudded against her rib cage. “They’re in the kitchen, sweetie. I’ll get them.”

The canary smelled like chili-chocolate, her favorite. Minerva stood behind the closed kitchen door and tried to focus on the happy sounds of her grandchildren. It wasn’t enough.

“Meow.” Lucky twined around her ankles. His curried-ginger aroma wafted up.

Her stomach rumbled. Her arms and legs twitched. A low moan escaped her lips, as a wave of hunger washed over her.

Minerva settled back into Harvey’s recliner. Her family laughed and sang. She felt in control again, but as a precaution she wrapped the length of the scarf around herself, and the chair before continuing to knit.

“Grandma, will you play Monster Family with us?” Celeste stared up with liquid brown eyes, the scent of cinnamon heavy in the air.

She belched softly and a tiny yellow feather puffed out of her mouth.

No one noticed the draft from the open kitchen window. She hoped they believed a guilty Lucky had fled through it. Pushing away a twinge of guilt, she kept knitting.

Alone in the apartment the next morning, Minerva found it awkward to disengage herself from the scarf she’d knit all night. It was wrapped around her abdomen, arms and neck. A good idea while her family was there, but they’d left a few minutes earlier.

She’d pleaded aching bones and a holiday cold, and waved good-bye from the recliner. Disentangling herself was taking a long time and she needed to reset the locks.

“Minerva! Minerva, are you there?” Louise called out in her annoying sing song voice.

Oh no, Minerva frowned. Her cheekbones cracked loudly. For once, can’t Louise just leave me alone?

“There you are. You poor thing, left alone on Christmas Day.  My daughter and her kids are staying until tomorrow.” Louise started fussing with the scarf. “You are all wrapped up.”

“What do you want?” Minerva ground out.

“Oh dear, you’ve been crying, I can’t understand a word.” Louise leaned over her. “I’d cry too if my family left me on Christmas morning.”

The aroma of candied bacon almost overwhelmed Minerva. She closed her eyes and held her breath. “You need to leave, Louise.”

“What’s that? Have you been drinking? I see there are lots of leftovers. It must be so upsetting to look at all that extra food. Listen, I have more family in my apartment than I planned for. My grandchildren will love your ninja gingerbread cookies…”

Minerva smacked her gums, savored the bacon scent and reached deep into her knitting basket. Louise was packaging leftovers as Minerva slipped her false teeth back in and lurched to her feet.

“Merry Christmas to me,” she moaned and grabbed Louise’s arm. 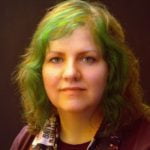 Surrounded by gnomes, gargoyles and poisonous plants, KT Wagner writes Gothic horror and op/ed pieces in the garden of her British Columbia home. A number of her short stories are published in magazines and anthologies, she’s currently working on a scifi-horror novel, and can be found online at Northern Lights Gothic and on Twitter @KT_Wagner.