Johnny had barely scraped up the money for bellatrification.

His real name was Horatio, but he would have rather bitten his leg off than reveal it to the guys in the band. All the Explosive Farts members had stage names: Greasy Dog on the drums, Ugly Rick on the bass, Stevie the Fish on the guitar, and he, Johnny Rabid, on lead guitar and vocals.

He was an eager pup high on retro music and, despite his angelic face, he could wail like a dingo.

But his face… What a disaster!

Johnny did not blame his parents. They wanted the best for him, and that included a physiognomy optimization procedure in the womb. It eliminated the need for plastic surgery. Health insurance covered it. As a result, all the adults looked twenty – a perfect, magazine-cover twenty.

Then Bella showed up.

To say that Bella was uglier than a run-over raccoon would be an understatement. Rumor had it that she was a mutant, impervious to optimization. In a world of perfect faces and bodies, Bella stood out as a beacon. Incredibly ugly. Incredibly cool.

She got her legendary band – Bella and the Beasts – together at seventeen. She wrote fantastic songs. She was a superstar.

Bellatrification became a question of time. It began with wannabe stars copying Bella, then it spread among the rich kids who wanted a “natural look” and soon enough everybody who wanted to be somebody was doing it. However, the insurance did not cover the reversal procedure. Imperfection became a status symbol overnight. Or, for Johnny, a necessary career move.

All the guys in the band had already done it. Greasy Dog worked as a studio musician and could afford to turn back into a blubbery whale. Ugly Rick borrowed the money but his ratty snout proved to be so amazing that he earned tons of cash as a model. Stevie was a trust fund baby. And Johnny? Johnny worked two jobs and sang in the evenings. He saved every dime he earned.

In the end, the boys shortened his agony. “Take the money,” they said one evening. “We’ll all profit from your ugliness.”

And so Johnny found himself in a clinic for optimization reversal. He sat on the edge of an examination table in a paper gown, dangling his feet.

“We can begin now,” said a nurse. She was still optimized, he noticed. “Do you want to see your face for the last time?” She pointed to a big mirror beside the reversal machine. “Most people want to say goodbye to their old selves.”

“All right. Lie down here, please,” she led him to the machine. “The procedure lasts for approximately twelve hours. When you wake up, you’ll be different. There may be some discomfort until you get used to your new body, but that depends on the deviation from your current look. Don’t worry, we’ll give you painkillers.” She smiled. “Ready?”

He fell asleep and dreamed his band was opening for Bella and the Beasts. He stood on an enormous stage, surrounded by green fire, when she appeared: a goddess in black studded leather, with aquiline nose and crooked teeth, flat chest and spindly legs. Her eyes, like two pieces of burning coal, drilled straight into his head. The noise of the crowd subsided into a murmur interrupted by rhythmical beeping.

“Time to wake up,” a familiar voice said. Light fell on his face and he opened his eyes. The nurse gasped. Her horrified face revealed something had gone seriously wrong. She pressed a button and the room filled with people in white coats.

“Unstrap me,” he begged, but they just whispered to one another.

Eventually, one doctor stepped forward. “Come.” He took him to the mirror. Johnny expected to see something terrible, a monster.

But all he saw was Johnny. Plain old Johnny.

He wanted to say, “Where’s the fuss?” when he realized. He looked the same.

“We don’t know yet,” the doctor said. “Please wait here.”

They gave him a cup of juice and left him alone. He kept touching his face, searching for the tiniest change.

He was at his wits’ end when the doctor returned.

“Oh no, you’re not.” The doctor shook his head.

“Then why did the reversal procedure fail?” he asked desperately.

“It didn’t fail as such,” he produced a bunch of charts. “The problem is in the previous procedure, the optimization. That one didn’t work.”

“Optimization didn’t affect you because there was nothing to optimize. This is your actual physical appearance.”

“This is your face, Horatio. Had you been born before the invention of the optimization, you’d have still looked like this. Simply put, you’re extremely handsome. There’s nothing we can do.”

Johnny felt his life shatter like a crystal vase.

“That is impossible, I’m afraid.”

Later that evening, he sat at the bar with the guys.

“My music career is over,” he said. One treacherous tear rolled down his cheek and dropped into his beer.

“Dammit, Johnny,” Stevie said, “we’ll never get another singer as good as you. But no label will sign us if you look like this.”

“I’m sorry. Those bastards at the clinic…”

“Wait,” Greasy Dog cut in. He turned and whispered something into Rick’s ear.

“Yeah, that might work.” Rick’s ratty face broke into a smile as he leaned towards Stevie.

They went outside. There were three or four hovercars in the dark parking lot, but no people.

“We’re helping you because we love you,” Stevie said.

Out of the corner of his eye, Johnny caught the glint of a bottle in Greasy Dog’s hand, flying through the air.

And then it hit him. 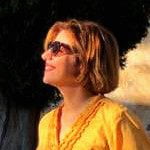 Jelena Dunato is a writer and translator. You can find her on Twitter at @Jelenawrites.