The creatures responded to many forms of music, but they sought out primitive resonances, connections that were startling, at first.

My first breakthrough was when I played a child’s skull. I drilled small, delicate holes, and then whispered a dead infant’s dreams as I blew through them. I summoned everything that such a melody might evoke. Yearning, hope, ambition.

Notes wailed through it, plaintive chords almost imperceptible to some. These were melodies of pleading, of dream-like resonance. The creatures were entranced by the compositions I was finding.

The first time I finished playing a skull, I kissed its forehead, some small acknowledgement to the person that had passed so an instrument could sing.

Seeing this, the creatures were moved.

They were sentimental about suffering, if little else.

I’d first met them in the alley, almost three months ago. I hadn’t been able to compose in over a year, three funerals in one month will do that to you.

“Car crash,” I’d explained to Sarah. She worked at the bar, put on a patient face sometimes. I’d told her I was running on empty, never been much of a drinker before, but boy, had that changed.

When I was leaving, she suggested I use the alley as a short cut.

I walked until a scream made me stop.

I didn’t understand what was happening when they approached me. They were patchwork things, stitched together from broken silhouettes, or so it seemed. They were picking at a vagrant’s corpse, intoxicated both by hunger and what it made them do. Our shadows overlapped, and we exchanged misfortunes. My misery appealed to theirs, and they inspired me to play again.

When one of them sent me a bone, I didn’t know what do with it. It was blackened, wrapped in a bundle of white cloth. There was something almost ceremonial about it.

Sarah had to explain it to me. “They want you to make a new instrument.”

This is how it begins, I thought. I’d caught their curiosity, now I’d earned their desires. Whatever happened next would come from this.

And so, I took everything I knew and discarded it. I would decompose, so to speak. Take apart how I saw an instrument, reverse engineer that scream in the alley, but instead of an act of violence, create the tension of poetry.

Tune it to my soul, and then play whatever notes I found there.

But what if there were none?

I tried to ask Sarah about this, but she was never comfortable enough. We never talked about them. Only music. She loved to hear how different men wrought conflicting sounds from their different pains. It was a true language, she’d said, once.

Eventually I began to wonder if I could play her, like any instrument. I would have dismissed it, but promises were notes, bodies were melodies, and I knew kisses made composers of us all.

Which was, strangely, not a comforting thought.

At the end of the alley was an old wooden door that led down to a basement. I stood under a single swinging bulb, playing my songs while I heard them dance around me.

We didn’t communicate, didn’t need to.

When the performance was finished, I found another bundle of rags at my feet, more bones. Among them there was an antique watch, a gold tooth. Little trinkets or gestures. I pawned them, and found I had more than enough to live off.

When my mother tracked me down, calling me in my cheap hotel, I told her I’d moved on with my life. “It’s fine. I’m a decomposer, now.”

But she didn’t understand.

Usually I was the last person at the bar. Lately it had been emptier than ever. Sarah studied me as I drank. She noticed a new watch on my wrist, but didn’t say anything.

I asked her to come to the show, and she begged me not to go. “What do you think you’re doing? I mean, where do you think it ends?”

I didn’t know why she’d first sent me to the alley. I wondered if she’d never expected me to leave. Had that meant to be a mercy? “It is a remarkable honor, for a musician to know he has found his audience,” I told her.

She hadn’t made peace with them like I had, I understood that. She was afraid. They weren’t beautiful to her. But then what did she know? I’d been engulfed in darkness so long, that finding it wasn’t empty touched me more than light ever could again.

Something oddly desperate entered her tone. “What about your old life? Your old music, you’re just done with it all?”

I thought of Marie and the kids, watching from the front row. Smiles like theirs couldn’t exist any more.

She shook her head. Was it just me, or had she began to look increasingly unnerved, somehow haunted, by the connections I’d made?

I wanted to reassure her. “Still, thank you for explaining their ways. When I call, you always pick up.”

Sarah said something, but I was distracted by the fluttering of wings, the tap of dancing feet. The notes were already there, just calling for someone to put them together.

I picked up my bag of bones, then finished my drink. “One day you’ll come,” I smiled, “and you’ll dance.”

I dismissed the look on her face, then walked out and turned into the alley.

My audience was waiting. 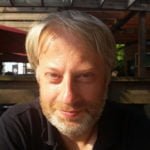 A writer living in North London, Barry Charman has been published in various magazines, including Ambit, Firewords Quarterly and Popshot Quarterly. He has a blog at barrycharman.blogspot.co.uk.