The two thieves stood before the giant vault, fresh out of ideas. “Well?” Braygin prodded, “what do you think?”

Tesca shrugged. “I think the Regent’s not going to be pleased.”

“The Regent’s never pleased. When he hears about this he’ll be furious.” Two of the vault’s magnetic locks hung open; those had been easy. But the third… Braygin kicked a box of gear at their feet. “Are you sure you’ve tried everything, little man?”

“Hmm. Guess that means we’re in the right place,” said Braygin, wiping a bead of sweat from the back of his neck. “Those rumors about Admiral Gnossi hiding her money in the gas oceans of Denovia must’ve been hogwash. But how do we get in there?”

Tesca fidgeted in his cumbersome spacesuit. “Whatever we do, it better be fast— security system comes back online in fifteen minutes, and we’ll need five of those to get back to the ship and blast off.”

“Damn, to come so close!” Braygin slammed a fist against the plasteel face of the vault. He could almost taste the loot just out of reach. After months of bribing and snooping out the location of the asteroid base, they’d burgled deep inside to rob the Regent’s biggest rival blind. Even a small share of whatever they stole could buy them each a small moon to retire on, but it seemed the vault had defeated even Tesca’s technocriminal talents. “There’s absolutely nothing you haven’t tried?”

Tesca looked away. “I wasn’t gonna say anything—”

Tesca knelt and rooted through the box, tossing the various bits of equipment that’d failed them about the dim chamber. He rose holding an awkward, cobbled-together mass of wires and metal. An antimatter symbol emblazoned on the side screamed warning. “It’s just a prototype…”

“Well, technically it’s not the ship that moves, it’s space itself—”

“Whatever,” said Braygin, “you mean you built a handheld version? Incredible, you could ‘displace’ us right through the door! Why didn’t you start with that?”

“Like I said it’s a prototype…also, the parts are highly illegal.”

“Illegal? Tesca, we’re breaking into Admiral Gnossi’s vault. Just use the gadget so we can grab the cash and get outta here.”

“But it’s too dangerous! Without a full scan we’ve no idea what’s on the other side. There could be guardbots, automated defenses—”

Braygin clapped his partner on the shoulder. “Look, this is the score of a lifetime— I’ll take the risk. Unless you want to be the one to bring the Regent the bad news?”

While Tesca worked the controls of the device, Braygin again eyed the great circular door, licking his lips with anticipation. “This is it. It’s finally happening, after all these years. My big payoff. No more penny-ante con jobs, no more rackets. No more bowing and scraping before thugs like the Regent…” He turned back to Tesca. “Hey, how do you work that thing anyway?”

“Hmm? Oh, it’s pretty simple. You set your field radius, set your displacement vector—say, three meters straight ahead for this door—then hit go. Only enough juice for a couple short jumps so we best go together…there, all set.” Tesca put the device down and went to retrieve his helmet—the atmosphere in the tunnels was thin but breathable and they’d quickly set them aside. “Better suit up all the way, just in case— oof!”

While Tesca’s back was turned Braygin shoved him hard, and the low power grav plating sent him tumbling. Braygin grabbed the displacement device and caressed it greedily. “Sorry, Tesca, like I said this is the score of a lifetime, and I find I ain’t willing to split it. Nothing personal; you’d do the same in my place if you had any brains for business. So long little man!”

“No, Braygin, don’t—!” Tesca watched as Braygin was enveloped in a blue orb, then winked out of existence along with a little section of tunnel floor he’d been standing on. Tesca scrambled for his comm unit. “Braygin! Are you there? Braygin you lying cheat, talk to me!” Nothing.

After a few stunned seconds Tesca heard a low bang emanate from the vault door. From the other side it seemed. Then another, much weaker. Then silence. “Braygin?” He rummaged through his box of gear for a data pad and tried to patch into Braygin’s suit camera. Though the signal was weak through the insulating plasteel he managed to pick up an image, but no sound. It was rotating, slowly. He saw the other side of the door, then a wall of rock. A gloved fist drifted across the camera’s field of view, and when it passed Tesca saw only a field of stars, stark against the blackness of open space.

“Huh,” Tesca muttered to the empty chamber, glancing at Braygin’s helmet left forgotten on the floor. “I guess Admiral Gnossi does keep her money on Denovia after all.”

Tesca gathered up his most precious gear and scuttled back to the ship. No, the Regent was most definitely not going to be pleased.

This story originally appeared in Nature. 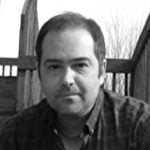