Doctor Garbanzo rushed upstairs to the office and threw open the glass-paneled door that once bore his name. Professor Cardamom was sitting behind his old desk—worn penny-loafers resting on the now tarnished and scratched mahogany, its surface covered in coffee stains, ashes, and browning apple cores.

Cardamom picked up his pipe and ashed it onto the desk before refilling it with a damp and salty-smelling tobacco. “Forgive my confusion, Doctor, what can I do for you today? Care to join me for a smoke?”

Garbanzo cast his eyes about his old office, disgusted by the new decor. The nicotine-stained walls were cluttered with curios. Shrunken heads and African masks. Glittering gemstones. Ivory figurines and strange bronze gods. Bookshelves lined with hundreds of leather-bound occult and esoteric explorations.

“First off, I quit smoking,” he said. “And secondly, I want you to know that I find the prospect of working with the man who ruined my name and usurped my position repulsive. Were my circumstances any different I would have nothing to do with an archaic trope such as yourself, but you are precisely the kind of character I need right now.”

Professor Cardamom seemed to be paying more attention to his pipe than to Garbanzo. His eyes kept crossing as he tried to pull on it. It was making a boiling sound somewhere in the stem. He struck another match and inhaled deeply. The damp tobacco ignited and the pipe made the sound of an unclogged drain. Black fountains of smoke bubbled out of Cardamom’s mouth and nose and splashed onto the threadbare carpet. He began coughing profusely.

“If you’re still mad about the whole getting-you-fired thing, how was I supposed to know your degree was really a fake when I claimed it was a fake? I thought it was real! After all, you had a tweed jacket, a pipe, and bow tie—just like me—and I’m as real as this shelf of books!”

He plucked a crumbling copy of the Necronomicon off the wall and began to thumb through it, puffing his pipe absentmindedly. “Besides, you should thank me,” he said. “You quit smoking! And on top of that, you now possess an actual Ph.D. and can join us all in the ranks of the real. By the way, what did you finally end up getting your doctorate in?”

“Postmodern Literature. My thesis was on deep-sea metafiction. Writers writing stories about writing in the depths of the briny-brine, with anglers and jellyfish for limited perspective—you understand. I’ve spent the last few years in the field, writing short stories while scuba diving.”

“Well, Doc,” said Cardamom, “the next time you write one, make me a character.”

Garbanzo smirked. “To be sure. I already have. Won’t you accompany me now in a short outburst of uncomfortable laughter?”

Cardamom joined Dr. Garbanzo in a forced laugh that ended as abruptly as it began.

Garbanzo was convinced he could hear the smoke from Professor Cardamom’s pipe settling into a cloudy puddle at his feet. Even the masks and shrunken heads all seemed to be holding their breath.

After an awkward moment, the silence was broken by the farting sound of squeaking leather as Cardamom settled into his chair. He folded his arms behind his head and leaned back.

Garbanzo longed for a pipe of his own to smoke, his every cell seemed to crave nicotine, but he refused to give Cardamom the satisfaction of seeing his resolve fall apart.

“The first problem I faced was obtaining proper writing materials for the excursion,” he continued. “The diving equipment and a ship with a crew were easy enough to acquire in Bermuda, but to write while submerged required special consideration. Pencil and paper were out of the question, obviously, and the gloves to my pressurized dive suit were too thick-fingered to allow for use of the waterproof typewriter I like to use to practice on in my bathtub at home.

“On top of that was the problem of the lights. The whole purpose of this expedition was to write about what it is like to write about deep-sea creatures in their natural state, but the lights made them act out of the ordinary. I needed to see them without my seeing them changing their behavior. Kind of like Heisenberg’s Uncertainty Principle, applied to ichthyology, in the creative arts.”

Professor Cardamom chuckled at this. He pulled on his pipe and coughed a loud, wet cough. “My, my,” he said with a smirk. “Let it never be said that writers with Liberal Arts doctorates are out of touch with the world’s problems.

“Whatever did you do?”

Smoke was pooling on the floor. It was obscuring Garbanzo’s feet and swirling around the legs of the desk but Garbanzo didn’t seem to notice. He leaned across the desk and plucked the pipe from Cardamom’s mouth.

“That’s where you come in, my imaginary friend. I was made to believe that you have a solution to my problem.”

Cardamom leaped from his chair and waded across the room, smoke swirling about his knees. He opened a cabinet and removed a large panel of translucent plexiglass. It was just a little bit taller and wider than an average door.

Garbanzo wondered for a moment how it had fit into the cabinet, but he was nearing his maximum word count and too close to the deadline to turn back now.

Garbanzo held the pipe at arm’s length. The bowl was overflowing, smoke running down like water—flooding the office. It was already up to the top of the desk. Apple cores and ungraded essays were bobbing on its surface. The Necronomicon disappeared beneath the smoky waves.

“I made it as large as I could,” said Cardamom, gesturing to the almost invisible panel. “Even so, it’s pretty unwieldy. If you write small, you might be able to fit a good first draft on it.” The smoke was up to his chest as he set it against the wall.

“I’ll be right back,” he said and dove below the surface with a splash.

Doctor Garbanzo looked around the room. The only sound was pouring smoke. It was up to his neck now. It smelled good. It smelled like a day at the beach.

He handed it to Garbanzo.

Garbanzo was about to hand Cardamom his pipe back when he felt something brush up against his leg.

“What was that?” he shrieked.

“What did you expect?” responded the Professor as he stared into the murky waters beneath him. “That you could delve deep into the subconscious as easy as hopping in and out of a pool? There are terrifying things down there, and—“

But that was all he got out. There was a quick, frantic splashing, an ascent of bubbles, and then nothing. Cardamom was gone, and so was the office.

Doctor Garbanzo found himself alone on an endless, tar-scented sea. His mind recoiled as he began to imagine what kind of creatures might be below him. Tobacco sharks. Nicotine squids. Chawdads. He swam in fear, not knowing in which direction he went. Clutching the pipe and the glowing marker, he swam until his arms were too tired to continue. Still, there was nothing for miles except the billowing waves of smoke.

Muscles giving out, Garbanzo gave up. Garbanzo gave into temptation. As he sank into the depths he put the smoldering pipe between his teeth and took a long drag. He was shocked to discover that he could breathe through the pipe like some sort of carcinogenic scuba mask.

He sank lower and lower, blowing bubbles through the pipe. The marker’s faint luminescence shone around his hands in shimmering pink and yellow. Purple and gold. All around him—just out of the dim halo of light—he could see the deformed silhouettes of swimming things.

Without warning, his forehead bumped into something in the darkness. It almost knocked the pipe down his throat.

The object was flat and hard, and bigger than a door, but nearly clear. Holding the marker up to it, he saw a gentle reflection.

It was the plexiglass tablet.

Doctor Garbanzo brought the tip of his glowing magical marker to the surface of the invisible page. He was ready to write the story.

This story originally appeared in Riddled With Arrows Literary Journal 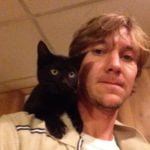 Tim Burkhardt is a writer who lives in the Blue Ridge Mountains outside of Asheville, North Carolina. His work has appeared in Riddled With Arrows, The Horror Tree, and forthcoming in The Dread Machine. He spends the rest of his time raising his two sons and their rescue cat, Keats. His work can be found at TimothyBurkhardt.wordpress.com. Follow him on Twitter @TmthyBurkhardt.