When I tore the first layer from Zolan’s body, I found a different person beneath.

On the outside, he was a charcoal-skinned, sharp-jointed creature, with eyes like captured fireflies. Ever the charmer, he insisted I was the most beautiful woman in all the land: my smile, he said, shone brighter than the tumbling prisms of Baraxia’s Crystal Falls.

That was outer-Zolan. The man inside was something else.

He never wanted me to look beneath, but I persisted. On our tenth night together, in a silk-draped forest-bed, he acquiesced.

He was a shriveled, pink creature, one eye swollen shut, with a hunched back and three limp tails. I passed him a mirror, and he nodded at his reflection. We talked until daybreak.

Nothing was the same.

I’d loved Zolan, but I did not love the creature inside. I left him to scoop up the pieces of his shredded outer layer. We never crossed paths again.

I wandered the world, seeking the next Zolan. Around me, rumors of war grew: great armies crossed the plains, abolishing alien ideas, sending monsters to the graveyards of legend. Time was running out: I needed to find love, before I was forgotten.

Zolan was not the first, nor would he be the last. For centuries I’d cared little for companionship; I thought it beneath me. Then someone found me. Felia? Fellena? Her name escapes me. But at the time, I’d thought her the one—my true love. I was wrong. Her inner layer was a hideous thing: black, bubbling tar, oppressive and hot as the desert sun. Still, she’d given me a glimpse of what life could be like with love. So began my obsession.

After Zolan was Marok, a soldier in the war. His shoulders were broad, his arms tattooed with glittering sapphire curves. Despite his profession, he nurtured a love of poetry and dance. I asked to peel away a layer. He refused. I stayed with him, and in two months’ time, his exterior sloughed on its own, like a snake’s skin.

Beneath was a complicated creature—a mess of sharp angles and thorns, like a human rose-bush seen through a cracked lens. He still claimed to be a soldier, a poet, a dancer—but his movements were jerky and insecure, and there was darkness in his chest. I stayed with him another year—whether out of love or pity, I’m not sure. In that time he shed another layer, revealing a skeletal figure with loose limbs and a fractured neck. There was no love there, for either of us. I left.

I pursued companionship aggressively, determined to make up for wasted time. In all corners of the world I searched: the lakeside village of Luce, where Danton’s reptilian inner-layer broke my heart; Aria City, with its golden towers and rose-pink cobblestones, and politician who didn’t warn me of the bloody bear-traps at her core; the countryside prowled by Rogash the Wanderer, who would rather kill me than show his true self. I left his bones under the peach tree where we’d first kissed.

All the while I heard tales of battle, their outcomes disconcerting. In my travels I encountered a woodland shrine devoted to me: the blood-adorned stones had been toppled, the bone-charms stomped. Before long, the last few who revered my kind would be smothered by the tide of war, and I would be swept up with them. I wasn’t ready to go—I needed more time to find that which my heart sought.

In the bakery, I met Kai.

He brought me the honey-cake I’d ordered, along with a raspberry tart for himself. He joined me at the table outside, where we chatted and laughed under sun-gilt clouds. Kai let me try his tart—the best item from his kitchen, he said. My joy must have been evident after that first taste, because he insisted the rest was mine.

Kai was as sweet as the treasures he baked. Everything he did was for me. I’d been worshipped before, by strangers who never quite knew what I was, but no one had ever loved me like Kai.

Naturally, I was skeptical. After all the others, how could I not be? Kai’s outer layer loved me, yes—but what about the rest?

I wanted to wait—to let Kai reveal himself naturally. But the end of war was rapidly approaching, and I didn’t want to leave that world before knowing true love. Every day, I cursed myself for all those wasted centuries—for not starting sooner.

I asked Kai to let me dig—to expedite the process. He agreed.

I tore away his outside, revealing a dark-eyed, stubble-cheeked man beneath. His hair was thick, and just long enough to run my fingers through.

I’d never met a mortal who didn’t change from one layer to the next. It was unsettling.

With permission, I shredded another layer. We shared the same laughs and smiles we always had. War tore through the countryside. Kai continued holding me, even when he grew sick.

I didn’t understand. I removed another layer.

Kai remained unchanged, though his health deteriorated. Marching legions approached the city, abolishing memories of my kind. Kai, weakened, still held me, telling me everything would be all right.

When would I finally see his true self?

I shredded another layer, and another. Each time, I found the same Kai—weaker, smaller than before, but always smiling. He loved me completely.

With tears in my eyes, I removed one last layer.

Lying on the bed, in the room above the bakery, was the same man who’d brought me a honey-cake and shared his raspberry tart. He died holding my hand.

For years I sought love, thinking I knew who I was. But with Kai dead by my hand, I’ve finally seen my innermost layer. My worshipers were right all along.

I stand on Kai’s balcony, watching the advancing armies, sun low at their backs. I could flee and prolong the inevitable, but why? At my heart, I’m the darkness of this world. I understand that now. And soon, so will the rest.

The sun sets. I shred my final layer. Night’s army approaches, and I drift from the balcony to meet them. 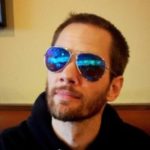 Zach Shephard's fiction is generally either bleak or humorous, without much of a middle-ground. His stories have appeared in places like Fantasy & Science Fiction, Flash Fiction Online and the Unidentified Funny Objects anthology series; for a complete list of published works, check out www.zachshephard.com.